At a minute past noon, moments after the driver left the scene, the timer-set bomb exploded. The wagon and horse were blasted to bits, as automobiles were hurled through the air and iron weights tore through the late Summer crowd.  Thirty-eight people were killed in the blast, mostly young people – messengers, stenographers, clerks and brokers.  Hundreds more were maimed, 143 of those, grievously.

In the heart of the Financial District in Manhattan, at the corner of Wall Street & Broad stands an office building, commonly known as “The Corner”.

Once owned by J.P. Morgan & Co., 23 Wall Street was designated a New York City landmark in 1965, and later added to the National Register of Historic Places.

On this day in 1920, the horse-drawn wagon passed by lunchtime crowds and stopped outside the Financial District’s busiest corner. Inside the wagon was one-hundred pounds of dynamite, and five-hundred pounds of cast iron sash weights, designed to act as shrapnel.

At a minute past noon, moments after the driver left the scene, the timer-set bomb exploded. The wagon and horse were blasted to bits, as automobiles were hurled through the air and iron weights tore through the late Summer crowd.  Thirty-eight people were killed in the blast, mostly young people – messengers, stenographers, clerks and brokers.  Hundreds more were maimed, 143 of those, grievously. 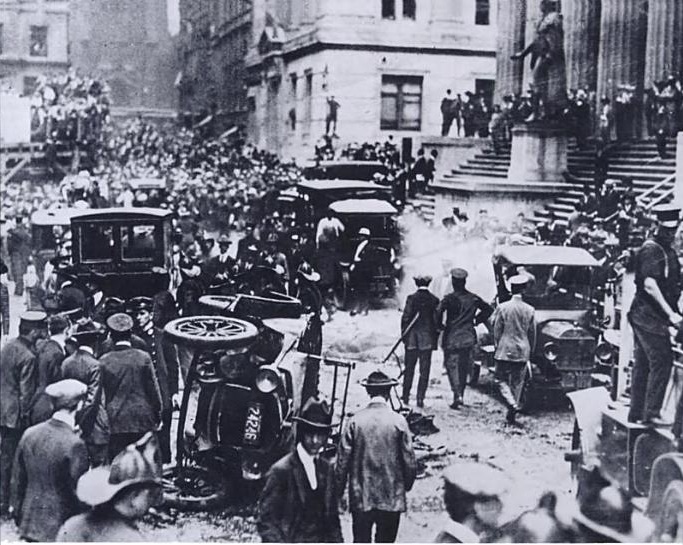 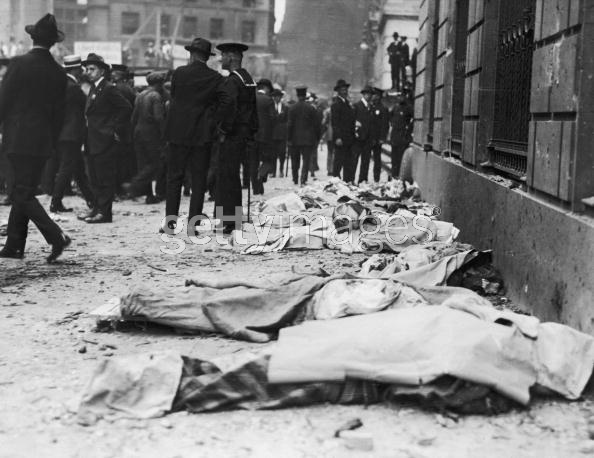 A life-long anarchist and radical subversive, the 40-year-old Luigi Galleani was repeatedly incarcerated and/or deported from his native Italy, Switzerland, France and Egypt, before emigrating to the United States in 1901.

There, Galleani harangued and criticized “timid” socialists, organizing immigrant labor communities and agitating for the “propaganda of the deed”, direct action to overthrow the institutions of civil society and the market economy.

Luigi Galleani was specific.  He wanted violence, and the man was every bit the fire-breather in person, as he was in his writing.  Carlo Buda, brother of Galleanist bombmaker Mario Buda, said of Galleani, “You heard Galleani speak, and you were ready to shoot the first policeman you saw“.

Mario Buda was responsible for the Milwaukee Police Station bombing in 1917, an event which accounted for the largest single-incident loss of life in the history of United States law enforcement, until 9/11.

Historians believe that Galleanists began their bombing campaign in 1914, after police forcibly dispersed a protest outside the home of John D. Rockefeller, in Tarrytown, New York.  A series of bombs over the next several months, destroyed churches, police stations and businesses.

A bomb was placed under the seat of a judge that November, who’d sentenced an anarchist for inciting to riot. Two months later, New York police uncovered a plot to blow up St. Patrick’s Cathedral.

In 1916, Chicago police hunted for Chef Nestor Dondoglio, who’d poisoned 100 guests at a banquet to honor Archbishop George Mundelein. Quick thinking and a hastily prepared emetic by a physician among the guests prevented any fatalities, but Dondoglio himself was never apprehended.

Bombings occurred at dozens of sites throughout late 1917 and into 1918, in New York, San Francisco, Washington, D.C., Boston, and Milwaukee, and always accompanied by the leaflets, denouncing “the priests, the exploiters, the judges and police, and the soldiers” whose time was coming to an end.

Galleani spoke before an anarchist group in Taunton, Massachusetts in February 1919.  The following night, four of them attempted to place a bomb at the American Woolen Company’s mill in nearby Franklin, where workers were on strike. That time, the bomb went off prematurely, and killed all four of them.

That April, Galleani followers attempted to assassinate Woodrow Wilson’s Attorney General Alexander Mitchell Palmer, with a bomb mailed to his home in Washington, DC.  The package was intercepted and defused but, not to be deterred, the group tried again that June.  This time, the bomb was delivered in person by anarchist Carlo Valdinoci, who screwed something up and died in a blast so powerful, that it hurled the neighbors from their beds..

AG Palmer and his family were shaken but unhurt, though the blast mostly destroyed their home.  Valdinoci’s remains rained down over an area of several city blocks.

In that one month alone, Italian anarchists mailed no fewer than 36 dynamite bombs to prominent political and business leaders.

One package was discovered because plotters had failed to add sufficient postage.  Fortunately, most of the others were found out, as the packaging was identical.  Most were never delivered but one blew off the hands of a housekeeper, working at the home of Senator Thomas W. Hardwick, a sponsor of the Immigration Act of 1918. 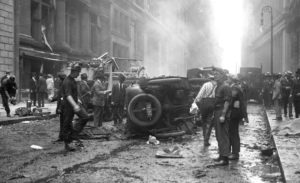 That June, another nine far more powerful bombs used up to twenty-five pounds of dynamite, for the first time introducing the use of metal slugs, to add to the bomb’s lethality. The intended victims were all political figures who’d supported anti-sedition or deportation legislation including AG Palmer himself, or judges who’d sentenced anarchists to long prison terms.  None were successful, though one killed a 70-year-old night watchman, who stopped to check a suspicious package on the doorstep of judge Charles Nott.

Today, the period is derisively referred to as the first “Red Scare”.  At the time, the American public clamored for action.  Attorney General Palmer attempted to suppress these radical organizations in 1919-’20, but his “Palmer Raids” were often illegal, his arrests and detentions without warrant, and many of his deportations, questionable. 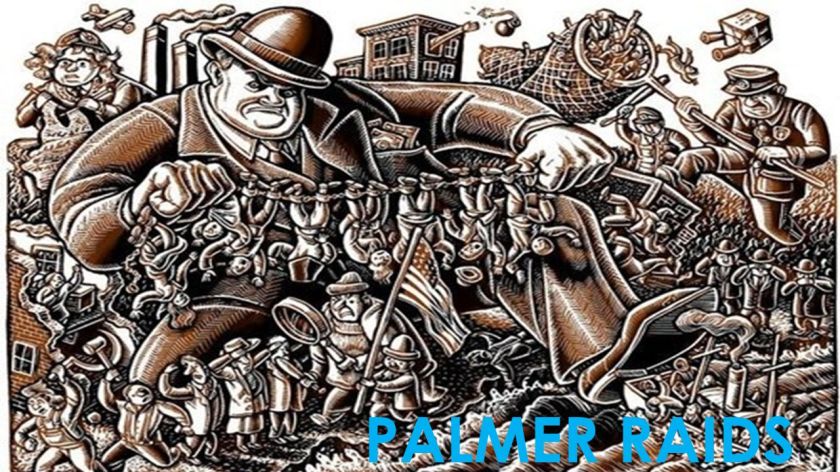 The 1920 arrest and subsequent execution of Italian-born American anarchists Nicola Sacco and Bartolomeo Vanzetti for the robbery and murder of two men in Braintree Massachusetts, remains controversial, to this day. Many blamed “anti-Italian” and “anti’immigrant” bias for the executions. Fifty years later, Massachusetts Governor Michael Dukakis proclaimed that Sacco and Vanzetti had been unfairly tried and convicted and that “any disgrace should be forever removed from their names”.

The Governor’s proclamation failed to note the 1927 attempts on the lives of Sacco & Vanzetti’s executioner Robert Elliott, nor that of Webster Thayer, trial judge in the Sacco-Vanzetti case. A second explosions at the Thayer home in 1932 destroyed the front of the house, and injured judge Thayer’s wife and housekeeper. Judge Thayer himself lived the rest of his life at a club at Boston University, under 24-hour guard.

The Wall Street bombing, carried out ninety-eight years ago today, was never solved.