The young Patriot, untrained and unskilled in the ways of deception, placed his trust where it did not belong.

From the earliest days of the American Revolution, the Hale brothers of Coventry Connecticut, fought for the Patriot side. Five of them helped to fight the battles at Lexington and Concord. The youngest and most famous brother was home in New London at the time, finishing the terms of his teaching contract.

Nathan Hale’s unit would participate in the siege of Boston, Hale himself joining George Washington’s army in the spring of 1776, as the army moved to Long Island to block the British move on the strategically important port city of New York.

General Howe appeared at Staten Island on June 29 with a fleet of 45 ships. By the end of the week, he’d assembled an overwhelming fleet of 130.

There was an attempt at peaceful negotiation on July 13, when General Howe sent a letter to General Washington under flag of truce. The letter was addressed “George Washington, Esq.”, intentionally omitting Washington’s rank of General. Washington declined to receive the letter, saying that there was no one there by that address. Howe tried the letter again on the 16th, this time addressing it to “George Washington, Esq., etc., etc.”. Again, Howe’s letter was refused.

The next day, General Howe sent Captain Nisbet Balfour in person, to ask if Washington would meet with Howe’s adjutant, Colonel James Patterson. A meeting was scheduled for the 20th.

Patterson told Washington that General Howe had come with powers to grant pardons. Washington refused, saying “Those who have committed no fault want no pardon”.

Patriot forces were comprehensively defeated at the Battle of Brooklyn, fought on August 27, 1776. With the Royal Navy in command on the water, Howe’s army dug in for a siege, confident that his adversary was trapped and waiting to be destroyed at his convenience.

On the night of August 29-30, Washington withdrew his army to the ferry landing and across the East River, to Manhattan.

With horse’s hooves and wagon wheels muffled and oarlocks stuffed with rags, the Patriot army withdrew as a rearguard tended fires, convincing the redcoats in their trenches that the Americans were still in camp.

The surprise was complete for the British side, on waking for the morning of the 30th. The Patriot army, had vanished.

The Battle of Long Island would almost certainly have ended in disaster for the cause of Liberty, but for that silent evacuation over the night of August 29-30.

Expecting a British assault in September, General Washington was desperate for information on the movements of his adversary.  Washington asked for volunteers for a dangerous mission, to go behind enemy lines, as a spy.  One volunteer stepped up, on September 10. His name was Nathan Hale.

Hale set out the same day, disguised as a Dutch schoolmaster. He was successful for about a week but appears to have been something less than “street smart”. The young Patriot, untrained and unskilled in the ways of deception, placed his trust where it did not belong. 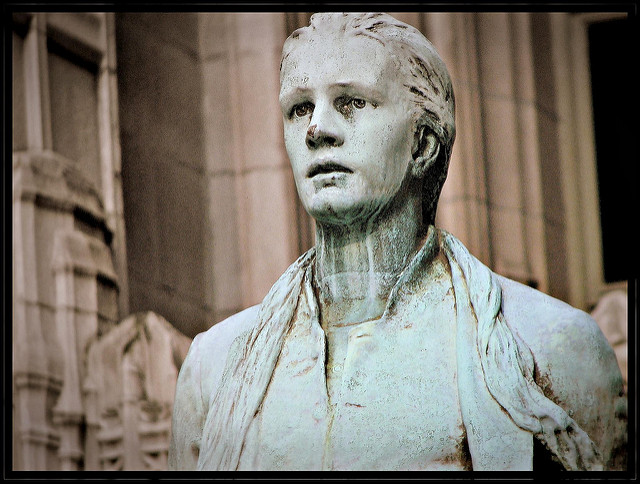 Major Robert Rogers was an old British hand, a leader of Rangers during the earlier French and Indian War. Rogers must have suspected that this Connecticut schoolteacher was more than he pretended to be, and intimated that he himself, was a spy in the Patriot cause.

Hale took Rogers into his confidence, believing the two to be playing for the same side. Barkhamsted Connecticut shopkeeper Consider Tiffany, a British loyalist and himself a sergeant of the French and Indian War, recorded what happened next, in his journal: “The time being come, Captain Hale repaired to the place agreed on, where he met his pretended friend” (Rogers), “with three or four men of the same stamp, and after being refreshed, began [a]…conversation. But in the height of their conversation, a company of soldiers surrounded the house, and by orders from the commander, seized Captain Hale in an instant. But denying his name, and the business he came upon, he was ordered to New York. But before he was carried far, several persons knew him and called him by name; upon this he was hanged as a spy, some say, without being brought before a court martial.”

The Irish tailor Hercules Mulligan had far greater success reporting on British goings-on, and twice saved General Washington himself, from capture.   This Patriot who converted Alexander Hamilton from Tory to Patriot.  The secret member of the Sons of Liberty who, for seven years worked behind enemy lines.  Yet today, we barely remember the man’s name.. Hercules Mulligan earned the right to be remembered, as a hero of American history.  His will be a story for another day.

Nathan Hale, the schoolteacher-turned-spy who placed his trust where it didn’t belong,  was brought to the gallows on September 22, 1776, and hanged. He was 21. CIA.gov describes him as “The first American executed for spying for his country”.

There was no official record taken of Nathan Hale’s last words, yet we know from eyewitness statement, that the man died with the same clear-eyed personal courage, with which he had lived.

British Captain John Montresor was present at the hanging, and spoke with American Captain William Hull the following day, under flag of truce.  He gave the following account:

“‘On the morning of his execution, my station was near the fatal spot, and I requested the Provost Marshal to permit the prisoner to sit in my marquee, while he was making the necessary preparations. Captain Hale entered: he was calm, and bore himself with gentle dignity, in the consciousness of rectitude and high intentions. He asked for writing materials, which I furnished him: he wrote two letters, one to his mother and one to a brother officer.’ He was shortly after summoned to the gallows. But a few persons were around him, yet his characteristic dying words were remembered. He said, ‘I only regret, that I have but one life to lose for my country‘.