Michelangelo was that insufferably cocky kid who wasn’t bragging. He could deliver. 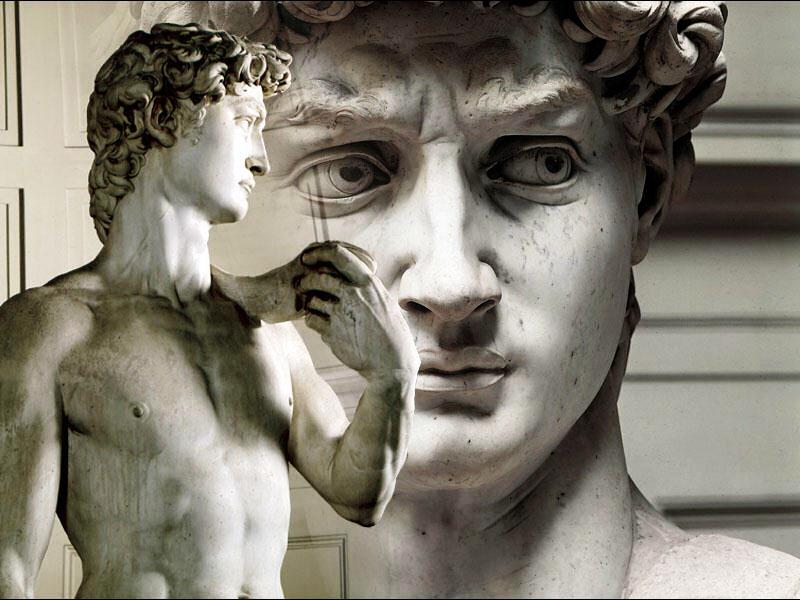 The Renaissance has been variously described as an advance beyond the dark ages, and a nostalgic period looking back to the Classical age. Whatever it was, the 15th and 16th centuries produced some of the most spectacularly gifted artists, in history.

None more so, than the Italian Masters.

There was Leonardo and Donatello, Raphael, Brunelleschi and Botticelli. Yet, only one among them would have his biography written, while he was still alive. Michelangelo di Lodovico Buonarroti Simoni, had two. Only one of these men would have his home town renamed, after himself. Today, the Tuscan village of Caprese is known as Caprese Michelangelo. 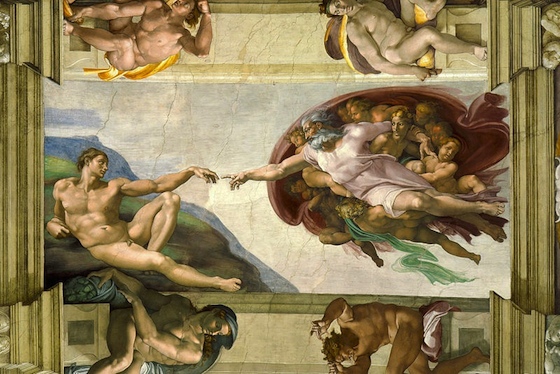 To look at the ceiling of the Sistine Chapel, is to disbelieve that the artist who could produce such a work, didn’t care for painting.  In his heart and soul, Michelangelo was a sculptor. “Along with the milk of my nurse,” he would say, “I received the knack of handling chisel and hammer, with which I make my figures”.

He was “Il Divino”, “The Divine One”, literally growing up with the hammer and chisel. He had a “Terribilità” about him, an awe-inspiring sense of grandeur which made him difficult to work with, but for which he was at the same time, widely admired and imitated. Michelangelo was that insufferably cocky kid who wasn’t bragging.  He could deliver.

The massive block of Carrara marble was quarried in 1466, nine years before Michelangelo was born. The “David” commission was given to artist Agostino di Duccio that same year. So difficult was this particular stone that Duccio never got beyond roughing out the legs and draperies. Antonio Rossellino took a shot at it 10 years later, but didn’t get much farther.

25 years later, the Guild of Wool Merchants wanted to revive the abandoned project, and went looking for an artist. The now infamously difficult marble slab had deteriorated for years in the elements, when Michelangelo stepped forward at the age of 26. The prevailing attitude seems to have been yeah, give it to the kid. That will take him down a  peg or two.

Michelangelo began work on September 13th, 1501. His master work would take him three years to complete, nearly to the day. 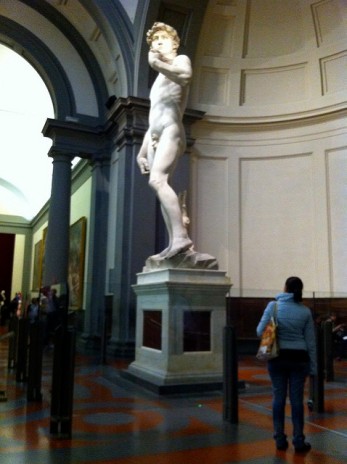 The 17′, six-ton David was originally intended for the roof of the Florence Cathedral, but it wasn’t feasible to raise such an object that high. A committee including Leonardo da Vinci and Sandro Botticelli was formed to decide on an appropriate site for the statue. The committee chose the Piazza della Signoria outside the Palazzo Vecchio, the town hall of Florence.

It took four days on a specially constructed cart to move the David statue into position.  The unveiling took place on September 8, 1504. Among the dignitaries gathered for the occasion was the Mayor of Florence, Vasari Pier Soderini, who complained that David’s nose was “too thick”.

On some other day and time, a man such as Michelangelo may have invited the Lord Mayor, to perform an anatomically improbable act.  On this occasion, the artist climbed the statue with a handful of marble dust, sending down a shower of the stuff as he pretended to work on the nose. After several minutes, he stepped back and asked Soderini if the work was improved. “Yes”, replied the Mayor, now satisfied. “I like it better. You have given it life”.