These days, you hear a lot about Post-Traumatic Stress Disorder (PTSD). In Murphy’s Day, they called it “Battle Fatigue”, or “Shell Shock”. Murphy would spend a 21-year post-war career in Hollywood and, until his death in a plane crash in 1971, his post-war life was never free of it

Audie Leon Murphy attempted to enlist in the Armed Services after the Japanese attack on Pearl Harbor, but the Marine Corps, Navy and the Army all turned him down for being underweight and under age. After a change in diet to “fatten” up, Murphy appeared at a Dallas recruiting station on June 30, 1942 with a sworn affidavit from his sister, inflating his age by a year. It was 10 days past his 17th birthday when Murphy, all 5’5½” and 112 lbs of him, enlisted in the US Army.

Murphy’s company commander thought he was too small for infantry service, and attempted to transfer him to cook and bakers’ school. Murphy refused.  He wanted to become a combat soldier. 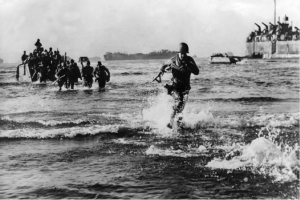 Joining the 3rd Infantry Division of George S. Patton’s 7th Army, Murphy participated in amphibious landings in Sicily in July, fighting in nearly every aspect of the Italian campaign. From Palermo to Messina and on to Naples, Anzio and Rome, the Germans were driven out of the Italian peninsula in savage and near continuous fighting that killed a member of my own family.  By mid-December, the 3rd ID suffered 683 dead, 170 missing, and 2,412 wounded. Now Sergeant Murphy was there for most of it, excepting two periods when he was down with malaria.

Two months after the “Overlord” landings in the north of France, elements of the 7th Army landed in southern France in an operation called “Dragoon”. By mid-September, only three of Company B’s original roster remained, the rest either killed or removed due to wounds or illness. It was around this time when Murphy received his first Purple Heart.  A mortar blast resulted in a heel wound that wasn’t very serious, but a far more dangerous hip wound followed from a sniper in December. He repaid it with a bullet between the German’s eyes.

Murphy was still in the hospital when his unit moved into the Vosges Mountains. The 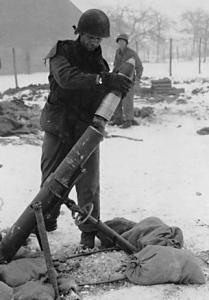 “Colmar Pocket” was an 850 square mile area held by German troops: Murphy described it as “a huge and dangerous bridgehead thrusting west of the Rhine like an iron fist. Fed with men and materiel from across the river, it is a constant threat to our right flank; and potentially it is a perfect springboard from which the enemy could start a powerful counterattack.”

Rejoining his unit in January, now Lieutenant Murphy became Company Commander, being the only officer remaining in the Company. Disease, wounds and casualties had reduced company B’s fighting strength by this time from an original 235 to 18.

What remained of the unit was awaiting reinforcements on January 26, 1945, as a combined force of German infantry and armor assembled itself outside of town. “I see the Germans lining up for an attack”, said Murphy. “Six tanks rumble to the outskirts of Holtzwihr, split into groups of threes, and fan out toward either side of the clearing. Then wave after wave of white dots, barely discernible against the background of snow, start across the field. They are enemy infantrymen”. 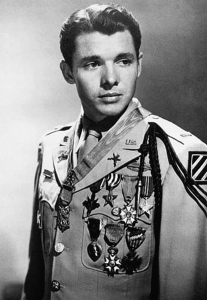 Let Murphy’s Medal of Honor Citation describe what happened next: “Second Lieutenant Audie L. Murphy, 01692509, 15th Infantry, Army of the United States, on 26 January 1945, near Holtzwihr, France, commanded Company B, which was attacked by six tanks and waves of infantry. Lieutenant Murphy ordered his men to withdraw to a prepared position in a woods while he remained forward at his command post and continued to give fire directions to the artillery by telephone. Behind him to his right one of our tank destroyers received a direct hit and began to burn. Its crew withdrew to the woods. Lieutenant Murphy continued to direct artillery fire which killed large numbers of the advancing enemy infantry. With the enemy tanks abreast of his position, Lieutenant Murphy climbed on the burning tank destroyer which was in danger of blowing up any instant and employed its .50 caliber machine gun against the enemy. He was alone and exposed to the German fire from three sides, but his deadly fire killed dozens of Germans and caused their infantry attack to waver. The enemy tanks, losing infantry support, began to fall back. For an hour the Germans tried every available weapon to eliminate Lieutenant Murphy, but he continued to hold his position and wiped out a squad which was trying to creep up unnoticed on his right flank. Germans reached as close as 10 yards only to be mowed down by his fire. He received a leg wound but ignored it and continued the single-handed fight until his ammunition was exhausted. He then made his way to his company, refused medical attention, and organized the company in a counterattack which forced the Germans to withdraw. His directing of artillery fire wiped out many of the enemy; he personally killed or wounded about 50. Lieutenant Murphy’s indomitable courage and his refusal to give an inch of ground saved his company from possible encirclement and destruction and enabled it to hold the woods which had been the enemy’s objective”.

These days, you hear a lot about Post-Traumatic Stress Disorder (PTSD).  In Murphy’s Day, they called it “Battle Fatigue”, or “Shell Shock”.  Murphy would spend a 21-year post-war career in 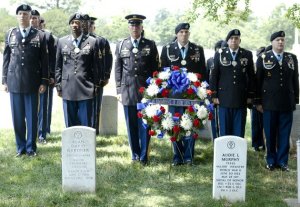 Hollywood and, until his death in a plane crash in 1971, his post-war life was never free of it.

I wonder about the term, “Disorder”.  That makes it sound like there’s something wrong with these guys.

When a soldier experiences an event, so traumatic that the very memory of it causes pain, I don’t understand how that can be characterized as a “disorder”. To me that seems like the properly functioning conscience of a good man, recoiling in horror at what he’s seen in service to his country.

I don’t know the answer to PTSD-related suicide, I don’t even know the right question.  It seems to me that the only “disorder” belongs to that fraction of a percent who remain unaffected by the horrors of war.