It was Easter Monday, March 30, 1282. The Church of the Holy Spirit outside Palermo was just letting out after evening vespers (prayers), when a French soldier thought he’d “inspect” a Sicilian woman for weapons. 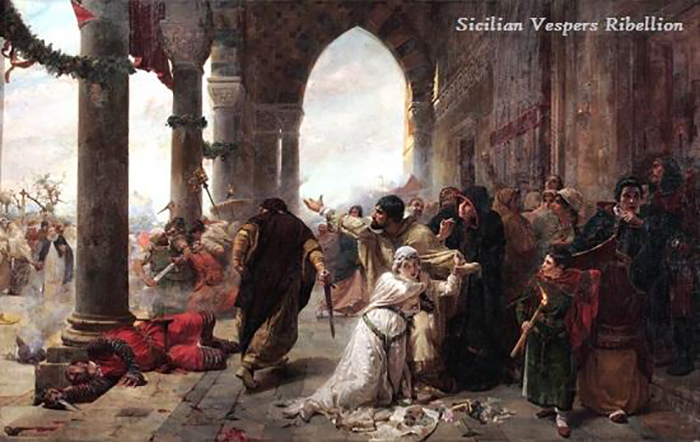 Since the early 12th century, the southern Italian peninsula and the island of Sicily had been united as the Kingdom of Sicily. Until the invasion of the French King Charles I of Anjou, who ousted Sicilian King Manfred in 1266.

The Anjou King’s rule in Sicily was vicious and repressive, with the French King himself absent for long periods. Charles’ Sicilian subjects could not have hated him more.

It was Easter Monday, March 30, 1282. The Church of the Holy Spirit outside Palermo was just letting out after evening vespers (prayers), when a French soldier thought he’d “inspect” a Sicilian woman for weapons.

Accounts vary as to what happened, but there’s a good chance he was just looking for a feel, and that’s what he got. The lady’s modesty thusly offended, someone in the crowd avenged her honor, knifing the French guard.

At first merely agitated, this first taste of blood drove the mob to a frenzy. Spreading across the Capital and into the countryside, Sicilians killed every Frenchman they could get their hands on.

Revolutionaries devised a linguistic test, to see who was authentically Sicilian. Native French speakers can’t pronounce the word “ciciri”, even to save themselves. And that’s the way it worked out.  God help you if you couldn’t say that word. Over four thousand Frenchmen would die over the next six weeks.

Meanwhile in Spain, Peter III King of Aragon, Peter I King of Valencia, and Peter II Count of Barcelona (these three are all the same guy), had a claim to the Sicilian throne through his wife, Constance.

The Italian physician John of Procida had been a loyal subject of Manfred’s, fleeing to Aragon after the Anjou invasion. John proceeded directly to Sicily where he spent several weeks stirring up Sicilian resentment against the French King. Sicily then appealed to the Spanish King to intervene, while John sailed for Constantinople to procure the help of Michael VIII Palaeologus.

History records what followed as the War of Sicilian Vespers. The Angevins were supported by the Papacy and his Italian supporters (Guelphs), while the Aragonese received help from Sicily itself, the Byzantine Emperor, and the Ghibellines, Italian supporters of the Holy Roman Emperor.

Several players changed sides over the course of the next twenty years. In the end, the son of the Spanish King took the Sicilian crown in 1302, becoming King Frederick II, beginning near 400 years of Spanish rule over the island.

And so it was that a French soldier molested an Italian woman, and lost the kingdom of Sicily, to Spain.