Behind the scenes, the vice president secretly corresponded with the British and Spanish Ministers to the United States, offering in the first case to detach Louisiana from the Union and in the second, to orchestrate an overthrow, of Mexico.  He himself would do nicely to found the new dynasty, thank you very much, for asking. 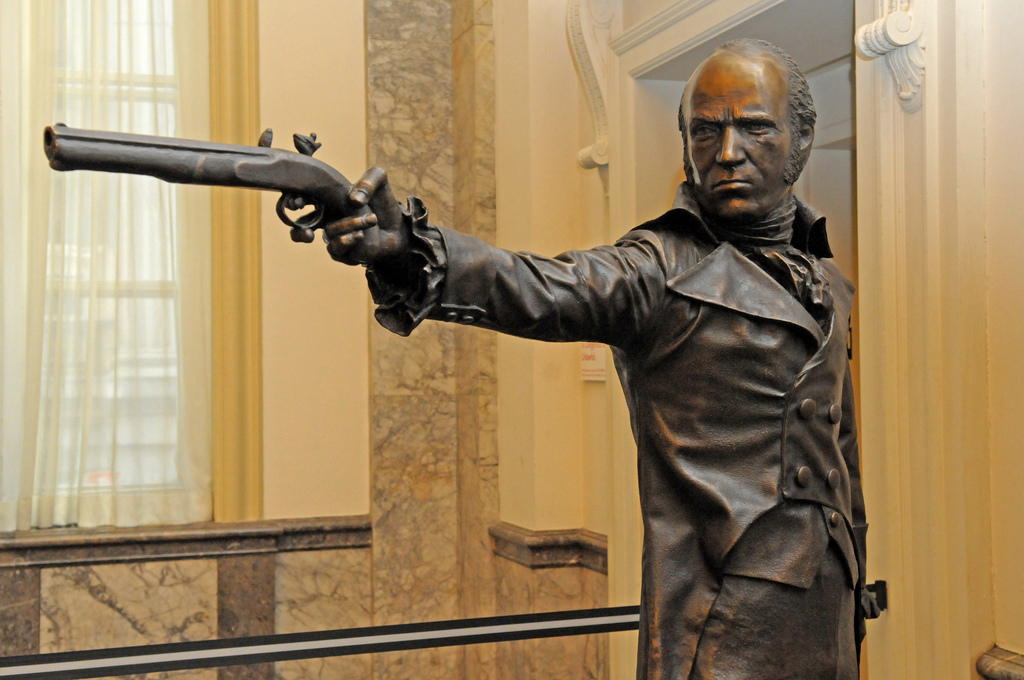 What would it be like to turn on CNN or Fox News, to learn that Former Secretary of the Treasury Jacob Lew had been party to a duel, and he was near death after being shot by Vice President Mike Pence.

The animosity between the two went back to the Senate election of 1791, and escalated during one of the ugliest election seasons in American history.  It’s been called the “Revolution of 1800”, the election pitting Democratic-Republican candidate Thomas Jefferson, against one-term incumbent John Adams, of the Federalist party.

Both sides were convinced beyond doubt, that the other side would destroy the young nation. Federalists attacked Jefferson as an un-Christian deist, a populist whose sympathies with the French Revolution would bring about a similar cataclysm in the young American Republic. Democratic-Republicans criticized the alien and sedition acts, and the deficit spending the Adams administration employed to support Federal policy.

“The father of modern political campaigning”, Aaron Burr had long since enlisted help from New York’s Tammany Hall, transforming what was then a social club into a political machine.  The election was a decisive victory for the Democratic-Republicans.  Not so much for the candidates themselves.

The electoral vote tied at 73 between Jefferson and Burr, moving the selection to the House of Representatives. Hamilton exerted influence on behalf of Jefferson, who was elected on the 36th ballot.  Aaron Burr was relegated to the vice-Presidency.

John Nance Garner served as 32nd vice president between 1931 – ’41. With precisely zero influence over Presidential authority, Garner described the position as “not worth a bucket of warm piss”.  The sentiment is cleaned up and commonly retold as, “warm spit”.

A man with the towering ambition of Aaron Burr could certainly relate.  Behind the scenes, the vice president secretly corresponded with the British and Spanish Ministers to the United States, offering in the first case to detach Louisiana from the Union and in the second, to orchestrate an overthrow, of Mexico.  He himself would do nicely to found the new dynasty.  Thank you very much, for asking.

We’re accustomed today to the idea of “Judicial Review”, the idea that Supreme Court decisions are final and inviolate, but that wasn’t always the case. The landmark Marbury v Madison decision established the principle in 1803, a usurpation of power so egregious to Democratic-Republicans, as to bring about the impeachment of Associate Justice Samuel Chase, a signer of the Declaration of Independence.

As VP, Burr presided over Chase’ impeachment.  It was the high point of the only term he would ever serve.

Relations were toxic between Jefferson and Burr.  The VP knew he wouldn’t be around for the 1804 re-election campaign, so he ran for Governor of New York, losing in a landslide to a virtual unknown, Morgan Lewis.

It was a humiliating defeat.  Burr blamed Alexander Hamilton over comments made during the election, and challenged him to a duel.  Dueling was illegal at this time but enforcement was lax in New Jersey. The pair rowed across the Hudson River with their “seconds”, meeting at the waterfront town of Weehawken. It was July 11, 1804. Hamilton “threw away” his shot, firing into the air. Aaron Burr shot to kill. 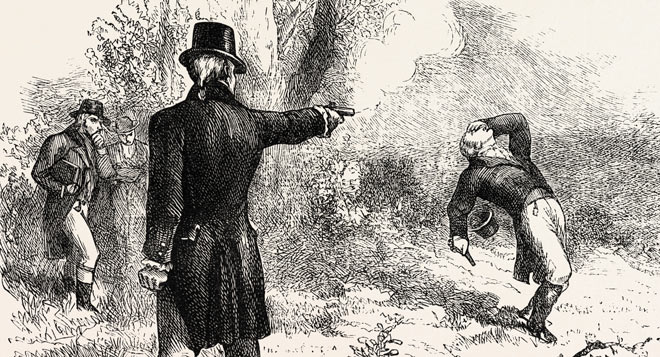 Murder charges were filed in both New York and New Jersey, but neither went to trial.

Aaron Burr went on to preside over Justice Chase’ impeachment, the high point of a career otherwise ended, the day he met Alexander Hamilton in Weehawken.

Burr headed for New Orleans where he got mixed up with one General James Wilkinson, one of the sleazier characters of the founding generation. At that time, Wilkinson was a paid agent for Spanish King Charles IV. 100 years later Theodore Roosevelt would say of Wilkinson, “In all our history, there is no more despicable character.”

Wilkinson took his payments in silver dollars, hidden in rum, sugar and coffee casks. All those clinking coins nearly undid him, when a messenger was caught and killed with 3,000 of them. The messenger’s five murderers were themselves Spaniards, who testified at trial the money belonged to the spy, James Wilkinson. Payment for services rendered to their King. Wilkinson’s luck held, as the killers spoke no English. Thomas Power, interpreter for the Magistrate, was another Spanish spy. He threw those guys so far under the bus, they’d never get out: ‘They just say they’re wicked murderers motivated by greed.’

The nature of Burr’s discussions with Wilkinson is unclear but, in 1806, Burr led a group of armed colonists toward New Orleans, with the apparent intention of snatching the territory and turning the place into an independent Republic. It’s probably safe to assume that Aaron Burr saw himself at the head of such a Republic.

Seeing no future in it and wanting to save his own skin, General Wilkinson turned on his former ally, sending dispatches to Washington accusing the former Vice President of treason. Burr was tracked down in Alabama on February 19, 1807, arrested for treason and sent to Richmond, Virginia, for trial. 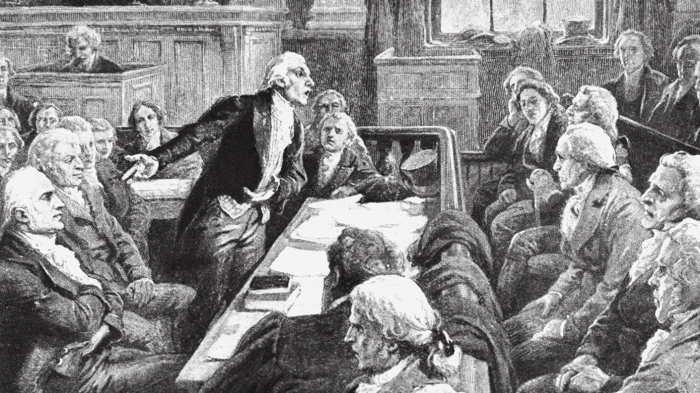 The size and shape of the “Burr Conspiracy” remain unclear, to this day.  Historians claim the Vice President intended to take parts of Texas and the Louisiana Purchase, forming his own independent Republic. Others claim he intended to conquer Mexico,  That Aaron Burr had a following among prominent politicians and soldiers is beyond question, but estimates of their numbers range from forty, to over seven-thousand.

Burr himself claims only to have wanted the 40,000 acres in the Texas Territory, deeded him by the Spanish crown.  On this there is no uncertainty.  The lease still exists.

Burr was acquitted on September 1, on grounds he had not committed an “overt act” as specified in the Constitution. He was not guilty in the eyes of the law, but the court of public opinion would forever regard him as traitor. Aaron Burr spent the next several years in Europe before returning to New York, and resuming his law practice. 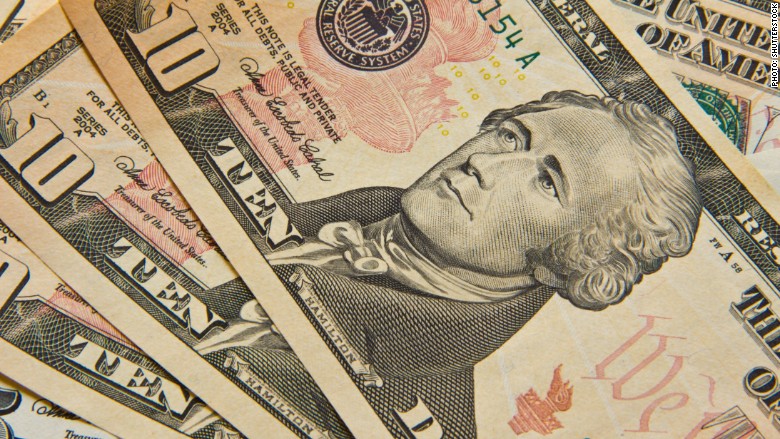