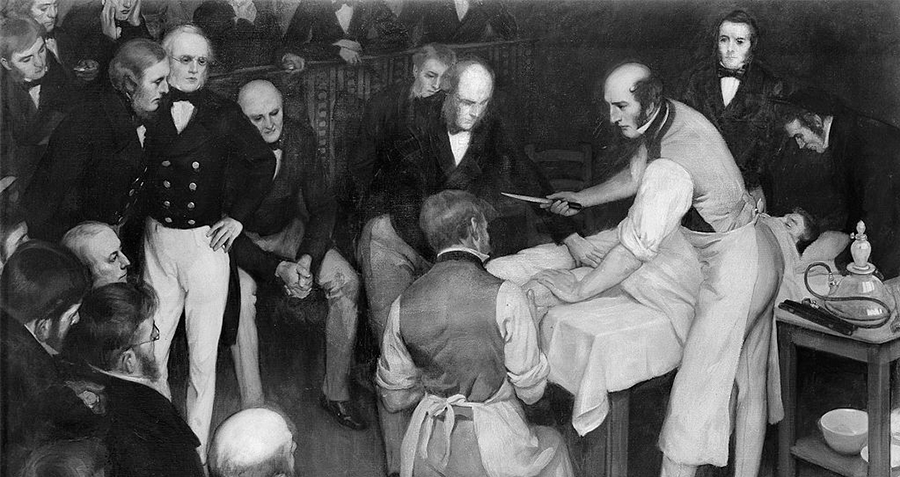 With the invention of gunpowder in the year 142, the Chinese of the Eastern Han Dynasty had a handy if somewhat noisy way, to scare off evil spirits.

The first millennium of the common era was a time of ever improved and more efficient ways for humans to slaughter one another, from the gunpowder slow match of 919 to the fire bombs and gunpowder propelled fire arrows of the Southern Tang, of 975.

The Wuwei Bronze Cannon of 1227 may be the first such weapon in all history.  By 1453, the terrifying bombard of the Ottoman Turks were capable of hurling stone balls up to 24.8-inches in diameter, more than enough to shatter the formerly impregnable Theodosian Walls of Constantinople.

For a thousand years, gunpowder weapons large and small businesses and a inflicted massive injury to the human frame, resulting in damage beyond even the skills of the modern surgeon.  Often the only answer was amputation, seemingly by the bushel basket.

The carnage of the gunpowder era experienced something of a golden age in the 19th century.  Projectiles traveled at a bone-shatteringly slow pace compared with the high velocity weapons of today while innovations such as percussion caps, shrapnel shells and breech loading weapons geometrically increased the rate of fire.

It’s been said the most common objects removed from the bodies of front-line soldiers, were the shattered bones and teeth of the next man in line.

This was a time before anesthesia, when the speed of the surgeon’s knife spelled the difference in the pain experienced by the patient, to say nothing of the poor unfortunates’ chance of survival.  Florence Nightingale explains in her Notes on Nursing:  “there are many physical operations where ceteris paribus” (everything else being the same) “the danger is in a direct ratio to the time the operation lasts; and ceteris paribus the operator’s success will be in direct ratio to his quickness“.

First came the burly assistants, to hold down the writhing victim

.  In skilled hands the surgeon’s knife could cut all-round in a single stroke, through skin and muscle and sinew clear down to the bone before the saw completed the work of separation.  Screams of agony rent the air as veins, flesh and arteries were cauterized with red-hot irons, vitriol (sulfuric acid) or boiling hot tar.  Should the victim survive the experience the wound would then be sewn shut.  God help the poor soul if there was any infection left after all that.

During the Franco-Prussian War of 1870 –’71, one surgeon amputated 200 shattered limbs in one 24-hour period, a nearly unbelievable average of one every seven minutes.  Perfectly healthy fingers were occasionally severed in the gore and confusion.

This was the world of the “Fastest Knife on West End”, a Scottish-born physician who, on this day in 1819, had just embarked on the first year of a medical career which would last until his death, in 1847.

Robert Liston, always the showman, would stride into the operating theater and call out, “Time me Gentlemen.  Time me”.  English surgeon and author Richard Gordon, an expert on Robert Liston, describes what that looked like:

“He was six foot two, and operated in a bottle-green coat with wellington boots. He sprung across the blood-stained boards upon his swooning, sweating, strapped-down patient like a duelist, calling, ‘Time me gentlemen, time me!’ to students craning with pocket watches from the iron-railinged galleries. Everyone swore that the first flash of his knife was followed so swiftly by the rasp of saw on bone that sight and sound seemed simultaneous. To free both hands, he would clasp the bloody knife between his teeth”. 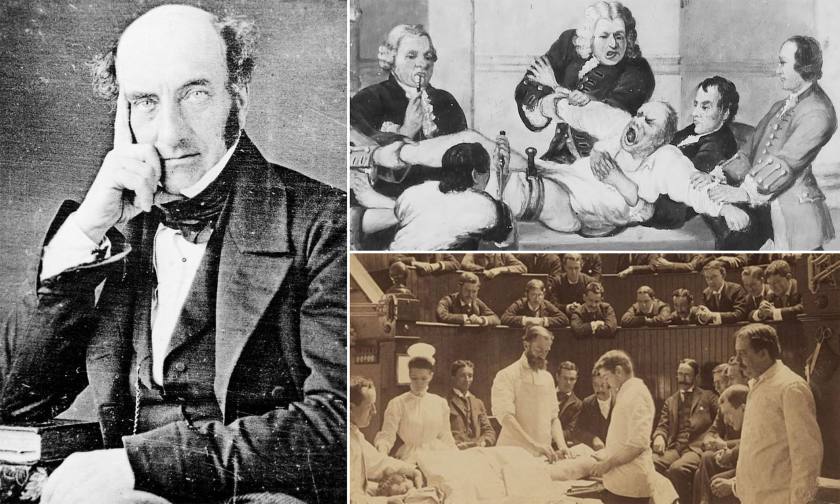 Liston once amputated a leg in 2½ minutes from incision to suture but accidentally severed the poor bastard’s testicles, in the process.

On another occasion, he amputated a leg in 2½ minutes while severing the fingers of one assistant and piercing the coat of an observer.  The spectator was so terrified at the blood and so certain that his own vital organs had been pierced, he died right then and there from heart failure.

Both patient and assistant later died from hospital gangrene, a common problem in the days before Joseph Lister.  To the best of my knowledge, Robert Liston remains the only surgeon in history to achieve 300% mortality, on a single procedure.