“If my countrymen do not rally to my relief, I am determined to perish in the defense of this place, and my bones shall reproach my country for her neglect.” 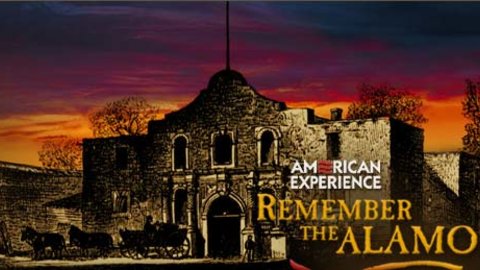 Following the Mexican War of Independence with Spain, (1810 – 1821), Texas became a part of Mexico.  In 1831, Mexican authorities gave the settlers of Gonzales a small swivel cannon, a defense against the raids of the Comanche.  The political situation deteriorated in the following years.  By 1835, several Mexican states were in open revolt.  That September, commander of “Centralist” (Mexican) troops in Texas Colonel Domingo de Ugartechea, came to take it back.

Dissatisfied with the increasingly dictatorial policies of President and General Antonio Lopez de Santa Anna, the colonists had no intention of handing over that cannon.  One excuse was given after another to keep the Mexican dragoons out of Gonzalez, while secret pleas for help went out to surrounding communities.  Within two days, 140 “Texians” had gathered in Gonzalez, fashioning a flag that echoed some 2,315 years through history, King Leonidas’ defiant response to the Persian tyrant, Xerxes:   “Come and Take it.” 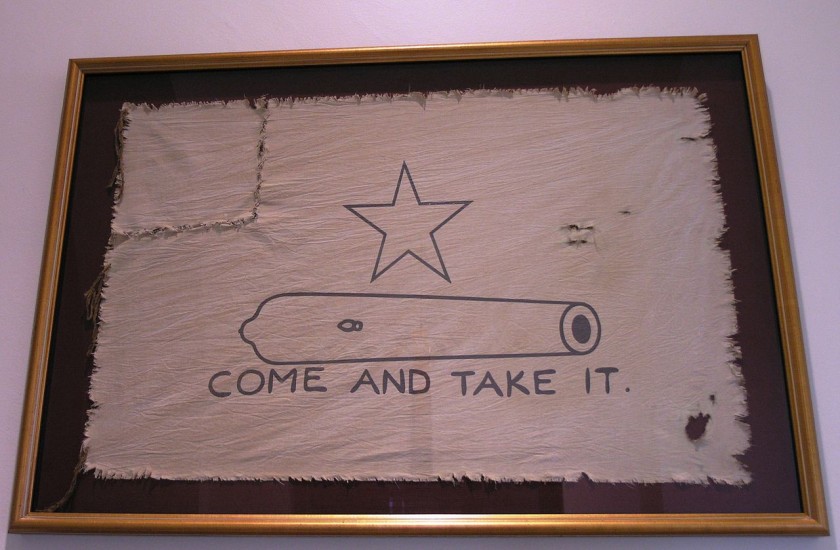 Settlers continued to gather, electing the well-respected local and former legislator of the Missouri territory Stephen F. Austin, as their leader.  Santa Anna sent his brother-in-law, General Martin Perfecto de Cos to reinforce the settlement of San Antonio de Béxar, near the modern city of San Antonio.  On the 13th, Austin led his Federalist army of Texians and their Tejano allies to Béxar, to confront the garrison.  Austin’s forces captured the town that December, following a prolonged siege. It was only a matter of time before Santa Anna himself came to take it back.

On March 2, 1836, the interim government of Texas signed the Texas Declaration of Independence.  The final assault on the Alamo began at 5:00am, four days later. 1,800 troops attacked from four directions.  600 to 1,600 were killed from concentrated artillery fire and close combat, but the numbers were overwhelming. Hand to hand fighting moved to the barracks after the walls were breached, and ended in the chapel. 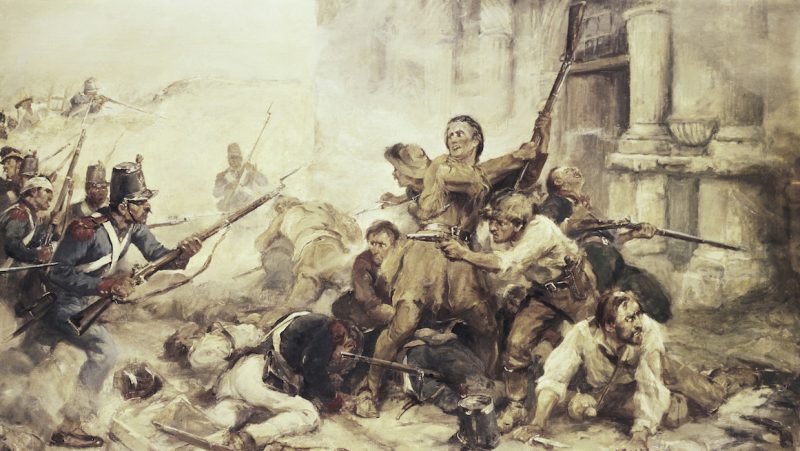 As many as seven defenders still lived when it was over, many believe that former Congressman Davy Crockett was among them. Santa Anna ordered them summarily executed. By 8:00am there were no survivors, except for a handful of noncombatant women, children, and slaves, slowly emerging from the smoking ruins. These were provided with blankets and two dollars apiece, and given safe passage through Mexican lines with the warning:  a similar fate awaited any Texan who continued in their revolt.

Three weeks later following the Battle of Coleto, 350 Texian prisoners were murdered by the Mexican army under direct orders from Santa Anna, an event remembered as the Goliad massacre.

The ranks of Sam Houston’s unit swelled with volunteers, as Houston’s army retreated eastward, along with the provisional government and hordes of civilians.  Houston’s green and inexperienced force of 1,400, were now all that stood on the side of Texan independence.

On April 21, a force of some 900 Texans shouting “Remember the Alamo!” & “Remember Goliad!” and led by Sam Houston defeated Santa Anna’s force of some 1,300 at San Jacinto, near modern day Houston.  In “one of the most one-sided victories in history” 650 Mexican soldiers were killed in eighteen minutes and another 300 captured, compared with 11 Texians dead and another 30 wounded, including Houston itself.    Mexican troops occupying San Antonio were ordered to withdraw, by May.

Intermittent conflicts continued into the 1840s between Texas and Mexico, but the outcome was never again placed in doubt.  Texas became the 28th state of the United States on December 29, 1845.

As for Santa Anna, he went on to lose a leg to a cannon ball two years later, fighting the French at the Battle of Veracruz. Following amputation, the leg spent four years buried at Santa Anna’s hacienda, Manga de Clavo. When Santa Anna resumed the presidency in late 1841, he had the leg dug up and placed in a crystal vase, brought amidst a full military dress parade to Mexico City and escorted by the Presidential bodyguard, the army, and cadets from the military academy. This guy was nothing if not a self-promoter. 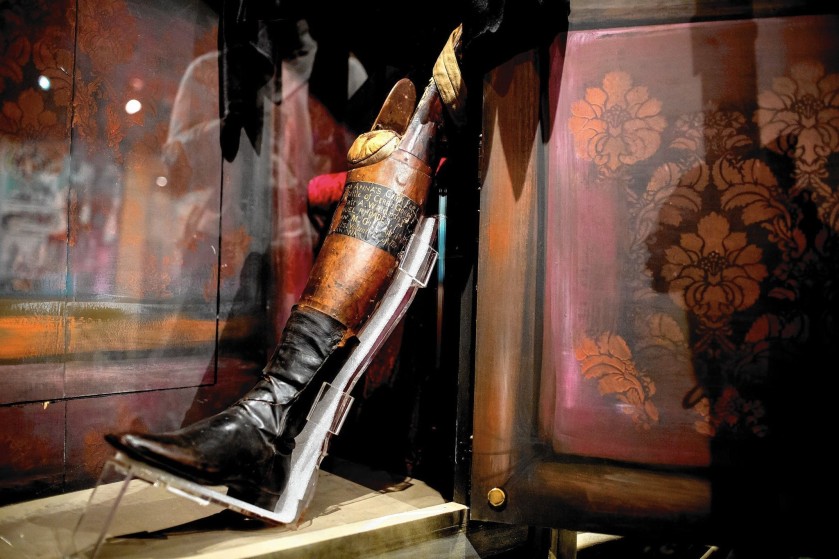 Antonio Lopez de Santa Anna served 11 non-consecutive terms as Mexican President, spending most of his later years in exile in Jamaica, Cuba, the United States, Colombia, and St. Thomas. In 1869, the 74-year-old former President was living in Staten Island, trying to raise money for an army to return and take over Mexico City. Santa Anna is credited with bringing the first shipments of chicle to America, a gum-like substance made from the tree species, Manilkara chicle, and trying to use the stuff as rubber on carriage tires.

Thomas Adams, the American assigned to aid Santa Anna while he was in the US, also experimented with chicle as a substitute for rubber. He bought a ton of the stuff from the General, but his experiments would likewise prove unsuccessful. Instead, Adams helped to found the American chewing gum industry with a product called “Chiclets”.