Roughly 90% of all earthquakes and 75% of potentially active volcanoes in the world, occur along a horseshoe shaped Ring of Fire, encircling the Pacific Ocean. 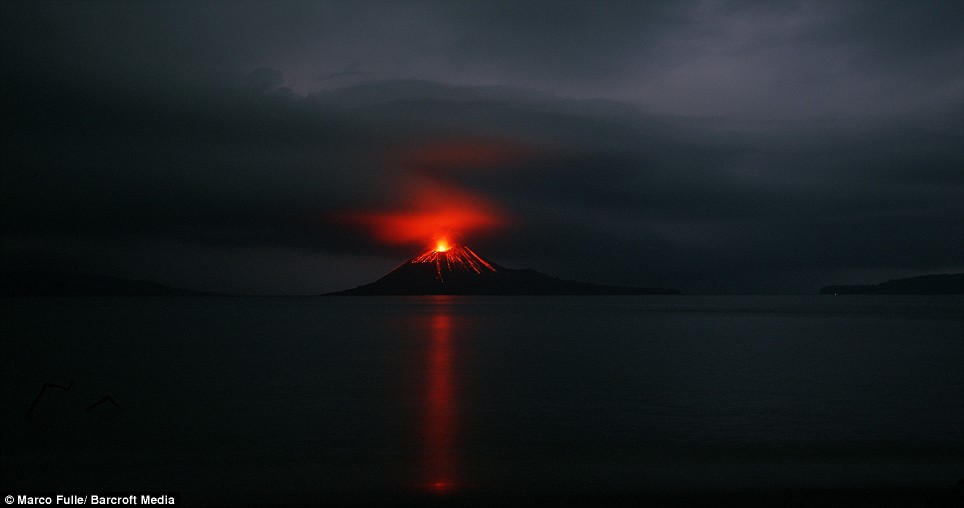 Within living memory, the “greatest generation” fought the most destructive war, in human history. Had any of them survived the experience, the parents and grandparents of that generation could’ve gazed into the abyss, at a force capable of breaking the very world, on which the great contest was won.

Deep in the ground beneath our feet, a rocky shell comprising an outer Crust and an inner Mantle forms a hard and rigid outer layer, closing off and containing the solid inner core of our planet.  Between these hard inner and outer layers exists a liquid core of molten material, comprising approximately two-thirds the cross-section of planet Earth.

The air around us is a liquid, exerting a ‘weight’ or barometric pressure at sea level, of approximately 14.696 pounds per square inch. Scientists estimate the pressures within this outer core to be approximately 3.3 million times atmospheric pressure, generating temperatures of 10,800° Fahrenheit, a temperature comparable to the surface of the sun.

That rocky shell closing us off from all that is actually quite elastic, broken into seven or eight major pieces, (depending on how you define them), and several minor bits called Tectonic Plates.

Over millions of years, these plates move apart along constructive boundaries, where oceanic plates form mid-oceanic ridges. Roughly equal and opposite to these are the Subduction zones, where one plate moves under another and down into the mantle.

This movement in what we’d like to regard as Terra Firma, results in deep ocean trenches (the Aleutian Trench reaches depths of 25,194 feet) and mountain ranges such as the Andes along the border with Argentina and Chile, where towering peaks reach a height of over 22,500 feet or more. 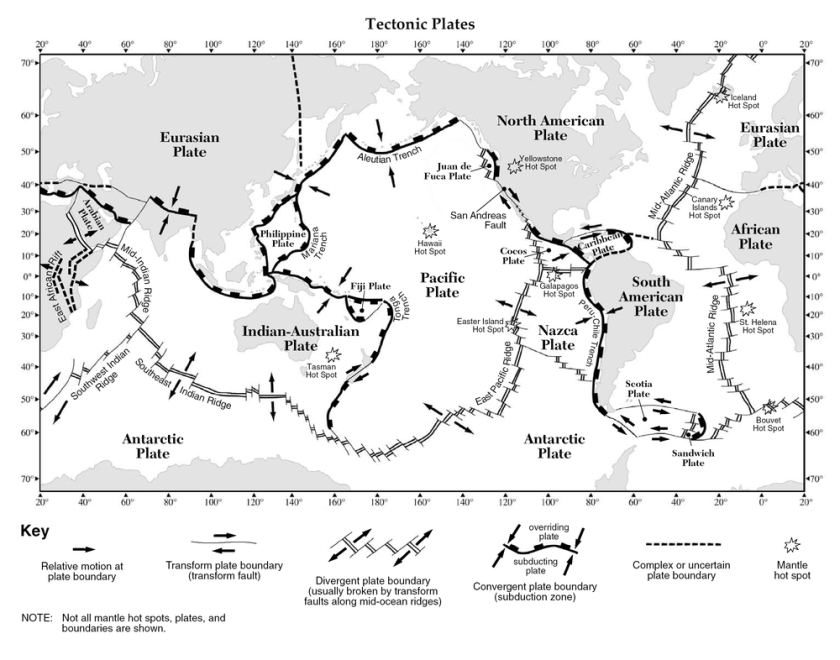 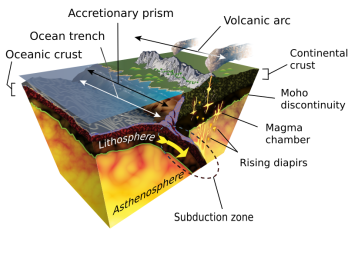 Roughly 90% of all earthquakes and 75% of potentially active volcanoes in the world, occur along a horseshoe shaped Ring of Fire, encircling the Pacific Ocean.

One hundred and thirty five years ago today, a mere blink of an eye in geologic time, the most destructive volcano in recorded history erupted along the western reaches of this ring of fire on the Indonesian island of Krakatau (Krakatoa).

Early seismic activity began several years before the 1883 eruption, with earthquakes felt as far away, as Australia. Steam began to vent in May of that year, from the northernmost of three cones comprising the island group of Krakatau. Explosions could be heard from as much as 99 miles away by the end of May, propelling thick clouds of ash to an estimated altitude of 20,000 feet, before activity died down in early June.

Eruptions at Krakatoa resumed around the 16th of June, and continued until the 24th. The violence of these ongoing eruptions caused tides in the area to be unusually high, while ships at anchor, had to be moored with heavy chains.

This thing was only yawning and stretching.  Just getting out of bed. 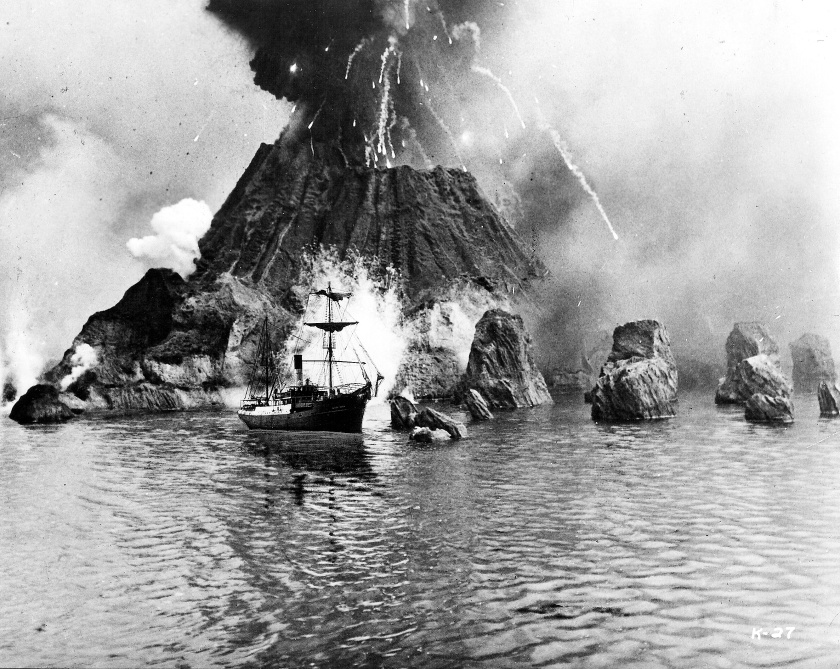 Eruptions intensified on August 25, while ships twelve miles away reported softball-sized pieces of hot pumice, raining down on their decks.  A small tsunami hit the shores of Java and Sumatra, twenty-five miles away.  Krakatoa entered its paroxysmal stage on August 26 followed by four prodigious explosions, the following day.

The first explosion at 5:30am triggered a Tsunami of 98-feet or more, wiping out much of the island of Sumatra.  The second explosion at 6:44 triggered a second tsunami.  The third and largest explosion at 10:02 am was so violent it could be heard 1,930 miles away in Perth, in Western Australia.  On the Indian Ocean islands near Mauritius, 3,000 miles distant, the sound was mistaken for cannon fire, from a nearby ship.

The colossal fourth and final explosion generated pressure waves racing outward from Krakatoa, at 675 mph. The sound was so loud as to be heard clearly from the United States to Great Britain, the pressure wave rounding the globe and returning to the volcano no fewer than 3½ times.

Barometric pressure gauges spiked 2½ inches of mercury, equivalent to 180 decibels, of sound pressure.  As a point of reference, short-term hearing damage can occur at 120, and the threshold for human pain, is 134.

Untold millions of tons of super heated ash rose fifty miles and more, into the air. Ships as far away as South Africa, were rocked by the series of tsunamis.

The combined effects of the explosions, tsunamis and the Pyroclastic Flow, the fast-moving air current of superheated gases and volcanic material capable of reaching ground speeds of 430 miles per hour, resulted in an official death toll of 36,417.  Some estimates put the number as high as 120,000.

When it was over, all but the bottom third of the island was gone, swallowed whole by the empty magma chamber, below. Fifty-six miles distant, the westernmost provinces of Java have been reclaimed by jungle and remain depopulated, to this day. 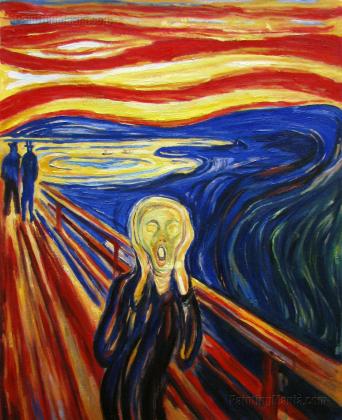 Following the 1883 eruption, temperatures in the northern hemisphere fell by an average of 2.2°, Fahrenheit. Weather patterns were disrupted for years on end.

Particulate matter in the atmosphere refracted light worldwide resulting in glowing white clouds at night, and some of the most spectacular red sunsets, ever seen. Edvard Munch’s painting “The Scream“, is thought to be an accurate depiction of the colors. Fire trucks were called out in Poughkeepsie and New York, for what many believed to be a raging fire.

In 1927, a new island emerged from the caldera left by the 1883 cataclysm.  Anak Krakatau (“Child of Krakatoa”) is currently the site of eruptive activity, one of 1,500 potentially active volcanoes, according to the United States Geological Survey (USGS.gov).  Approximately five hundred of these were active, in historic times.

The ability to predict such an eruption, remains elusive.  Iceberg tremors, gas emissions, thermal monitoring and relative rates of ground deformation remain areas, for continued study. When Mount St. Helens erupted in May 1980, USGS scientists were able to provide about three weeks warning.