History collides with legend when you peer a thousand years into the past, but one thing is certain. Shakespeare’s Macbeth bears little resemblance to the man, for whom the story is named. 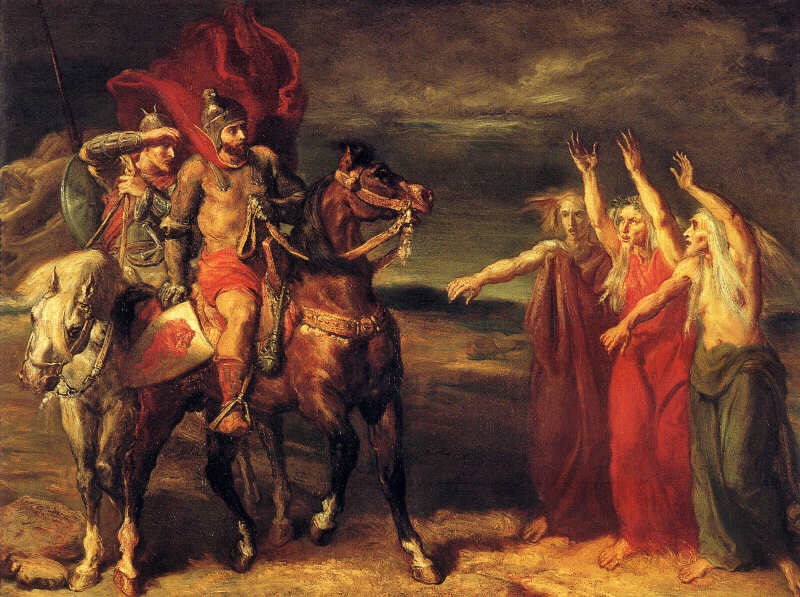 Them that strut and fret their hours upon the stage are a superstitious lot full of sound and fury, signifying nothing. (Apologies to the Bard for that bit of word butchery).

In the world of theater it is high praise to present the performer with flowers, in token of appreciation for a fine performance. Be warned though, never give a performer flowers, before the play. That would bring bad luck. Never bringing a mirror on stage may be more practical than superstitious as you can never account for the reflection of set lighting, but then there’s the tradition, of the graveyard bouquet. Yeah. When a production closes, it is considered good luck to steal flowers from a graveyard and present them, to the director. Go figure. And whatever you do you are never to utter the name, Macbeth. Trust me. It’s “ the Scottish play”.

Act I. General Macbeth, Thane of Glamis, chances upon three witches who prophecy that he, Macbeth, is to be Thane of Cawdor and even more, King of Scotland.

Spurred on by his wife the ruthless and ambitious Lady Macbeth, he slips into the bedchamber of the good King Duncan and plunges the dagger, then frames the King’s bodyguards, for his murder. Now himself King in fulfillment of the witches’ prophecy, Macbeth and his Lady descend into a world of guilt and madness, duplicity and murder in the fruitless attempt to cover for his crime.

So sayeth William Shakespeare but what of the real Mac Bethad mac Findlaích?

History collides with legend when you peer a thousand years into the past, but some things are certain. 11th century Scotland was not the nation we know today, but a collection of warring kingdoms. Máel Coluim mac Cináeda (Malcolm II) came to power after defeating and killing his cousin King Kenneth III in 1005 at the battle of Monzievaird, near Crieff.

Malcolm was a fearsome ruler who immediately set about eliminating (read…killing), potential claimants to the throne. Information is scant but Malcolm appears to have fathered, three daughters. All three married well giving rise to yet more rivals but it was Duncan, Malcolm‘s grandson who would rise to power after his grandfather was killed in battle, in 1034.

Macbeth’s cousin murdered his father Findlaích and took for himself the title of Mormaer (Earl), when the boy was barely in his teens. Macbeth had his revenge in 1045 when found his cousin in a hall, with fifty of his warriors. Macbeth burnt the place to the ground, took the title for himself and, astonishingly, married his cousin’s widow, Gruoch.

The first Scottish Queen whose name we actually know, the real Lady Macbeth turns out to be hardly the avaricious harpy of the Bard’s portrayal but a saintly woman, best known for funding the production of illustrated manuscripts by the monks of a tiny friary, in Loch Leven.

Now himself Mormaer of Moray Macbeth proved a powerful fighter against the Vikings coming down from the north and a key ally, of King Duncan.

Duncan I ruled for five years and was indeed killed by Macbeth, but there the similarity ends. Duncan’s peaceful accession to the crown was the exception to the rule in 11th century Scotland. His death in battle was not, the killing blow delivered on August 14, 1040 at the battle of Pitgaveny, at the hands of Macbeth’s forces if not Macbeth, himself.

Victorious, Macbeth had a strong claim to the crown. According to modern descendants of clan Duncan stronger than Duncan, himself. The real lady Macbeth was the granddaughter, of Kenneth III. Macbeth was a direct relation to Malcolm himself, through his mother’s line. So it is the powerful Mormaer of Moray himself became King, ruling over Scotland, for the next seventeen years.

Scottish coronations were different at this time, than you might think. There was no physical crown, that wouldn’t come about, for another 200 years. Macbeth would have sat upon the 236-pound “Stone of Destiny” as the list of Scottish Kings, was read aloud. He was then given a sword with which to defend his kingdom and proclaimed King, by the assembled nobles.

While Shakespeare’s Macbeth was steeped in blood and treachery, the real King Macbeth seems to have been, well liked. There was blood, yes, Macbeth lived in a time of savagery when scores were settled with edged weapons but, much of his reign, was enjoyed in peace. Like the Bard’s Macbeth whose past would come back to haunt him, Duncan I’s father, Crinán, abbot of Dunkeld challenged the peace, in 1045. This was a brief but bloody struggle much smaller than the epoch-changing battle of Hastings, ten years after the death of Macbeth. When it was over Crinán lay dead along with 180 of his followers.

Macbeth was the first of the Scottish Kings to take a pilgrimage to Rome, to meet with Pope Leo IX. This demonstrates not only a sense of security against usurpers at home but the wealth, to scatter “money like seed to the poor”. For the first time a United Scotland, stood before the world.

Macbeth was the first to bring Normans into his service in 1052 indicating a new openness, to international trade.

Trouble came from the south in the form of Siward, the powerful Earl of Northumbria, a Danish chieftain who rose to power under the Viking King of England , Cnut the Great. The year was 1054, the battle taking place north of the Firth of Forth near a place called Dunsinane. When it was over 3,000 of Macbeth’s forces were dead. Siward lost 1,500 and his own son, Osbjorn.

His Norman mercenaries now eliminated Macbeth was forced to give up, much of his southern Kingdom. Macbeth retained his kingship for now his reign came to an end a year later near Lumphanan, in Aberdeenshire. The son of the man Macbeth had killed some seventeen years earlier came for his father’s killer on August 15, 1057.

Macbeth, King of Alba, was dead. Malcolm III Canmore would rule through the Norman Conquests until he himself was ambushed and killed, in 1093.