Burgoyne had no choice but to capitulate, surrendering his entire force on the 17th of October, a devastating defeat for the British cause which finally brought France in on the side of the Americans.  The American Army had gone toe to toe with the most powerful military on the planet, and it was still standing.

Three hours from the upstate New York village of Sleepy Hollow, in the woods of Schuylerville, there stands the statue of a leg.  A boot, actually, a man’s riding boot, along with an epaulet and a cannon barrel pointing down, denoting the death of a General.  It seems the loneliest place on earth out there in the woods, with nothing but a footpath worn into the forest floor to lead you there.

It was October 7, 1777, the last day of the Battle of Saratoga.  General Horatio Gates was in overall command of American forces, a position which greatly exceeded his capabilities.  Gates was cautious to the point of timidity, generally believing his men to be better off behind prepared fortifications, than taking the offensive.

Gates’ subordinate, General Benedict Arnold, could not have been more different.  Arnold was imaginative and daring, a risk taker possessed of physical courage bordering on recklessness.  The pair had been personal friends at one time.  By this time the two were often at odds.

British General John “Gentleman Johnny” Burgoyne led a joint land and water invasion of 7,000 British and Hessian troops south along the New York side of Lake Champlain, down the Hudson River valley.

It had started out well for him with the bloodless capture of Fort Ticonderoga, but Burgoyne ran into a buzz saw outside of Bennington, Vermont, losing almost 1,000 men to General John Stark’s New Hampshire rebels and a militia unit headed by Ethan Allen, calling itself the “Green Mountain Boys”.

Burgoyne intended to continue south to Albany, linking up with forces under Sir William Howe and cutting the colonies in half.  The 10,000 or so Colonial troops situated on the high ground near Saratoga, New York, were all that stood in his way.

American forces selected a site called Bemis Heights, about 10 miles south of Saratoga, spending a week constructing defensive works with the help of Polish engineer Thaddeus Kosciusko.  It was a formidable position:  mutually supporting cannon on overlapping ridges, with interlocking fields of fire.  Burgoyne knew he had no choice but to stop and give battle at the American position, or be chopped to pieces trying to bypass it.

The Battle of Freeman’s Farm, the first of two battles for Saratoga, occurred on September 19.  Technically a Patriot defeat in that the British held the ground at the end of the day, it was a costly victory.  English casualties were almost two to one.  Worse, the British column was out at the end of a long and tenuous supply line, while fresh men and supplies continued to move into the American position.

Freeman’s Farm could have been a lot worse for the Patriot cause, but for Benedict Arnold’s anticipating British moves, and taking steps to block them in advance.

The personal animosity between Gates and Arnold boiled over in the days that followed.  Gates’ report to Congress made no mention of Arnold’s contributions at Freeman’s Farm, though field commanders and the men involved with the day’s fighting unanimously crediting Arnold for the day’s successes.  A shouting match between Gates and Arnold resulted in the latter being relieved of command, and replaced by General Benjamin Lincoln. 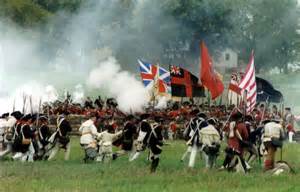 The second and decisive battle for Saratoga, the Battle of Bemis Heights, occurred on October 7, 1777.

Lieutenant Colonel Heinrich Christoph Breymann’s Hessian grenadier regiment formed the right anchor of Burgoyne’s line, manning a wooden fortification some 250′ wide by 7′ high.  It was a strategically important position, with nothing between itself and the regiment’s main camp to the rear.

Even though relieved of command, Benedict Arnold was on the field, directing the battle on the American right.  As the Hessian position began to collapse, General Arnold left his troops facing Balcarre’s Redoubt on the right, riding between the fire of both armies and joining the final attack on the rear of the German post.  Arnold was shot in the left leg during the final moments of the action, shattering the same leg that had barely healed after the same injury at the Battle of Quebec City, almost two years earlier.

It would have been better in the chest, he said, than to have received such a wound in that leg.

Burgoyne had no choice but to capitulate, surrendering his entire force on the 17th of October.  It was a devastating defeat for the British cause, which finally brought France in on the American side.  A colonial Army had gone toe to toe with the most powerful military on the planet, and was still standing.

A British officer described the battle:  “The courage and obstinacy with which the Americans fought were the astonishment of everyone, and we now became fully convinced that they are not that contemptible enemy we had hitherto imagined them, incapable of standing a regular engagement, and that they would only fight behind strong and powerful works.”

Three years later, Benedict Arnold betrayed the American fortifications at West Point to John André.  The name of one of our top Revolution-era warriors, a General whom one of his own soldiers later described as “the very genius of war,” became that of Traitor.

One of Arnold’s contemporaries commented that, if the Patriots ever caught him they would hang him, and then they would bury his leg with full military honors. 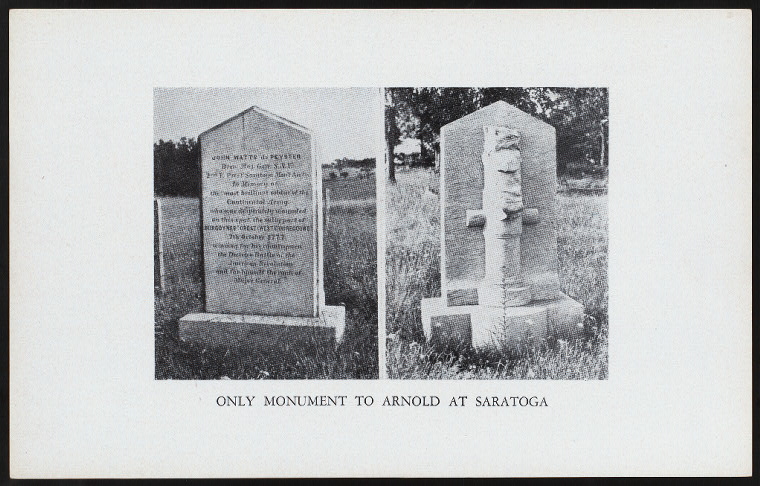 So it is that there is a statue of a leg in the forest south of Saratoga, dedicated to a Hero of the Revolution who has no name.  On the back of the monument are inscribed these words:

the most brilliant soldier of the

who was desperately wounded

on this spot the sally port of

winning for his countrymen

the decisive battle of the

and for himself the rank of 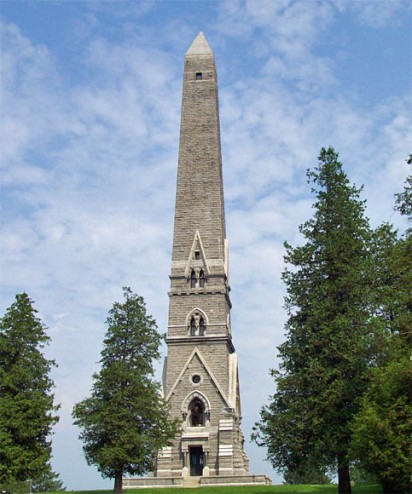 Today, the Saratoga battlefield and the site of Burgoyne’s surrender are preserved as the Saratoga National Historical Park.  On the grounds of the park stands an obelisk, containing four niches.

Three of them hold statues of American heroes of the Battle.  There is one for General Horatio Gates, one for General Philip John Schuyler and another for Colonel Daniel Morgan.

The fourth niche, where Benedict Arnold’s statue would have gone, remains empty, to this day.