Legends grew up around her, over the years. She had fallen in love with a sailor. She wanted him to find her when he returned. He’d been lost at sea. The bittersweet truth is less dramatic. 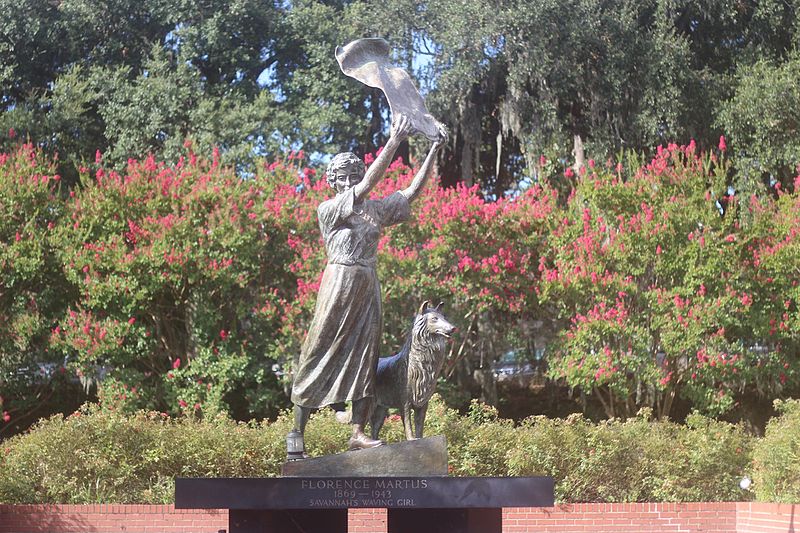 Following the War of 1812, President James Madison ordered a series of coastal fortifications to be built, to protect the young nation from foreign invasion. Fort Pulaski, located on Cockspur Island between Savannah and Tybee Island, Georgia, is one of them.

Florence Margaret Martus was born there in 1868, where her father was an ordnance sergeant. She spent her childhood on the south channel of the Savannah River, moving in with her brother, keeper of the Cockspur Island Lighthouse, when she was 17.

Sometime around 1887 while still a young girl, Florence began waving at ships passing in the river. She’d use a lantern by night and a white handkerchief by day.

It started with friends, working the river.  Harbor masters, bar pilots and tugboat captains.  Before long, “the waving girl” and her collie were familiar figures, greeting every ship that came or left the port of Savannah.  Sailors would look for her and salute in return. Vessels would blow their horns, but few ever met her in person.

Legends grew up around her, over the years. She had fallen in love with a sailor. She wanted him to find her when he returned. He’d been lost at sea.

The bittersweet truth is less dramatic. She later said, “That’s a nice story. But what got me started – I was young and it was sort of lonely on the island for a girl. At first I would run out to wave at my friends passing, and I was so tickled when they blew the whistle back at me“.

And so, Miss Martus would take out her handkerchief by day or light her lantern by night, and she would greet every vessel that came or went from the Port of Savannah.  Every one of them.  Some 50,000, over 44 years.

In 1893, Martus and her brother braved hurricane conditions, rowing out to save several men from a sinking boat.

She waved an American flag at the troop ship St. Mihiel after WWI, on its return to Savannah carrying the United States Army of the Rhine.

“The Waving Girl” had taken it upon herself to greet every single ship entering and leaving the Port of Savannah, from young womanhood until old age.

She stopped only when she was forced to do so when her brother, then 70, had to leave his lighthouse job and the home which went with it.

All that time she kept a careful record of every ship:  name, date, where it was from and type of vessel.  It must have broken her heart to move, because she burned the entire record.  44-years’ worth. WWII-era reporter Ernie Pyle lamented “The daily record for forty-four years, one of the most legendary figures of the Seven Seas, kept in her own hand, gone up in smoke in two minutes”.

The artist Felix de Weldon, who sculpted the United States Marine Corps Memorial outside Arlington National Cemetery, erected a statue of the Waving Girl and her collie. You can see it in Morrell Park, on the west bank of the Savannah River.

Florence Martus passed away on February 8, 1943, following a brief bout with bronchial pneumonia.  One of the Liberty ships built in Savannah during World War II, was named in her honor. The SS Florence Martus was officially christened seven months later, September 27, 1943. 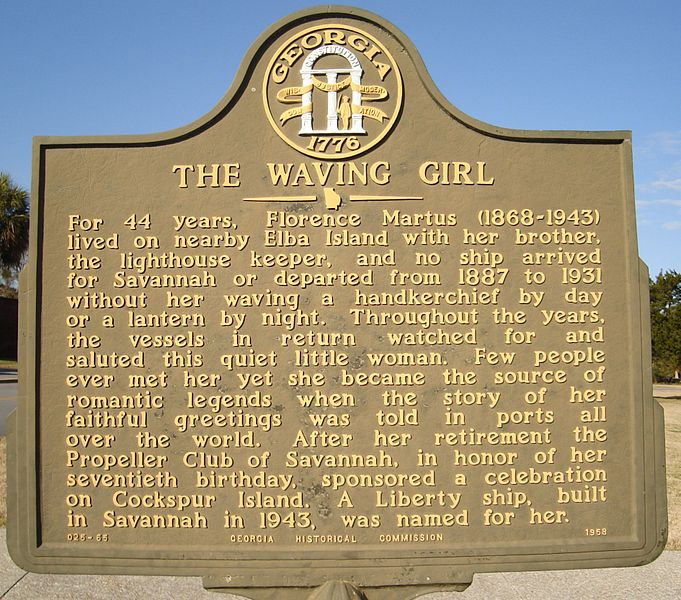