The Nazis called this new and terrifying weapon, “Vergeltungswaffe”, or “Vengeance weapon”. Finnish soldiers called the thing a flying torpedo. At over 27-feet long it was a flying bomb with a payload of nearly a ton of high explosive. Allies called this Nazi superweapon the “Buzz Bomb” or simply, “Doodlebug”. 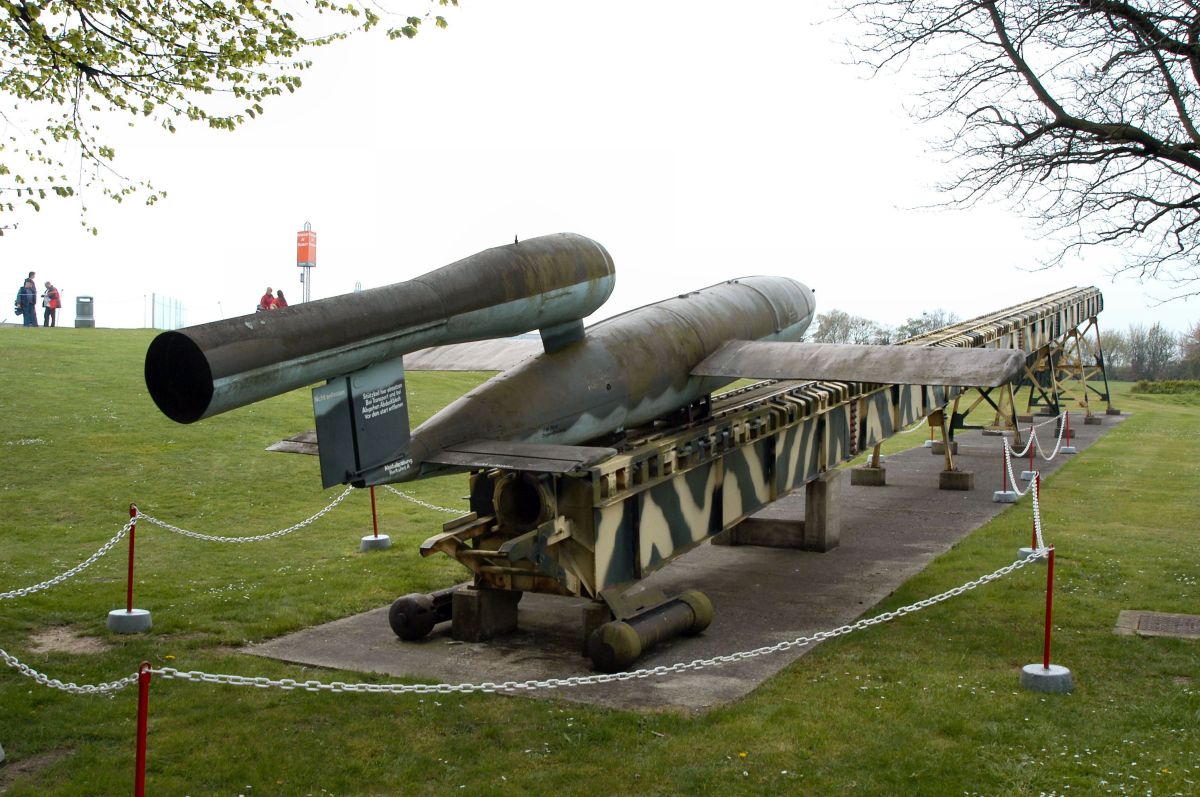 In the early morning hours of June 13, 1944, a member of the Royal Observer Corps (ROC) spotted a bright yellow glow in the early morning darkness. The sentry was on the lookout for such a sight and immediately informed his superiors. The code word, “diver”.

The yellow glow went out within moments and plummeted to the earth, landing in the village of Swanscombe, some 20 miles east of the Tower of London. Other such devices were soon falling from the sky with terrible exclusive force. Cuckfield, West Sussex, London and Sevenoaks, in Kent. This time only six people died in a place called Bethnal Green. There would be more.

The Nazis called this new and terrifying weapon, “Vergeltungswaffe”, or “Vengeance weapon”. Finnish soldiers called the thing a flying torpedo. At over 27-feet long it was a flying bomb with a payload of nearly a ton of high explosive. Allies called this Nazi superweapon the “Buzz Bomb” or simply, “Doodlebug”.

Nazi Germany aimed as many as 10,492 of these Doodlebug rockets against England. Some 6,000 were killed in London alone, with another 18,000 serious injuries. The subsonic Doodlebug was an effective terror weapon but, bad as it was to be the target of one of these things, the “low and slow” trajectory and the weapon’s short range lacked the strategic punch Nazi Germany needed to win the war.

The next generation V2 missile was a different story.  The V2 ushered in the era of the ballistic missile and Nazi Germany was the first off the starting line.

The Peenemünde Aggregat A4 V2 was an early predecessor of the Cruise Missile, delivering a 2,148 pound payload at 5 times the speed of sound over a 236-mile range. While you could hear the V1 coming and seek shelter, victims of the V2 didn’t know they were under attack, until the weapon had exploded.

When Wernher von Braun showed Adolf Hitler the launch of the V2 on color film, Hitler jumped from his seat and shook Braun’s hand with excitement. “This is the decisive weapon of the war. Humanity will never be able to endure it,” Hitler said, “If I had this weapon in 1939 we would not be at war now.”

Allies were anxious to get their hands on this new secret weapon. In early 1944 they had their chance when a V2 crashed into a muddy bank of the Bug River in Nazi-occupied Poland, without exploding. The Polish underground was waiting for such an opportunity and quickly descended on the rocket, disguising it with brush. Desperate to retrieve the weapon, Germans conducted a week long aerial and ground search for the V2, but failed find it under all that camouflage.

The search came to an end after what must have seemed an eternity, when partisans returned to the site. This time they brought four Polish scientists who carefully disassembled the weapon, packing the pieces in barrels. The parts were then shipped to a barn in Holowczyce, just a few miles away.

The allied effort to retrieve the stolen missile, code named “Most III”, got underway on this day in 1944, when Royal New Zealand Air Force 1st Lt Stanley George Culliford landed his Dakota C47 in the early morning darkness at a secret air strip near Tarnow.

The V2 chassis and several technical experts were loaded on board, but it was all too much.  The overloaded C47 couldn’t move on the wet, muddy field – the port wheel stuck fast in the mud.  Everything had to be offloaded, Polish partisans working desperately to free the aircraft as dawn approached. They stuffed the wheel track with straw, and then laid boards in the trench.  Nothing worked.

Co-pilot Kazimierz “Paddy” Szrajer thought the parking brake must be stuck, so the hydraulic leads supplying the brake, were cut. That didn’t work, either. In the end, partisans were frantically digging trenches under the aircraft’s main wheel. Two attempts failed to get the aircraft off the ground, and Culliford was thinking about blowing up the plane and burning all the evidence.  There could only be one more attempt.

The aircraft lumbered off the ground on the third try.  The last of the partisans scattered into the night, even as the headlights of Nazi vehicles could be seen, approaching in the early morning darkness.

There would be 5 hours of unarmed, unescorted flight through Nazi-controlled air space and an emergency landing with no brakes, before those V2 rocket components finally made it to England.

Today, few remember the names of these heroes, struggling in the dark to defeat the forces of Tyranny.  We are left only to imagine a world in which Nazis remained in sole possession of the game changing super weapons, of WWII