Is there anyone alive that day who doesn’t remember Neil Armstrong’s words, as he stepped onto the lunar surface “There’s one small step for [a] man, and one great leap for mankind”. Yet something else happened up there only hours earlier, and most of us never heard about it.

On May 25, 1961, American President John F. Kennedy delivered a message before an audience at Rice University in Houston, articulating a goal of “landing a man on the moon and returning him safely to the earth” by the end of the decade.

The accomplishments of the Apollo series seem almost foreordained to us, the massive complexities of the undertaking, all but forgotten.

In the modern era, the most powerful supercomputers on earth put space telescopes into orbit, albeit sometimes with “vision” needing to be corrected with “glasses”, as in the case of the Hubbell space telescope.

In 1969, these guys were sending human beings 240,000 miles into space to land on the moon and come back again, on less computing “horsepower” than your cellphone.

Any one of countless calculations could have misfired, slinging three astronauts into the black void of space, there to spend eternity, in a flying tomb.

The Apollo spacecraft consisted of three components: a Command Module (CM) with a cabin for the three astronauts, a Service Module (SM) supporting the CM with propulsion, electrical power, oxygen and water; and a Lunar Module (LM) for the actual landing.

The vehicle was launched into space by a Saturn V rocket, designed to break apart as each of a series of rocket stages were exhausted, and separated from the main craft.

The Command/Service Module passed behind the moon at 12:21 Eastern Standard Time on July 19, firing its service propulsion engine and inserting the craft into lunar orbit.

Aldrin and Armstrong next moved into the LM, the only component to actually land on the lunar surface, with Collins remaining to orbit the moon in the CM.

The pair landed on a flat plain called the “Sea of Tranquility” on this day in 1969, three-foot probes touching the lunar surface at 4:18pm eastern standard time followed within seconds, by the LM itself. There were fifteen seconds of fuel left, in the “gas tank”.

Two men had landed in the 1/6th gravity of the moon, in a vehicle so delicate that the thing couldn’t support its own weight, back on earth. Half the world heard the words “Tranquility base, the eagle has landed”.

Back in Houston, controllers joked about turning blue. Now at last, they could breathe.

The schedule called for a break. A few hours to rest before that now-famous walk, on the surface of the moon.

Is there anyone alive that day who doesn’t remember Neil Armstrong’s words, as he stepped onto the lunar surface “There’s one small step for [a] man, and one great leap for mankind“. Yet something else happened up there only hours earlier, and most of us never heard about it.

Buzz Aldrin was a Christian. An elder in the Presbyterian church. He wanted to mark this momentous occasion and so he discussed it, with his pastor. The two agreed. He would bring with him the bread and the wine of Christian sacrament. He would receive holy communion, on the surface of the moon.

Conscious that this was a moment for all mankind and not only Christians, Aldrin invited listeners to pause, to reflect on the significance of the moment and to give thanks, in their own way. Then he opened the bread and the wine. Let him tell this part of the story, himself:

“In the radio blackout, I opened the little plastic packages which contained the bread and the wine. I poured the wine into the chalice our church had given me. In the one-sixth gravity of the moon, the wine slowly curled and gracefully came up the side of the cup. Then I read the Scripture, “I am the vine, you are the branches. Whosoever abides in me will bring forth much fruit. Apart from me you can do nothing.” I had intended to read my communion passage back to earth, but at the last minute [they] had requested that I not do this. NASA was already embroiled in a legal battle with Madelyn Murray O’Hare [sic], the celebrated opponent of religion, over the Apollo 8 crew reading from Genesis while orbiting the moon at Christmas. I agreed reluctantly. I ate the tiny Host and swallowed the wine. I gave thanks for the intelligence and spirit that had brought two young pilots to the Sea of Tranquility. It was interesting for me to think: the very first liquid ever poured on the moon, and the very first food eaten there, were the communion elements. And of course, it’s interesting to think that some of the first words spoken on the moon were the words of Jesus Christ, who made the Earth and the moon — and Who, in the immortal words of Dante, is Himself the “Love that moves the Sun and other stars”.

At 10:39 Eastern Daylight Time, Neil Armstrong opened the door. And stepped onto the surface of the moon.

Fifteen years before Angus “Mac” MacGyver hit your television screen, mission control teams, spacecraft manufacturers and the crew itself worked around the clock to “MacGyver” life support, navigational and propulsion systems. For four days and nights, the three-man crew lived aboard the cramped, freezing Aquarius, a landing module intended to support a crew of 2 for only a day and one-half.

The seventh manned mission in the Apollo space program was scheduled to be the third moon landing, launching at 13:13 Central Standard Time from the Kennedy Space Center in Florida.

Jim Lovell was the most seasoned astronaut in the world at that time, a veteran of two Gemini missions and Apollo 8.  By launch day, April 11, 1970, Lovell had racked up 572 space flight hours. For Fred Haise, backup crew member on Apollo 8 and 11, this would be his first spaceflight.

Two separate vessels were joined to form the Apollo spacecraft, separated by an airtight hatch. The crew lived in a Command/Service module called “Odyssey”.  The Landing Module (LM) dubbed “Aquarius”, would perform the actual moon landing.

56 hours into the mission and 5½ hours from the Moon’s sphere of gravitational influence, Apollo crew members had just finished a live TV broadcast.  Haise was powering the LM down while Lovell stowed the TV camera.  Mission Control asked Swigert to activate stirring fans in the Service Module’s hydrogen and oxygen tank. Two minutes later, the astronauts heard a “loud bang”.

Manufacturing and testing of the vessel had both missed an exposed wire in an oxygen tank.  Swigert had flipped the switch for a routine procedure, causing a spark to set the oxygen tank on fire. Alarm lights lit up all over Odyssey and in Mission Control.  The entire spacecraft shuddered as one oxygen tank tore itself apart and damaged another.  Power began to fluctuate.  Attitude control thrusters fired, and communications temporarily went dark.

The crew could not have known at the time.  The entire Sector 4 panel had just blown off. 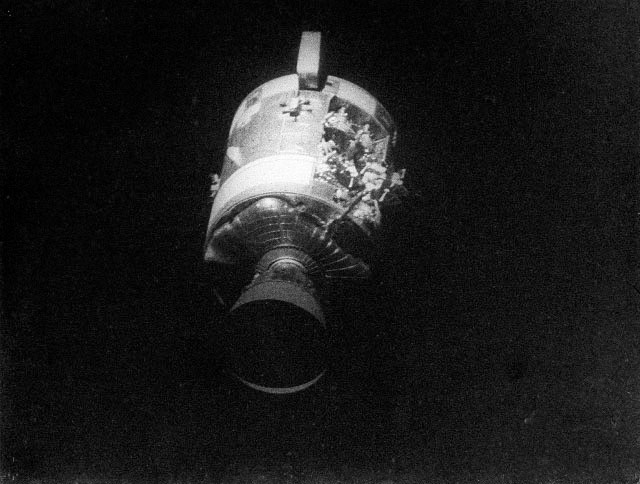 The movie takes creative license with Commander James Lovell saying “Houston, we have a problem”.  On board the real Apollo 13 it was Jack Swigert who spoke:  “Houston, we’ve had a problem”.

205,000 miles into deep space with life support systems shutting down, the Lunar Module became the only means of survival.  There was no telling if the explosion had damaged Odyssey’s heat shields.  It didn’t matter. For now, the challenge was to remain alive.  Haise and Lovell frantically worked to boot up Aquarius, while Swigert shut down systems aboard Odyssey.   Power needed to be preserved for splashdown.

The situation had been suggested during an earlier training simulation, but considered unlikely. As it happened, the accident would have been fatal without access to the Lunar Module. 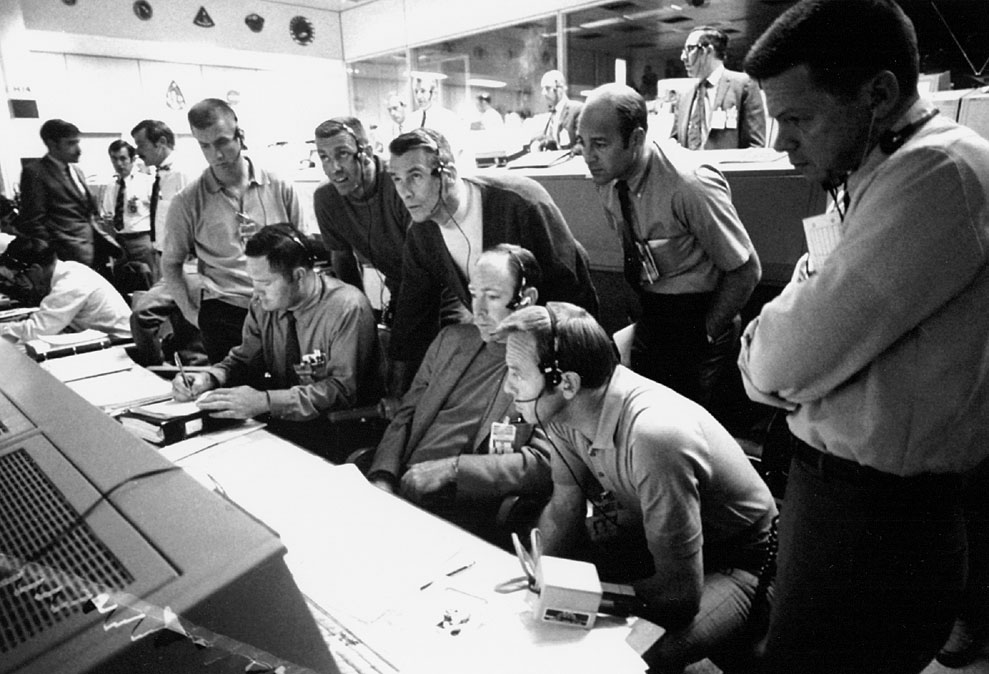 Fifteen years before Angus “Mac” MacGyver hit your television screen, mission control teams, spacecraft manufacturers and the crew itself worked around the clock to “MacGyver” life support, navigational and propulsion systems. For four days and nights, the three-man crew lived aboard the cramped, freezing Aquarius, a landing module intended to support a crew of 2 for only a day and one-half.

With heat plummeting to near freezing food inedible and an acute shortage of water, this tiny, claustrophobic “lifeboat” would have to do what it was never intended to do.

Atmospheric re-entry alone presented near-insurmountable challenges. The earth’s atmosphere is a dense fluid medium. If you reenter at too steep an angle, you may as well be jumping off a high bridge. As it is, the human frame can withstand deceleration forces no higher than 12 Gs, equivalent to 12 individuals identical to yourself, piled on top of you.  Even at that, you’re only going to survive a few minutes, at best.

We all know what it is to skip a stone off the surface of a pond.  If you hit the atmosphere at too shallow an angle, the result is identical to that stone. There is no coming down a second time. You get one bounce and then there is nothing but the black void of space.

Most of the country and much of the world held its breath for seventy-eight hours, waiting for the latest update from newspaper and television news.  With communications impossible, TV commentators used models and illustrations, to describe the unfolding drama.  On board Odyssey, power was so low that voice-only transmissions became difficult. Visual communications with Mission Control were as impossible as the idea that the stranded astronauts could get out and walk home.

As Odyssey neared earth, engineers and crew jury-rigged a means of jettisoning the spent Service Module, to create enough separation for safe re-entry.

One last problem to be solved, was the crew’s final transfer from Lunar Module back to Command Module, prior to re-entry.  With the “reaction control system” dead, University of Toronto engineers had only slide rules and six hours in which to devise a way to “blow” the LM, by pressurizing the tunnel connecting it with the CM.  Too much pressure might damage the hatch and seal.  Too little wouldn’t provide enough separation between the two bodies.  Either failure would result in one of those “shooting stars” you see at night, as the searing heat of re-entry incinerated the Command Module and everything in it.

By this time, the Command Module had been in “cold soak” for days.  No one knew for certain, if the thing would come back to life.

Crashing into the atmosphere at over 24,000mph, the capsule had 14 minutes in which to come to a full stop, splashing down in the waters of the Pacific Ocean. External temperatures on the Command Module reached 2,691° Fahrenheit, as the kinetic energy of re-entry converted to heat.

The Apollo 13 mission ended safely with splashdown southeast of American Samoa on April 17, 1970, at 18:07:41 local time.  Exhausted and hungry, the entire crew had lost weight.  Haise had developed a kidney infection.  Total duration was 142 hours, 54 minutes and 41 seconds.

“In 1992, Lovell…decided to write a book-length account of the incident titled Lost Moon. He and co-writer Jeff Kluger finished one chapter and a proposal, which was in turn sent to publishers and production houses. A bidding war was sparked, and Ron Howard’s Imagine Entertainment wound up winning film rights. The movie actually began shooting in 1994 before Lovell’s book was even released. (It was later re-titled Apollo 13.)” Hat Tip MentalFloss.com