A liar, a chameleon, a man of 1,000 aliases, Fritz Duquesne once feigned paralysis for seven months in prison, just so he could fool his jailers long enough to escape.  Frederick Burnham, a real-life Indiana Jones and the inspiration for the Boy Scouts of America, described Duquesne as “the last man I should choose to meet in a dark room for a finish fight armed only with knives.“ 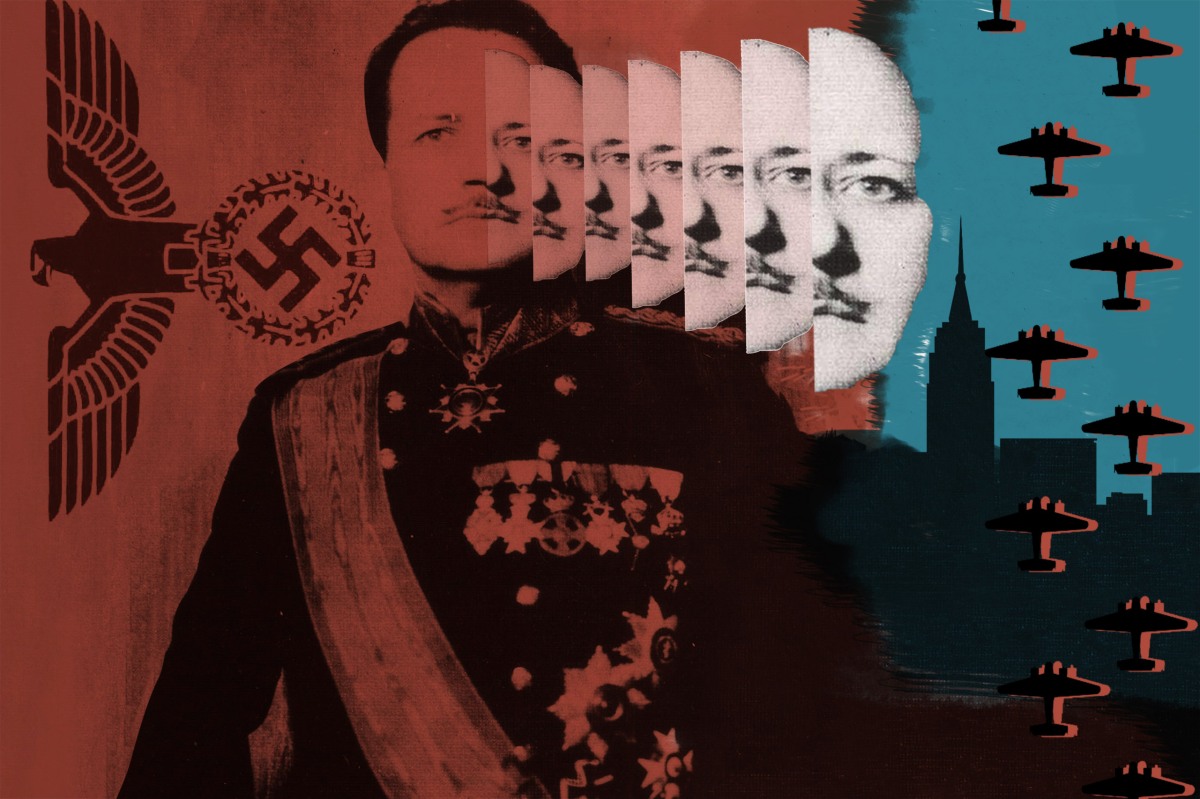 In 1910, the United States Congress defeated by one vote, a measure to introduce African hippopotami into the American food supply.  Supporters of the measure envisioned great herds of free-range hippos, filling swamps, rivers and bayous from the Atchafalaya basin to the Okefenokee Swamp, to the Florida Everglades.

As the “American Hippo” bill wended its way through Congress, the measure picked up steam with the enthusiastic support of two mortal enemies who’d spent years in the African bush, trying to kill each other.

Major Frederick Russell Burnham was a freelance scout and American adventurer. The “King of Scouts’, Burnham was a “man totally without fear,” a real-life Indiana Jones and the inspiration for the Boy Scouts of America.  This is the guy who should have been in the Dos Equis beer commercials.  One contemporary described the man as the “most complete human being who ever lived“.

Burnham’s fellow hippo salesman and would-be murderer was Frederick “Fritz” Joubert Duquesne.  A Boer of French Huguenot ancestry, Duquesne was a smooth talking guerrilla fighter, an adrenaline junkie and self-styled “Black Panther”, who once described himself as every bit the wild African animal, as any creature of the veld.  A liar, a chameleon, a man of 1,000 aliases, Duquesne once feigned paralysis for seven months in prison, just so he could fool his jailers long enough to escape.  Burnham himself described him as “the last man I should choose to meet in a dark room for a finish fight armed only with knives.“

During the second Anglo-Boer war of 1899 – 1902,  several large shipments of gold totaling  1.5 million pounds were removed from the central bank in Pretoria, and sent to the Netherlands for the use of exiled president Paul Kruger and other Boer exiles fleeing the Transvaal. 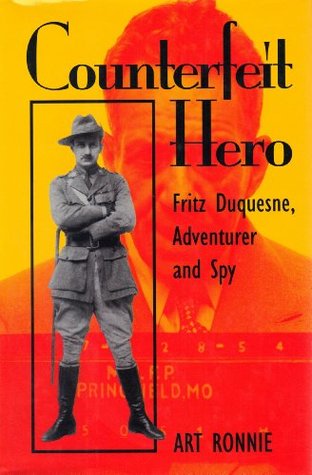 Fritz Duquesne  was in charge of moving one of those shipments across the bushveld of Portuguese East Africa, when some kind of argument broke out.  When it was over, only two wounded Boers were left alive, along with Duquesne himself and a few tottys (native porters).  Duquesne ordered the tottys to hide the gold, burn the wagons and kill the survivors.  He then rode off on an ox, having given the rest to the porters.

Duquesne was captured and escaped several times during this period, before infiltrating the British army as an officer, in 1901.  It was in this capacity that he found his parents’ farm in Nylstroom, destroyed under Marshall Horatio Kitchener’s ‘scorched earth’ policy. His sister had been raped and killed, he learned, and his mother was dying in a British concentration camp. Historian Art Ronnie remarked that, “the fate of his country and of his family would breed in him an all-consuming hatred of England.”  Biographer Clement Wood echoed the sentiment, calling Duquesne: “a walking living breathing searing killing destroying torch of hate.”

Duquesne was found out during a plot to assassinate Kitchener, narrowly avoiding execution by swimming away from the “impossible, hopeless, and impregnable prison” of Bermuda.  A week later, the Black Panther was stowed away on a boat to Baltimore.

During this period, Duquesne became involved with the Hippo program, becoming safari guide and personal shooting instructor to President Theodore Roosevelt, himself.

Naturalized an American citizen in 1913, Duquesne became a German spy the following year, as war broke out in Europe.  “Captain Frederick Fredericks”, was sent to Brazil under the guise of “doing scientific research on rubber plants,”  but the real-life German agent for Naval Intelligence’ real job was to disrupt the shipping, of countries at war with Germany.   That twenty-two British merchant ships randomly exploded during this period, is no coincidence.

British MI5 discovered the German agent, using the aliases George Fordam and Piet Niacud (‘Duquesne’, pronounced backward). ‘Niacud” disappeared once again, placing an article in an Argentine newspaper reporting his own murder at the hands of Amazon natives. 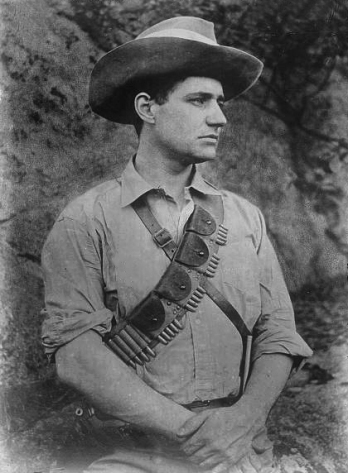 Reappearing once more in New York and using the aliases George Fordam and Frederick Fredericks, Duquesne filed insurance claims for the loss of “films” and “mineral samples” lost in the vessels which he himself sank, off the coast of Brazil. The insurance companies were reluctant to pay and launched their own investigations, while “Fredericks” disappeared once again, re-emerging as the Russian Duke ‘Boris Zakrevsky’ and joining Lord Kitchener on HMS Hampshire in Scotland.

HMS Hampshire sank on June 5, 1916 with heavy loss of life, including that of Kitchener himself. History records the Devonshire-class armored cruiser as having struck a mine.  Some believe the spy had succeeded after all those years, calling in the submarine strike and sinking the Hampshire, killing the Field Marshall before rowing away in a life boat. There were only twelve survivors.

A former-day Forrest Gump with a knack for always being in all the right places, Fritz emerged in 1916 as “Captain Claude Stoughton” of the Western Australian Light Horse regiment, a man who claimed to have been “bayoneted three times, gassed four times, and stuck once with a hook”. As Captain Stoughton, Duquesne would regale New York audiences with hair-raising tales of his war exploits, promoting the sale of Liberty Bonds and making patriotic speeches on behalf of the Red Cross and other organizations.

The insurance fraud caught up with him November 1917, when letters in his possession implicated him in the earlier sabotage, in Brazil. American authorities agreed to extradite Duquesne to Great Britain for “murder on the high seas, arson, faking Admiralty documents and conspiring against the Crown.”

Keeping this guy in prison, though, was like nailing an eel to a jello tree. This was when he faked his paralysis, enduring the needle pokes and prods of skeptical doctors until even they became convinced of his infirmity.

As the Nazi party came to power in the early 1930s, this “Destroying Torch of Hate” for all things British, once again took up the German cause.

Six months before the United States entered World War 2, a large pro-Nazi spy ring was discovered, operating in America. Thirty-three German agents were placed in key jobs around the United States, one opening a restaurant, another working at an airline and others working as delivery men and messengers. The FBI struck on June 29, 1941, arresting all thirty three spies on charges of espionage.  At the center of it all, was none other than Frederick “Fritz” J. Duquesne.

To this day, the Duquesne Spy Ring remains the largest espionage case in United States history, which ended in convictions. Six days after the Imperial Japanese attack on Pearl Harbor, three women and thirty men were convicted of sending secret information on U.S. weapons and shipping movements, to Nazi Germany. Less than a month later, the group was sentenced to a combined total of over 300 years in prison.

Duquesne himself was sentenced to 18 years.  This time, he didn’t get out. The “Man who killed Kitchener” was released fourteen years later, due to failing physical and mental health. Fritz Duquesne died on May 24, 1956, at the City Hospital on Welfare Island. His last known speech took place two years earlier, at the Adventurers’ Club of New York. The title of the lecture, was “My Life – in and out of Prison”.