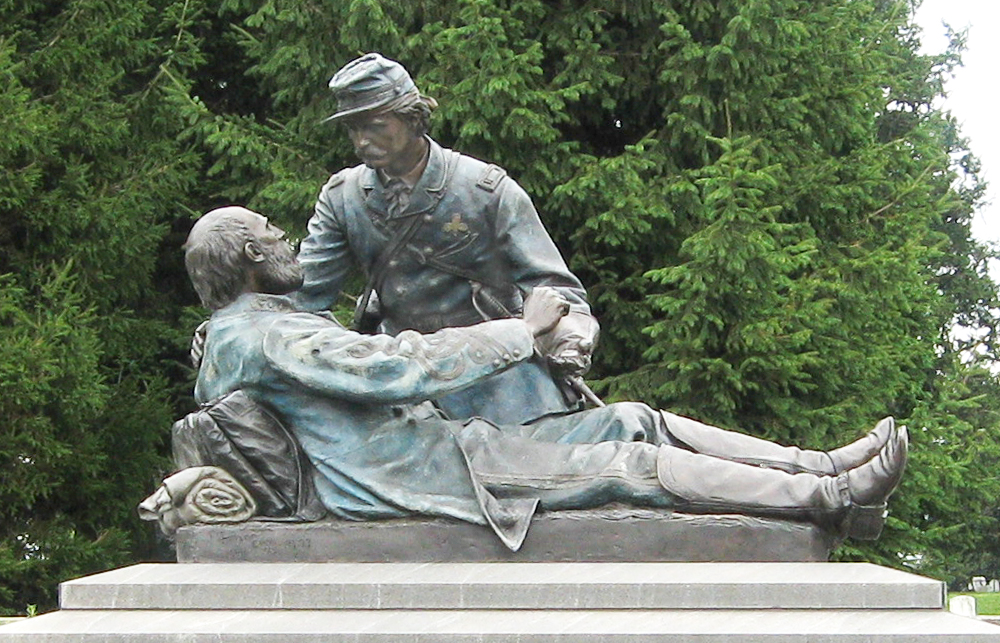 Armistead is a prominent name in Virginia.  The family goes back to colonial days.  Five Armistead brothers fought in the war of 1812. Major George Armistead commanded Fort McHenry during the Battle of Baltimore, the inspiration for Francis Scott Key’s Star Spangled Banner.

Major Armistead became an uncle this day in 1817, to Lewis Addison Armistead, the first of eight children born to General Walker Keith and Elizabeth Stanley Armistead.

“Lothario” or “Lo” to his friends, Armistead followed the family footsteps, attending the Military Academy at West Point.  He never graduated.  Some say he had to resign after breaking a plate over the head of fellow cadet and future Confederate General, Jubal Early.  Others say it was due to academic difficulties, particularly French class.

Be that as it may, Armistead’s influential father gained him a 2nd Lieutenant’s commission awarded in 1839, about the time his former classmates, received theirs.

Armistead’s field combat experience reads like a time-line of the age:  cited three times for heroism in the Mexican-American War, wounded at the Battle of Chapultepec, going on to serve in the Mohave War and the Battle of the Colorado River.

Stellar though his military career was, the man’s personal life was a series of disasters.  Armistead survived two wives and two daughters, only to lose the family farm in a fire.  All while fighting a severe case of Erysipelas, a painful and debilitating Streptococcal skin infection known in the Middle Ages as “St. Anthony’s Fire”.

The act of conjugating the “Be” verb changed after the Civil War.  Before, it was the United States “are”.  Afterward, it became the United States “is”, and not for no reason.  This was a time when Patriotic Americans felt every bit the attachment to states, as to the nation itself.

Though often plagued with doubt, fellow Americans took sides on the eve of the Civil War.  Even brothers.   Like fellow Virginian Robert E. Lee, Armistead wanted no part of secession, but followed his state when the break became inevitable.

Pennsylvania native Winfield Scott Hancock went the other direction, staying with the Union.  Years later, “Hancock the Superb” would be the Democratic candidate for President of the United States, narrowly losing to Republican James A. Garfield.

At a time of rampant political corruption, Hancock was noted for personal integrity.  Though himself a Republican, President Rutherford B. Hayes spoke in terms of admiration:

“[I]f…we are to think first and chiefly of his manhood, his integrity, his purity, his singleness of purpose, and his unselfish devotion to duty, we can truthfully say of Hancock that he was through and through pure gold.”

Neither Armistead nor Hancock were politicians, nor the sort of hotheads responsible for starting the war.  These were professional soldiers, serving together and developing a close personal friendship, as early as 1844.  On final parting on the eve of Civil War, Armistead made Hancock the gift of a new Major’s uniform.

Robert E. Lee intended to break the Federal will to fight at Gettysburg, before moving on to threaten the Union capital, in Washington DC.  ‘Marse Robert” attacked his adversary’s right on that first day, looking for a soft spot in the line. On day two, he went after the left.  On the afternoon of July 3, 1863, Lee came straight up the middle.

Armistead and Hancock looked out across the same field as gray and butternut soldiers formed up along seminary ridge.  The action began with the largest bombardment in the history of the western hemisphere, the mighty crash of 170 guns spread over a two-mile front.  The attack lasted for an hour, most shells flying harmlessly over the Union line and exploding, in the rear.  One shell disturbed the lunchtime mess of that “damn old goggle-eyed snapping turtle” George Gordon Meade, cutting one orderly in half and sending much of the senior staff, diving for cover. 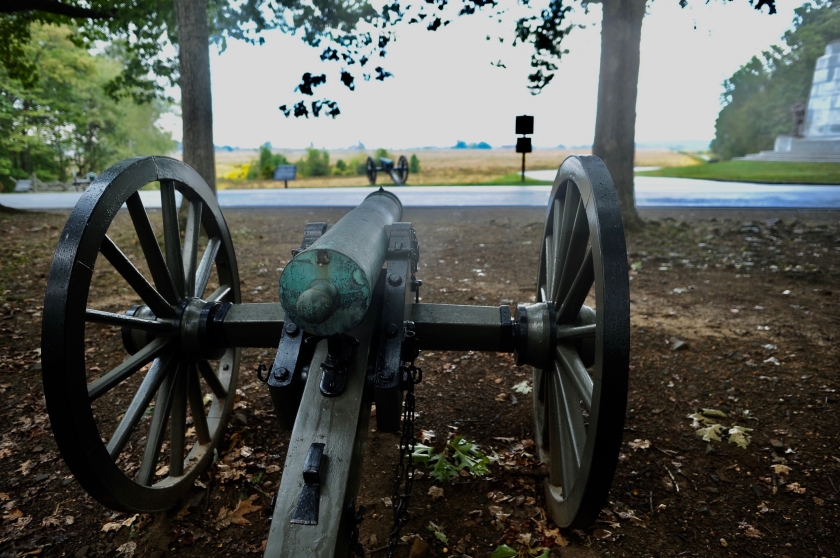 The eighty guns of the Union line responded at first, before going silent, one by one.  In the smoke and confusion, it was easy to believe they were put out of action, but no.  These would be held, until the final assault.

The action has gone into history as “Pickett’s Charge”, though that’s a misnomer.  Major General George Pickett commanded only one of  three Divisions taking part in the assault, under Corps Commander Lieutenant General James Longstreet.

The pace was almost leisurely as Pickett’s, Trimble’s and Pettigrew’s gray and butternut soldiers stepped out of the forest, and over the stone wall.  Twelve to fifteen thousand men crossing abreast, bayonets glinting in the sun, banners rippling in the breeze.  One Yankee soldier described the scene as “an ocean of men sweeping upon us.”

You can’t escape the sense of history, if you’ve ever crossed that field. Stepping off Seminary Ridge with nearly a mile to go, you are awe struck by the mental image of thousands of blue clad soldiers, awaiting your advance.  First come the shells, exploding and tearing jagged holes, where men used to be.  Halfway across and just coming into small arms range, you can’t help a sense of relief as you step across a low spot and your objective, the “copse of trees”, drops out of sight.  If you can’t see them they can’t shoot at you.  Then you look to your right and realize that cannon would be firing down the length of your lines from Little Round Top, as would those on Cemetery Hill, to your left.

Rising out of the draw you are now in full sight of Union infantry.  You hear the tearing fabric sound of rifle fire, exploding across the stone wall ahead.  Cannon have converted to canister by now, thousands of projectiles transforming federal artillery into giant shotguns.  You quicken your pace as your lines are torn apart from the front and sides. Fences hold in some spots along the Emmitsburg Road.  Hundreds of your comrades are bunched up in the attempt to climb over, mowed down where they stand.

Finally you are over, closing at a dead run.  Seeing his colors cut down, Armistead put his hat atop his sword, holding it high and bellowing above the roar of the guns “Come on, boys, give them the cold steel! Who will follow me!” 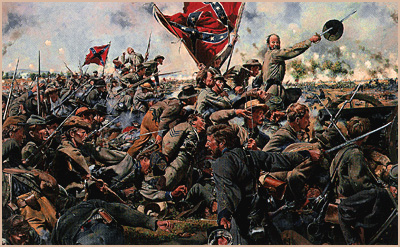 Eight months before, Federal troops were cut down like grass in that frozen December, attacking the Rebel-held stone wall at Fredericksburg.  So numerous were the multitudes of dying and maimed as to inspire the Angel of Marye’s Heights, one of the great acts of mercy, in the history of war.

The savagery of that desperate struggle, can only be imagined.  With a shell fragment entering his shoulder and exiting his back and holding his own intestines with a free hand, Brevet Major Alonzo Cushing directed battery fire into the face of the oncoming adversary, until the bullet entered his mouth and exited the back of his skull.

The “High Water Mark of the Confederacy” marks the point between the corner of a stone wall and that copse of trees, the farthest the shattered remnants of Longstreet’s assault would ever get.  Lewis Armistead made it over that wall before being shot down, falling beside the wheels of a Union cannon.

One day, the nation would reunite.  The two old friends, never did.  As Armistead sat bleeding in the grass, he was approached by Major Henry Bingham, of Hancock’s staff.  Hancock was himself wounded by this time, the bullet striking his saddle pommel and entering his thigh, along with shards of wood and a bent saddle nail. 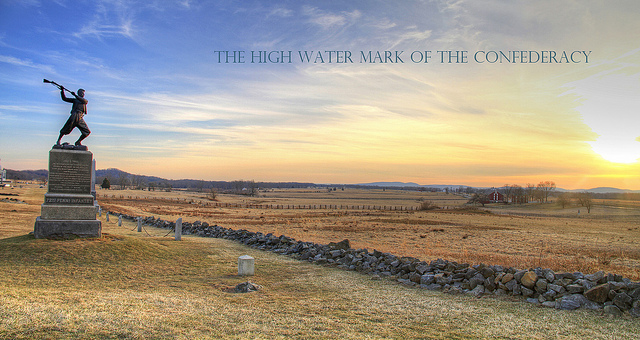 Armistead was grieved at hearing the news.  Bingham received the General’s personal effects, with instructions they be brought to his old friend. To Almira (“Allie”) Hancock, the General’s wife, Armistead gave a wrapped bible and his personal prayer book, bearing the inscription ”Trust In God And Fear Nothing”.

There are those who debate the meaning of Lewis Armistead’s last message, though the words seem clear enough: “Tell General Hancock for me that I have done him and you all an injury which I shall regret the longest day I live.”

Feature image, top of page:  “The Friend to Friend Masonic Memorial is on the south side of Gettysburg in the National Cemetery Annex off Taneytown Road at the intersection with Steinwehr Avenue. (39.8210° N, 77.23177° W)” H/T Gettysburg.stonesentinels.com