Perhaps those on board were thinking about Christmas. Enjoying time with friends and loved ones, after a long deployment. There is no way to know. 256 passengers and crew had only seconds to live. 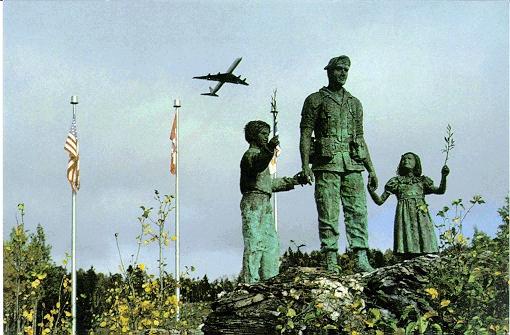 On November 9, 1977, Egyptian President Anwar Sadat of Egypt announced that he would travel to Israel, to speak before the Knesset. The announcement was startling. Egypt and Israel had been in a state of war, since 1948.

On September 17, 1978, President Sadat met with Israeli Prime Minister Menachem Begin at the White House, to sign a pair of agreements. These were the Camp David accords, negotiated in secret over 12 days at the Presidential country retreat, in Maryland. A year later, the two signed the Egypt–Israel Peace Treaty, mediated by US President Jimmy Carter.

Prime Minister Begin and President Sadat would jointly receive the Nobel Prize for their groundbreaking efforts to achieve peace, between the two nations.

President Sadat was assassinated for his role in the negotiations, by members of the Egyptian Islamic Jihad.

According to the terms of the 1979 treaty, a Multinational Force and Observers (MFO) peacekeeping force was deployed to the vicinity of the Sinai peninsula where it remains, to this day.

The flight was the first of three legs, scheduled for refueling stops in Cologne and Gander International Airport, then on to a final destination at Fort Campbell, Kentucky, home of the “Screaming Eagles” of the United States Army 101st Airborne Division.

Passengers departed the aircraft while refueling in Newfoundland, as the flight engineer conducted his external inspection. Then came the new air crew of eight, after which passengers re-boarded the aircraft. Arrow Air Flight 1285 achieved flight velocity at 10:15 on December 12, 167 KIAS (“Knots-Indicated Air Speed”) and accelerating.

Perhaps those on board were thinking about Christmas. Enjoying time with friends and loved ones, after a long deployment. There is no way to know. 256 passengers and crew had only seconds to live.

Airspeed reached 172 KIAS and then began to drop, the aircraft crossing the Trans-Canada Highway some 900-feet from the runway and beginning to descend. Witnesses on the highway below reported seeing a bright light, emanating from inside of the aircraft. Seconds later, flight 1285 crashed some 3,500-feet from departure, breaking apart and striking an unoccupied building near Gander lake, before bursting into flames.

Of 248 servicemen, all but twelve were members of 101st Airborne Division (Air Assault), mostly from the 3d Battalion, 502nd Infantry.  Eleven others were from other Force Command units.  One was an agent with the Criminal Investigations Command (CID).  It was the deadliest air accident to occur on Canadian soil and the United States Army’s single deadliest air crash, in peacetime.  There were no survivors.

Hours later, an anonymous caller phoned a French news agency in Beirut, claiming responsibility on behalf of Islamic Jihad, a wing of Ḥizbu ‘llāh, a Shi’a Islamist political party and militant group based in Lebanon.

The nine-member Canadian Aviation Safety Board (CASB) investigated the crash and issued a report, over the signature of five members:

“The Canadian Aviation Safety Board was unable to determine the exact sequence of events which led to this accident. The Board believes, however, that the weight of evidence supports the conclusion that, shortly after lift-off, the aircraft experienced an increase in drag and reduction in lift which resulted in a stall at low altitude from which recovery was not possible. The most probable cause of the stall was determined to be ice contamination on the leading edge and upper surface of the wing. Other possible factors such as a loss of thrust from the number four engine and inappropriate take-off reference speeds may have compounded the effects of the contamination”.

The CASB minority reported that the accident could have been caused by an onboard explosion of unknown origin prior to impact. Autopsies revealed that some soldiers had inhaled smoke before death, a finding hardly consistent with ice on the wings. Minority member Les Filotas testified before a US Congressional committee, that it was impossible for a thin layer of ice to bring down the aircraft.

There were changes in de-icing procedures, but little confidence in the CASB’s official report.  The Canadian government disbanded the board five years later, replacing it with an independent, multi-modal investigative agency – the Transportation Safety Board of Canada.

The cause of the crash of Arrow Air flight 1285 remains officially, uncertain. Filotas went on to write a book if you’re interested in learning more.

“…Les Filotas, one of the minority who disputed the ice theory, gives a fully-documented insider’s account of the infamous investigation – and of the collapse of a long historical struggle to rid the investigation of aviation accidents of bureaucratic and political entanglements.” – book review, Amazon.com

A memorial was erected at the crash site overlooking Gander Lake, a “Silent Witness”, designed by Kentucky artist, Steve Shields.  That’s it, at the top of this page.

A stone memorial was erected at Fort Campbell, the Gander Memorial bearing the names of the 248, slain.  The scar in the earth is easily seen from the ground as well as from satellite and remains, to this day.

Canadian teenager Janice Johnson wanted to find a way to honor the fallen from flight 1285. “I wanted these Families to know that we as Canadians cared.”

Johnson (now Nikkel) came up with $20 earned from babysitting, and a letter to the Toronto Star.  Nikkel’s letter sparked an international campaign, resulting in 256 Canadian sugar maple trees in 1986, a living memorial to the fallen soldiers and crew, of flight 1285.

What most any Canadian could have told you. Kentucky had to learn the hard way. 20-f00t spacing isn’t enough room, for a grove of sugar maples.

Thirty-two years later, the Gander Memorial grove became crowded and overgrown, most of the trees, no longer viable. The old memorial closed in 2018, to be replaced a year later. Eight of the original trees were transplanted to a better, more visible site and a fresh batch of Canadian sugar maples, added in.

Local woodworkers transformed those original trees into pens, bowls and vases, to be presented to family members of Task Force 3-502nd at dedication ceremonies for the new memorial grove on December 12, 2019.

The old grove is empty now but across the street, 40-foot intervals ensure that 256 Canadian Maples live on in silent witness. A living memorial to the most deadly air disaster on Canadian soil. The largest single-incident loss of life in the storied history, of the 10st Airborne.