In an age before radio or television, John André was a fun and interesting guy to be around. He was a gifted story teller with a great sense of humor. He could draw, paint and cut silhouettes. He was an excellent writer, he could sing, and he could write verse. 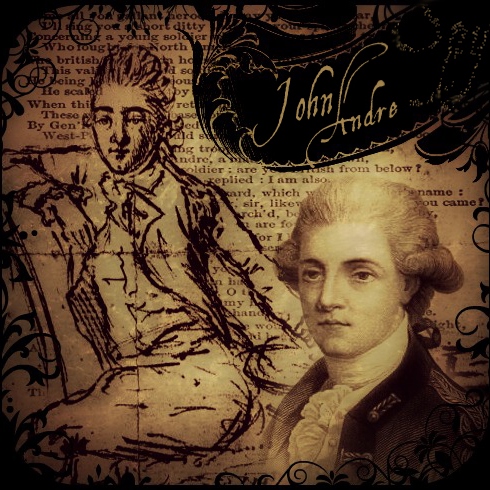 In an age before radio or television, John André was a fun and interesting guy to be around. A gifted story teller with a great sense of humor, Major André was a favorite of Colonial Loyalist society.  He could draw, paint and cut silhouettes. He was an excellent writer, he could sing, and he could write verse.

John André was a British Major at the time of the American Revolution, taking part in his army’s occupations of New York and Philadelphia.  He was also, a spy.

Peggy Shippen was the daughter of a prominent Philadelphia Tory and, for a time, enjoyed a dating relationship with Major André.  Following the French entry into the war on the American side, British General William Howe removed his command from Philadelphia, including Major André.

In 1778, Peggy Shippen met an important officer in the Patriot cause, a hero of Valcour Island, and the Battle of Saratoga.  On April 8, 1779, the couple was married in the Shippen townhouse on Fourth Street   The relationship provided the connection between the British spy and a man who could have gone into history among the top tier of American founding fathers, had he not switched sides.  Peggy Shippen’s new husband, was General Benedict Arnold.

Arnold was Commandant of West Point at the time, the future location of one of our great military academies. At the time, West Point was a strategic fortification on high ground overlooking the Hudson River. The British capture of West Point would have split the colonies in half.

John André struck a bargain with Benedict Arnold which would turn a Hero of the Revolution into a name synonymous with “Traitor”. Arnold would receive £20,000, equivalent to over a million dollars today, in exchange for which he would give up West Point.

Major André sailed up the Hudson River in the Sloop of War HMS Vulture on September 20, 1780. Dressed in civilian clothes, he was returning to his lines on the 23rd. Six papers written in Arnold’s hand were hidden in his sock when three members of the New York militia:  John Paulding, David Williams and Isaac Van Wart stopped him.  Paulding was wearing a Hessian overcoat, and André thought they were Tories. “Gentlemen”, he said, “I hope you belong to our party”. “What party”, came the response and André replied “The lower (British) party”. “We do”, they said, to which André announced himself to be a British officer who must not be detained. That was as far as he went.

The discovery of these papers brought Benedict Arnold’s treachery to light.  Unaware that General Arnold himself was the culprit, Lt. Col. John Jameson dispatched letters to General George Washington and Benedict Arnold, warning the two of the plot.   Washington was literally on the way to a breakfast meeting with Arnold, when the General received the note.  Thus forewarned, Arnold slipped out a side door and escaped to a British ship, waiting nearby. 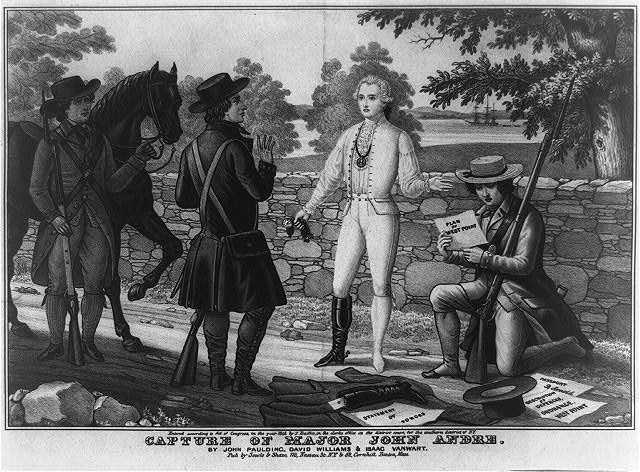 John André was tried and sentenced to death as a spy, and jailed on September 29. He asked if he could write a letter to General Washington. In it he asked not that his life be spared, but that he be executed by firing squad, considered to be a more “gentlemanly” death than hanging.

General Washington believed that Arnold’s crimes were far more egregious than those of John André, and he was impressed with the man’s bravery.  Washington wrote to General Sir Henry Clinton, asking for an exchange of prisoners.

Having received no reply by October 2, Washington wrote in his General Order of the day, “That Major André General to the British Army ought to be considered as a spy from the Enemy and that agreeable to the law and usage of nations it is their opinion he ought to suffer death. “The Commander in Chief directs the execution of the above sentence in the usual way this afternoon at five o’clock precisely.”

During his nine-month stay in Philadelphia, John André lived in Ben Franklin’s home, while the British army occupied the city. As they were packing to leave, Swiss born Pierre Du Simitiere came to say goodbye. He was shocked to find such a fine Gentleman as André, looting the Franklin residence. The man had always been known for extravagant courtesy, and this was completely out of character. He was packing books, musical instruments, scientific apparatus, and an oil portrait of Franklin, offering no defense or even explanation, in response to Simitiere’s protests. 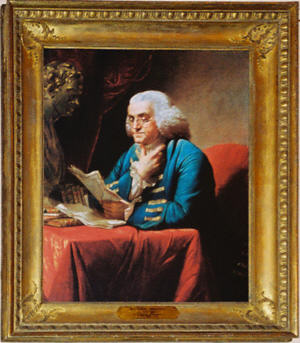 Long afterward, in the early 20th century, the descendants of Major-General Lord Charles Grey returned the painting to the United States, indicating that André had probably looted Franklin’s home under orders from General Grey, himself. A Gentleman always, it would explain the man’s inability to defend his own actions. Today, that oil portrait of Benjamin Franklin hangs in the White House.