The women and children were locked in a village church while the German soldiers looted the town. The men were taken to a nearby barn, where the machine guns had already been set up. 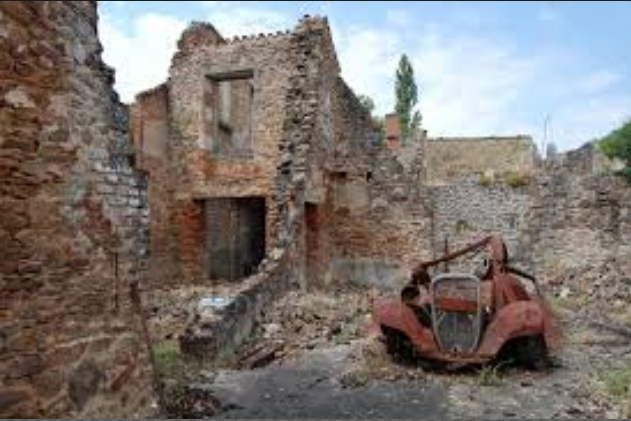 It was D+4 in the invasion of Normandy, and the 2nd SS Panzer Division (“Das Reich”) had been ordered to stop the Allied advance. They were passing through the Limousin region in west central France, when SS-Sturmbannführer Adolf Diekmann received word that Waffen-SS officer Helmut Kämpfe was being held by French Resistance forces in the village of Oradour-sur-Vayres.

Diekmann’s battalion sealed off the nearby village of Oradour-sur-Glane, unaware that they had confused it with the other village. Everyone in the town was ordered to assemble in the village square to have their identity papers examined. The entire population of the village was there, plus another 6 unfortunates who were riding their bicycles in the wrong place, at the wrong time.

The women and children were locked in a village church while German soldiers looted the town. The men were taken to a nearby barn, where machine guns had already been set up.

The Germans aimed for the legs when they opened fire, intending to inflict as much pain as possible. Five escaped in the confusion before the SS lit the barn on fire. 190 men were burned alive. 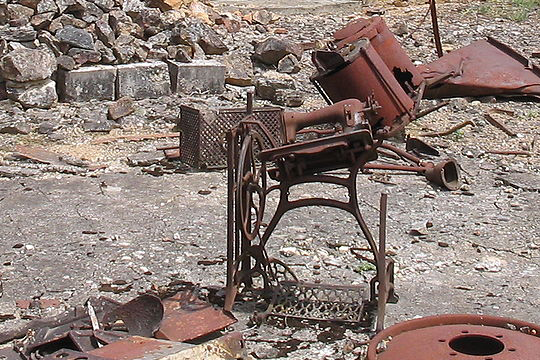 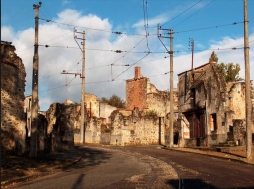 Nazi soldiers then lit an incendiary device in the church, and gunned down 247 women and 205 children as they tried to get out.

642 inhabitants of Oradour-sur-Glane, age one week to 90 years, were murdered in a few hours, the village razed to the ground. After the war, French President Charles de Gaulle ordered that the village remain as is; a memorial to the cruelty of collective punishment, and the savagery committed by the Waffen-SS in countless places: the French towns of Tulle, Ascq, Maillé, Robert-Espagne, and Clermont-en-Argonne; the Polish villages Michniów, Wanaty and Krasowo-Częstki, Warsaw; the Soviet village of Kortelisy; the Lithuanian village of Pirčiupiai; the Czechoslovakian villages of Ležáky and Lidice; the Greek towns of Kalavryta and Distomo; the Dutch town of Putten; the Yugoslavian towns of Kragujevac and Kraljevo, and the village of Dražgoše, in what is now Slovenia; the Norwegian village of Telavåg; the Italian villages of Sant’Anna di Stazzema and Marzabotto. And on, and on, and on.

French President Jacques Chirac dedicated a memorial museum in 1999, the “Centre de la mémoire d’Oradour”. The village stands today as the Nazis left it, 73 years ago today. It may be the most forlorn place on earth.

The story was featured in the 1974 British television series “The World at War”, narrated by Sir Laurence Olivier. The first and final episodes of the program began with these words: “Down this road, on a summer day in 1944. . . The soldiers came. Nobody lives here now. They stayed only a few hours. When they had gone, the community which had lived for a thousand years. . . was dead. This is Oradour-sur-Glane, in France. The day the soldiers came, the people were gathered together. The men were taken to garages and barns, the women and children were led down this road . . . and they were driven. . . into this church. Here, they heard the firing as their men were shot. Then. . . they were killed too. A few weeks later, many of those who had done the killing were themselves dead, in battle. They never rebuilt Oradour. Its ruins are a memorial. Its martyrdom stands for thousands upon thousands of other martyrdoms in Poland, in Russia, in Burma, in China, in a World at War”.