Most of France was riveted by the Caillaux affair in July 1914, ignorant of the European crisis barreling down on them like the four horsemen of the apocalypse.

We heard a lot this past election year, about “Left” and “Right”, “Liberal” and “Conservative”.

The terms have been with us a long time, originating in the early days of the French Revolution. In those days, National Assembly members supportive of the Monarchy sat on the President’s right.  Those favoring the Revolution, on the left. The right side of the seating arrangement began to thin out and disappeared altogether during the “Reign of Terror”, but re-formed with the restoration of the Monarchy, in 1814-1815. By this time, it wasn’t just the “Party of Order” on the right and the “Party of Movement” on the left. Now the terms began to describe nuances in political philosophy, as well.

200 years later, differences between the French left and right of the period, would be recognizable to American political observers of today.

Joseph Cailloux (rhymes with “bayou”) was a left wing politician, appointed prime minister of France in 1911. The man was indiscreet in his love life, even for a French politician. Back in 1907, Cailloux had paraded about with a succession of mistresses, finally carrying on with one Henriette Raynouard, while both were married to someone else. They were both divorced by 1911 and that October, Henriette Raynouard became the second Mrs Cailloux.

The right considered Cailloux to be far too accommodating with Germany, with whom many felt war to be all but inevitable. While serving under the administration of President Raymond Poincare in 1913, Cailloux became a vocal opponent of a bill to increase the length of mandatory military service from two years to three, intended to offset the French population disadvantage between France’ 40 million and Germany’s 70 million.

Gaston Calmette, editor of the leading Conservative newspaper Le Figaro, threatened to publicize love letters between the former Prime Minister and his second wife, written while both were still married for the first time. Henriette Cailloux was not amused.

On March 16, 1914, Madame Cailloux took a taxi to the offices of Le Figaro. After being shown into Calmette’s office, the pair spoke only briefly, before Henriette withdrew the Browning .32 automatic, and fired six rounds at the editor. Two missed, but four were more than enough to do the job. Gaston Calmette was dead within six hours.

German Chancellor Otto von Bismarck once said the next great European war would start with “some damn fool thing in the Balkans”.  Though no one realized it at the time, Bismarck got his damn fool thing on June 28, when a Serbian Nationalist assassinated the heir apparent to the Austro-Hungarian throne.

The July Crisis of 1914 was a series of diplomatic maneuverings, culminating in the ultimatum from Austria-Hungary to the Kingdom of Serbia. Vienna, with tacit support from Berlin, made plans to punish Serbia for her role in the assassination, while Russia mobilized armies in support of her Slavic ally.

Meanwhile, England and France looked the other way.  In Great Britain, officialdom was focused on yet another home rule crisis concerning Ireland, while all of France was distracted by the “Trial of the Century”.

Think of the OJ trial, only in this case the killer was a former First Lady. This one had everything: Left vs. 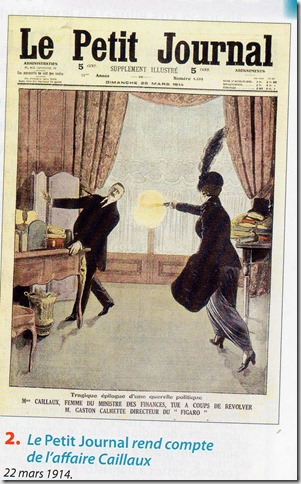 Right, the fall of the powerful, and all the salacious details anyone could ask for. Most of France was riveted by the Caillaux affair in July 1914, ignorant of the European crisis barreling down on them like the four horsemen of the apocalypse. Madame Caillaux’s trial for the murder of Gaston Calmette began on July 20.

She was acquitted on July 28, the jury ruling the murder to be a “crime passionnel”.  A crime of passion. That same day, Austria-Hungary declared war on Serbia.

In the days that followed, the Czar would begin the mobilization of men and machines that would place Imperial Russia on a war footing. Imperial Germany invaded Belgium, in pursuit of the one-two punch strategy by which they sought first to defeat France, before turning to face the “Russian Steamroller”. England declared war in support of a 75 year old commitment to protect Belgian neutrality, a treaty obligation that German diplomats had dismissed as a “scrap of paper”.

Eleven million military service members and seven million civilians who were alive in July of 1914, would not live to see November 11, 1918.