Ramzi Yousef is said to have considered adding cyanide in the bomb, and later regretted not having done so

Ramzi Yousef arrived at JFK International Airport on September 1, 1992, traveling under a false Iraqi passport. His companion Ahmed Ajaj tried to enter with a forged Swedish passport, and was arrested. Though his entry was illegal, Yousef was claiming political asylum. He was given a hearing date before an INS magistrate, and admitted.

After setting up residence in Jersey City, Yousef connected with the blind Muslim cleric Sheikh Omar Abdul Rahman at the Al-Farooq Mosque in Brooklyn. There he was introduced to his co-conspirators, immediately beginning the assembly of a 1,310 lb urea-nitrogen hydrogen gas enhanced explosive device.

Yousef was injured in a car crash in late 1992, and ordered many of the chemicals for this device from his hospital bed. It’s surprising how easy it was for these guys.

The plan was to attack the north tower of the World Trade Center in Manhattan, toppling it into the south tower and taking them both down.

The yellow Ryder van entered lower Manhattan on the morning of Friday, February 26, 1993, driven by Ramzi Yousef and Eyad Ismoil. The pair pulled into the B-2 underground parking level under the north tower, lit the 20′ fuse, and fled.

As with the device used in the Beirut barracks bombing of 1983, this was a fuel-air explosive (FAE), designed to magnify and sustain the blast effect by mixing fuel with atmospheric oxygen. The main charge was surrounded by aluminum, magnesium and ferric oxide particles and surrounded by three hydrogen gas cylinders, to intensify the fireball and afterburn of those solid metal particles.

The US Defense Intelligence Agency conducted a study of fuel-air explosives, reporting: “What kills is the pressure wave, and more importantly, the subsequent rarefaction [vacuum], which ruptures the lungs…. If the fuel deflagrates but does not detonate, victims will be severely burned and will probably also inhale the burning fuel. Since the most common FAE fuels, ethylene oxide and propylene oxide are highly toxic, undetonated FAE should prove as lethal to personnel caught within the cloud as most chemical agents”.

Ramzi Yousef is said to have considered adding cyanide in the bomb, and later regretted not having done so.

The terrorist device exploded at 12:17:37, hurling super-heated gasses from the blast center at thirteen times the speed of sound. Estimated pressure reached 150,000 psi, equivalent to the weight of 10 bull elephants.

The bomb ripped a 98-foot wide hole through four sub-levels of concrete, killing five Port Authority employees and A dental products salesman, who was parking at the time. The real death toll was seven, if you’re inclined to include secretary Monica Rodriguez Smith’s seven-month pregnancy. She was killed with her unborn baby, while checking timesheets.

Another 15 were left with with traumatic blast injuries. 1,042 more were injured, many inhaling the thick, acrid smoke filling stairwells and elevator shafts.

Power went out instantly trapping hundreds in elevators, including a group of 17 kindergartners, on their way down from the south tower observation deck.

Engineers believe that the terrorists would have accomplished their purpose of toppling the building, had they placed their explosive device  closer to the building’s concrete foundations.

300 FBI agents combed through the rubble of the underground parking garage, finding an axle fragment containing the Ryder van’s VIN. Mohammed Salameh, who had rented the vehicle, reported the van stolen and was arrested on March 4, when he came to get his deposit back.

Abdul Rahman Yasmin, the only person associated with the bombing who was never prosecuted in the United States, was interviewed for a 60 minutes segment in 2002. He was being held prisoner in Baghdad at that time. He has not been seen or heard of, since the 2003 invasion of Iraq. “The Blind Sheikh”, Omar Abdul Rahman, was convicted in October 1995 of seditious conspiracy, and sentenced to life +15 years. He died in prison last week, at the age of 78.

A granite memorial fountain was erected above the site of the explosion and dedicated in 1995, bearing the names of the six adult victims of the attack. Under the names appear this inscription. “On February 26, 1993, a bomb set by terrorists exploded below this site. This horrible act of violence killed innocent people, injured thousands, and made victims of us all.”

The fountain was destroyed with the rest of the World Trade Center, on September 11, 2001. 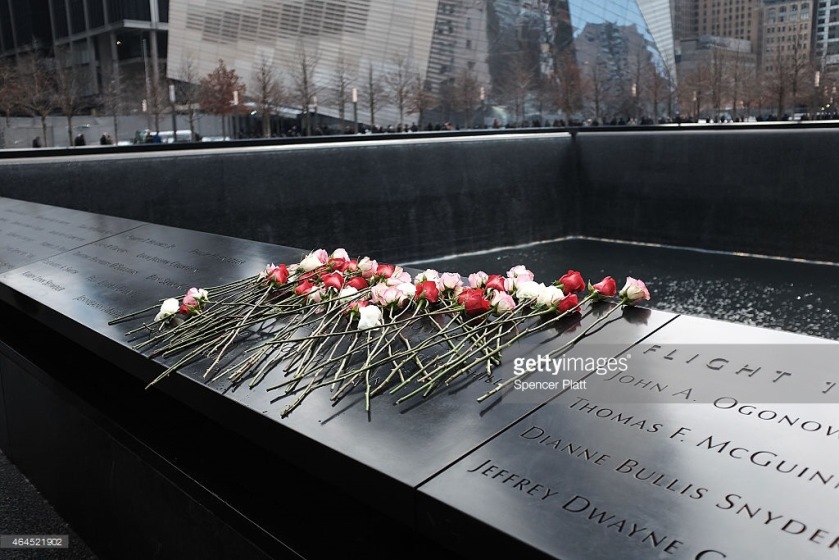 Tactical Explosive Detection Dogs, or “TEDDs”, come in many shapes and sizes. They can be German Shepherds, Labrador Retrievers or Belgian Malinois. Even Pit Bulls. The first thing they have in common is a high “ball drive”

Tactical Explosive Detection Dogs, or “TEDDs”, come in many shapes and sizes. They can be German Shepherds, Labrador Retrievers or Belgian Malinois.  Even Pit Bulls. The first thing they have in common is a high “ball drive”. To these dogs, a tennis ball is the beginning and end of all joy. From that starting place, the dog is trained to associate finding a bomb with getting the tennis ball as a reward. The results can be astonishing.

The first official American bomb dogs were used in North Africa in the 1940s, where they were used to detect German mines. Today’s TEDD is a highly specialized and well trained soldier, working with his handler and able to detect 64 or more explosive compounds.

Military Working Dog (MWD) Lex was one such dog, deployed to Iraq with the United 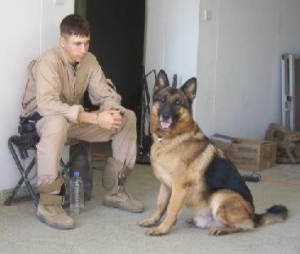 States Marine Corps in 2006. The dog’s second deployment began in November, when he was paired with Marine Corporal Dustin J. Lee, stationed in the military police department at Marine Corps Logistics Base (MCLB), “Albany”.

Detached as an explosive detection and patrol team for the 3rd Reconnaissance Battalion, then part of Regimental Combat Team 6, the pair was patrolling a Forward Operating Base on March 21, 2007, when they were hit by a 73 mm SPG-9 rocket attack. Lee was mortally wounded, Lex severely injured with multiple shrapnel wounds. Despite his own injuries, Lex refused to leave his Marine and had to be dragged away before corpsmen could attempt treatment. There is little in this world to compare with the magnificent loyalty of a dog.

The most dreadful moment in the life of any parent, is when they receive word of the death of a child. It wasn’t long after Jerome and Rachel Lee were so notified, that they began efforts to adopt Lex. Dustin was gone, but they wanted to make his partner a permanent part of their family.

An online petition was created by the Lee family, soon gaining national media attention as well as that of Congressman Walter B. Jones of North Carolina’s 3rd congressional district, which includes Camp Lejeune. US armed forces don’t commonly release MWDs prior to retirement age, but there can be exceptions.

Meanwhile, Lex had gone through a 12-week recuperation at Camp Lejeune, later re-deployed to MCLB Albany on July 6. He was once again at full working capacity, despite the more than 50 pieces of shrapnel veterinary surgeons had left in his back, fearing that removal would cause permanent damage to his spine.

Lex was at this time under the jurisdiction of the Air Force working dog program managers at Lackland Air Force Base.  Marine Corps Headquarters made a formal request for the dog’s release in November. Lex was released on December 6, and turned over to the Lee family in a ceremony on December 21, 2007.

Lex was 8 years old at the time.  He soon began to visit VA hospitals, comforting wounded veterans and assisting in their recovery. He received an honorary purple heart in February, 2008, and the 7th Law Enforcement AKC Award for Canine Excellence in September.  On March 19, 2010, the base dog kennel at MCLB Albany was named in honor of Corporal Dustin J. Lee, with Lex in attendance.

Lex’ injuries troubled him for the rest of his life, despite stem cell regenerative therapy at Georgetown Veterinary Hospital, assisted by the Humane Society of the United States and Kentucky Congressman Ed Whitfield. Lex succumbed to cancer on March 25, 2012. 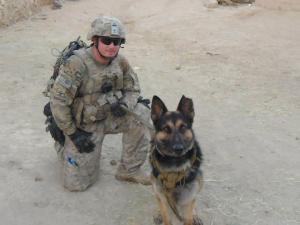 In telling this story, I wish in some small way to honor my son in law Nate and daughter Carolyn, who together experienced Nate’s deployment as a Tactical Explosives Detection Dog handler with the US Army 3rd Infantry Division in Soltan Kheyl, Wardak Province, Afghanistan. Months after departing “The Ghan” in 2013, the couple was reunited with Nate’s “Battle Buddy”, MWD Zino, who is now retired and lives with them in Savannah.  “Here & Now”, broadcast out of ‘Boston’s NPR News Station’ WBUR, did a great story on the reunion.  You can hear the radio broadcast HERE.  Thanks for the great job, Alex.