To this day the spill at Church Rock remains the US’ worst nuclear disaster, and best kept secret.

They call themselves Diné, (din neh) meaning literally, “the people”. Originally a hunter/gatherer culture, the Diné are believed to have migrated from northwestern Canada and eastern Alaska long before there were such place names, around the year 1400. Mostly hunters and gatherers at this time, they lived in a region known as Dinétah, occupying parts of the modern American states of Utah, Colorado, Arizona and New Mexico.

Over time, the Diné adopted the farming methods of the Pueblo peoples, mainly the “three sisters” of corn, squash and beans. They acquired livestock, sheep and goats mostly, the animals becoming not only food sources but also symbols of wealth, and status. Tewa-speaking pueblo groups called them Navahu, meaning large areas of cultivated land. Spanish settlers knew them as, Navajo.

In the 21st century, many Navajos live a traditional lifestyle including language, religious practices a social structure based on kinship, and locality of residence. Despite the legacy of bitterness resulting from 19th century conflicts between first nations and relative newcomers to the North American continent, Navajos have volunteered for military service in numbers disproportionate to their population.

During World War 1 some 10,000 “Indians” including Navajo served the United States armed services both as volunteers, and conscripts. Navajo “code talkers” served a pivotal role during World War 2, building on the work of the Choctaw during the “Great War” and producing secret communications based on native languages, indecipherable to the adversary.

The number four is sacred to the Navajo people. The four cardinal directions of north, south, east and west. The four seasons. The four original clans and the creation story, of four worlds. Four mountains mark the land given to the people of Navajo lore, by the creator. The four day-parts of dawn, day, dusk and night. Four colors correspond to each of four mountains marking the land: the color white for shell, the blue of turquoise, the shimmering black of obsidian and the color yellow, representing but one shade of the multi-colored abalone.

A yellow that most assuredly DOES NOT symbolize, Uranium.

In August 1939, a letter written by physicist Leó Szilárd and signed by Albert Einstein warned President Franklin Roosevelt that Nazi Germany was working to develop a war-winning super weapon. A bomb, capable of obliterating entire cities in a single blast. The American-led effort to produce such a weapon began in 1942, the US Army component of the team at first headquartered in Manhattan. So began the ultra-secret “Manhattan Project” culminating in the Trinity test blast of July 16, 1945 and that famous line from the “father of the atomic bomb” J. Robert Oppenheimer, quoting from the Bhagavad Gita:

First used during WW1 to harden the steel hulls of ocean-going vessels, vanadium is often bound with oxygen and other substances in a lemon yellow, radioactive mineral called carnotite. One of the substances contained in this “yellow dirt”, is Uranium.

First identified by German chemist Martin Klaproth in 1789, Uranium is 40 times as common as silver but only rarely found, in concentration. The ancient Romans used the stuff in its natural oxide form as early as the year 79, to add a yellow hue to ceramic glazes.

The Navajo were no strangers to the yellow rocks of the Dinetah, possessed as it is of one of the highest concentrations of such minerals, on the planet. Fed by the need to defeat Nazi Germany, the 1942 “discovery” of yellow dirt on Navajo lands set off a feeding frenzy from which the people, have yet to recover.

Such concentrations were well suited to the work of men and wheelbarrows and Navajo men went to work, as miners. That the stuff was dangerous in high concentrations was well known to mining corporations, military and government officials alike, but no matter. There was a war going on.

The squared-off contours of blasted rock it turned out, made for very fine building material. The by-products of Uranium mines could be used in a cement nearly the equal of concrete, so these unstable, mildly radioactive minerals were concentrated not only in the lives of Navajo miners but also in their homes, in which they built masonry additions. The ovens in which they cooked their bread were often built, using yellow rocks. The clothing of Navajo children playing outside were stained by yellow dust.

Even among those not in daily contact with dangerous minerals many lacked running water, on the reservation. Water resources themselves were often contaminated.

World War 2 gave way to the “cold war” but the need for uranium, seemed without end. Sickness and death occurred among the Navajo in numbers disproportionate, to their population. Cancers of the liver, kidney, stomach and lungs. A mélange of symptoms affecting mostly (but not entirely) children received a name, hitherto unheard of: “Navajo Neuropathy“. 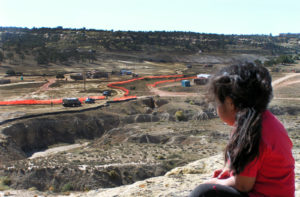 “William McCray, 4, overlooks a clean up operation of radium and uranium contaminated soils near his home on Oct. 9, 2009. Uranium mining from the mid-1900s left over 500 unregulated mines scattered once mining stopped in 1986. Photo by Teddy Nez” – H/T indiearizona.com

Helen Nez is but one person, among many. For most of her adult life she drank from a spring located on Navajo lands, in northeastern Arizona. Uranium levels were at least five times greater than safe drinking water standards, but who knew? The stuff has no odor. It has no taste. Helen Nez gave birth, ten times. Four of her children died, as toddlers. Three died as young adults, their bellies bloated, their eyes, turned gray. The last three are all adults now. All of them have serious health problems.

Four generations of Navajo have come and gone since that first discovery, in 1942. Activist types have come, and they went home. Mining company commitments to restore the land to its original form, failed to materialize. Elected officials conducted hearings. Congressmen with familiar names like Waxman and Udall showed seemingly genuine concern, but little came of it. Bureaucratic Washington offered bland and infuriatingly meaningless responses to pointed questions. The EPA even refused assistance to one family whose hilltop home was the victim of “natural” radiation. Until their “hill” was demonstrated to be a pile of mine waste.

By 1977, the discarded by-products of Uranium mines formed piles large enough climb and enjoy the view, but I wouldn’t recommend it. That was the year United Nuclear Corporation took a different approach. A pond.

Mining and crushing up to 4,000 tons of ore daily leaves a prodigious amount of waste. “Yellowcake” is extracted leaving a sandy sludge, called tailings. These may contain up to 85% of the radioactivity, of the original ore. Another byproduct of the acid leach solvent extraction process is called “liquor”, a witches brew containing Thorium-230, Radium-222, Lead-210 and other isotopes.

At 5:30am on July 16, 1979, the dam holding back the Church Rock tailings pond, gave way . A thousand tons of Uranium mill waste and 93 million gallons of acidic, radioactive tailings solution gushed through an ever-widening breach in the dam, down the pipeline arroyo and into the Puerco River, a tributary to the Little Colorado River.

Was there anyone alive on March 28, 1979, who didn’t hear about Three Mile Island? The New York-Washington media corridor went wall to wall with coverage as they tend to do, with stories that effect them personally.

And yet, the Church Rock nuclear release four months later far exceeded that of Three Mile Island. Ever hear of Church Rock? Don’t feel bad if the answer is no. The “News” just wasn’t that into it. The Navajo Nation requested a disaster declaration from New Mexico Governor Bruce King, in order to facilitate federal assistance with the cleanup. For reasons which remain unclear, the governor refused such a declaration.

Between 1944 and 1986 some 521 mines extracted 30 million tons of Uranium ore from Navajo lands. Most of that was sold to the United States Atomic Energy Commission, until 1966, the only customer.

In 1990, the Radiation Exposure Compensation Act (RECA) was passed into law establishing an administrative framework for compensating victims of radiation, whether from atmospheric nuclear testing or employment in uranium mining. As of April 20 2018, 34,372 claims have been approved with total compensation amounting to $2,243,205,380. On June 7, 2022, the president signed into law the RECA Extension Act of 2022. This law extends the termination of the RECA Trust Fund and the filing deadline for all claims for two years from its date of enactment.

Thus far, several Navajo have received the maximum compensation allowed under the act, of $100,000. Even so. It’s difficult to understand how something like this remains to torment so few, for so many years. All that really matters is results. Everything else is excuses.

“The 2020-2029 Ten-Year Plan continues the effort of the previous Five-Year Plans and identifies the next steps in addressing the human health and environmental risks associated with the legacy of uranium mining on the Navajo Nation. The Ten-Year Plan was developed in cooperation with multiple federal partner agencies including Bureau of Indian Affairs, Department of Energy, Nuclear Regulatory Commission, Navajo Area Indian Health Service, and the Agency for Toxic Substances and Disease Registry to incorporate goals and milestones for achieving assessment and cleanup actions”.

Special hat tip to LA Times journalist Judy Pasternak for her disturbing and important new book, Yellow Dirt. Much of the material in this essay is based on her work.