General Alfred Jodl came to Reims to sign the document including the phrase “All forces under German control to cease active operations at 2301 hours Central European time on 8 May 1945“. 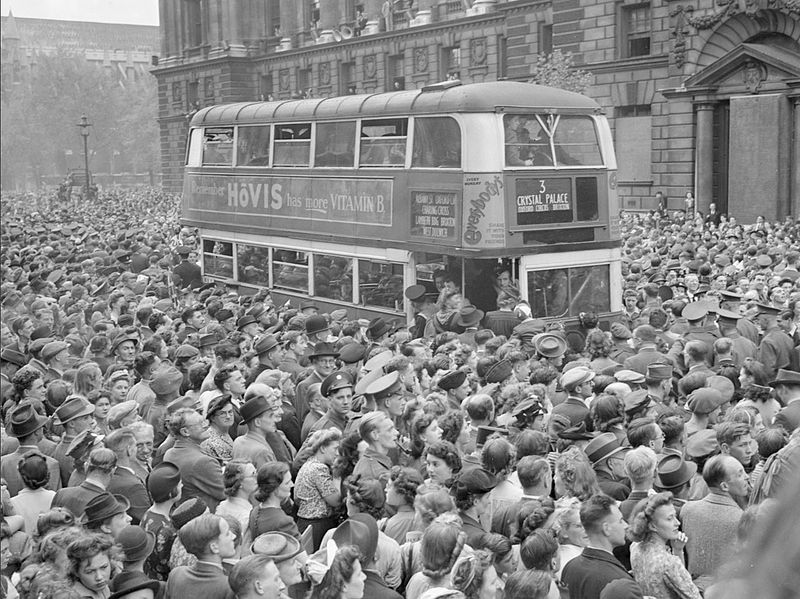 Beginning on May 5, reporters from AP, Life magazine, and others began to sleep on the floor of Eisenhower’s red brick schoolhouse headquarters, for fear of stepping out and missing the moment. Adolf Hitler was dead by his own hand, the life of the German tyrant extinguished on April 30.

General Alfred Jodl came to Reims to sign the document including the phrase “All forces under German control to cease active operations at 2301 hours Central European time on 8 May 1945“.

The signing of the instruments of surrender ending the most destructive war in history took place on Monday, May 7, at 2:41am, local time.   In Europe, World War II had come to an end.The German government announced the end of hostilities right away to its own people, but most of the Allied governments, remained silent.   It was nearly midnight the following day when Field Marshal Wilhelm Keitel signed a second instrument of surrender, in the Berlin headquarters of Soviet General Georgy Zhukov.

Soviet Premier Josef Stalin had his own ideas about how he wanted to handle the matter while the rest of the world, waited.

In England, May 7 dragged on with no public statement. Large crowds gathered outside of Buckingham Palace shouting “We want the King”. Bell ringers throughout the British Isles remained on silent standby, waiting for the announcement. The British Home Office issued a circular, instructing Britons how they could celebrate: “Bonfires will be allowed, but the government trusts that only material with no salvage value will be used.” And still, the world waited.

Prime Minister Winston Churchill finally lost patience in the early evening, saying he wasn’t going to give Stalin the satisfaction of holding up what everyone already knew. The Ministry of Information made this short announcement at 7:40pm: “In accordance with arrangements between the three great powers, tomorrow, Tuesday, will be treated as Victory in Europe Day and will be regarded as a holiday”.

The news was greeted with reserve in the United States, where the first thought was that of the Pacific. Even now, many months of savage combat lay ahead. President Harry Truman broadcast his own address to the nation at 9:00am on May 8, thanking President Roosevelt and wishing he’d been there to share the moment.

Franklin Delano Roosevelt had died on April 12 in Warm Springs, Georgia. President Truman’s speech begins: “This is a solemn but a glorious hour. I only wish that Franklin D. Roosevelt had lived to witness this day. General Eisenhower informs me that the forces of Germany have surrendered to the United Nations. The flags of freedom fly over all Europe. For this victory, we join in offering our thanks to the Providence which has guided and sustained us through the dark days of adversity”.

So it is that most of the world celebrates May 8 as Victory in Europe, “VE Day”, the day of formal cessation of all hostilities, by Nazi Germany. And yet in some sectors, the fighting continued.

German military operations officially ceased on May 8, a day celebrated as VE Day in in the United States, Great Britain, Western Europe and Australia. VE Day occurs on May 9 in the former Soviet territories, and New Zealand.

Even so isolated pockets of resistance continued to surrender day through May 14-15. The “Georgian uprising” of some 400 German troops and 800 allied Georgian soldiers under German officers continued until May 20 on the Dutch island of Texel (pronounced “Tessel).

The last major battle in Europe concluded on May 25 between the Yugoslav Army and Croatian Armed Forces. One contingent of German soldiers lost radio communications in Spitsbergen in the Norwegian archipelago and surrendered to a group of seal hunters, on September 4. Two days after the formal surrender of Imperial Japan and the end of war, in the Pacific.