239 years ago today this Republic to which we owe so much, was about to die before it was born.  All but for one magnificent man with an actor’s sense of timing.  And a new pair of spectacles. 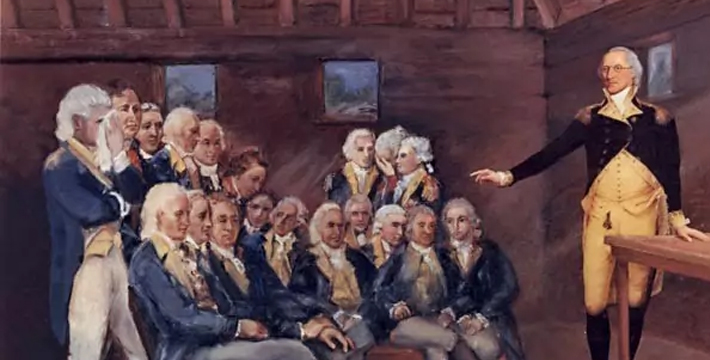 While no one knew it at that time, Lord Cornwallis’ October 1781 surrender at Yorktown effectively brought the great rebellion, to an end.  Eight years after the “shot heard round the world“, the American Revolution had now ground to a standoff.

King George III remained personally in favor of prosecuting the war even after the Patriot victory at Yorktown while opinion in Parliament, was split.  Across the water, some 26,000 British troops remained in occupation in Charleston, Savannah and New York and backed up, be a mighty fleet of warships.

The Americans’ greatest ally departed in 1782, never to return.  With state finances already prostrate with debt, l’Ancien régime (French: “the old order”) would be overthrown by its own revolution inside the next ten years, the French King Louis XVI and Queen Consort Marie Antoinette executed, by guillotine.

Negotiations carried on in Paris for nearly three years while, an hour’s drive north of New York by modern highway, the Continental Army waited at Newburgh.

France wasn’t the only nation ruined by this war.  The American Revolution debilitated the finances of all three principle belligerents, none more so than the new-born American Republic, itself.  In fact, the fledgling United States nearly died on this day in 1783, by the very hands which had given it birth.

The Articles of Confederation, ratified by the states in March 1781, provided for a loose alliance of sovereign states. In theory, Congress possessed the authority to govern foreign affairs, conduct war and regulate currency.  In practice, these powers were limited to a national body with no authority to enforce its own will on the states.

In 1780, Congress promised Continental officers a lifetime pension, equal to half-pay upon discharge.  The government in Philadelphia attempted to amend the Articles, to allow a new import duty or “impost”.  States were divided against the measure.  Two years later, the cupboard was bare.  Forget the bonus, Continental soldiers weren’t being paid, at all.

It wasn’t even possible to borrow.  That required evidence of an income stream.

The politician who alienates a battle hardened army in the field walks on dangerous ground.  Don’t pay for their services, that’s a good way to do it.  At the outset of war, these guys had left homes and fields and families. They had risked their lives on behalf of the dream of Liberty, to say nothing of the hardships endured by those left at home.  Many among their number had given all in service to that dream.

There was little to do but wait during those long winter months of 1782-’83.  Each man concerned with his own financial hardship every man worried his promised compensation, would never come.  The rumor mill worked overtime:  The Army would be disbanded.  Promised pensions would remain, unfunded.

The vague unease of rumor turned to a fury of near certainty through the late winter months, as one overture after another met with defeat, in Congress.  On March 10, an unsigned letter believed to be written by Major John Armstrong, aide to General Horatio Gates, urged unspecified action against the Continental Congress.  Another called for a meeting on the morning of the 11th.  Events were inexorably building toward military insurrection.

General Washington reacted quickly, objecting in his general orders of March 11 to the “disorderly” and “irregular” nature of such a meeting.  Washington specified the morning of March 15 for an officer’s meeting and requested a report implying that he himself, would be absent.

The mood was one of surprise and anger the morning of March 15, 1783, when the Commander-in-Chief himself walked into the room. Hard men had been pushed past the point of patience and were now determined, to take action.  Now this.

The General urged patience in a brief and impassioned speech remembered as the Newburgh address. Washington’s words may as well have fallen on deaf ears.  There was little of the usual deference in this room.

The future President of the United States then produced a letter from a member of Congress, to read to his officers. The content of the letter is unimportant. The man we remember as the father of the nation gazed at the letter in his hands, without speaking. Fumbling in his pocket, the general came up with a pair of reading glasses. This was something new.  Few in the room even knew the man required glasses.

Gentlemen, you will permit me to put on my spectacles, for I have not only grown gray but almost blind in the service of my country.

The words were as a physical blow on the men assembled in that room.  Obstinate and unheeding only moments earlier, the realization dawned on all at once.  This man had been at their head and by their sides.  General Washington had personally endured every bit of the hardship, as men now bent on mutiny.

There was hardly a dry eye in the place.  The moment was broken, never to return.  Bent on mutiny only moment before, the cream of the continental army now determined, to wait.

On this day 239 years ago this Republic to which we owe so much, nearly died before it was born.  All but for one magnificent man with an actor’s sense of timing.  And a new pair of spectacles.

At age 26, George Washington married Martha Dandridge Custis, a widow with two children: Jacky and Patsy. The Father of the Nation never had any children of his own. At 6 feet, 3½ inches and 200-pounds, George Washington towered above the Continental soldier who stood an average 5-feet 8-inches, in height.