“A daguerreotype is a unique image — it isn’t a print, it isn’t a reproduction of any kind. When you have a camera set up to take a daguerreotype and the sitter is in front of you, for example, one of these old men who actually looked and knew and talked to leaders of the Revolution … the light is coming from the sun, hitting his face, and bouncing off of his face through the camera and onto that very same plate.”- Joseph Bauman 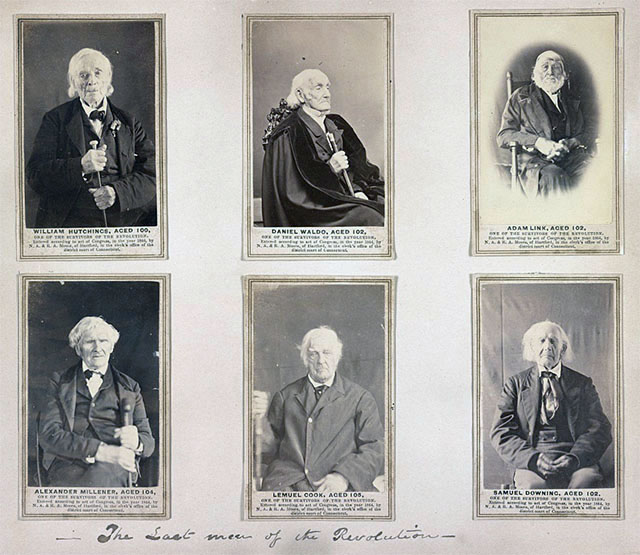 Imagine seeing the faces of the men who fought the American Revolution.  Not the paintings. There’s nothing extraordinary about that, except for the talent of the artist.  I mean their photographs – images that make it possible for you to look into their eyes. The windows, of their souls.

In a letter dated May 17, 1781 and addressed to Alexander Scammell, General George Washington outlined his intention to form a light infantry unit, under Scammell’s leadership.

Comprised of Continental Line units from Connecticut, Massachusetts and New Hampshire, the Milford, Massachusetts-born Colonel’s unit was among defensive forces keeping Sir Henry Clinton penned up in New York City, as the Continental army made its way south to a place called Yorktown.

Among the men under Scammell’s command was Henry Dearborn, future Secretary of War under President Thomas Jefferson. A teenage medic was also present.  His name was Eneas Munson.

One day, the medic would go on to become Doctor Eneas Munson, professor of the Yale Medical School in New Haven Connecticut,  President of the Medical Society of that same state.  And a man who would live well into the age of photography.

The American Revolution ended in 1783.  By the first full year of the Civil War, only 12 Revolutionary War veterans remained on the pension rolls of a grateful nation.

Two years later, Reverend EB Hillard brought two photographers through New York and New England to visit, and to photograph what were believed to be the last six.  Each man was 100 years or older, at the time of the interview.

William Hutchings of York County Maine, still part of Massachusetts at the time, was captured at the siege of Castine at the age of fifteen.  British authorities said it was a shame to hold one so young a prisoner, and he was released.

Adam Link of Maryland enlisted at 16 in the frontier service.

Alexander Millener of Quebec was a drummer boy in George Washington’s Life Guard.

Clarendon, New York native Lemuel Cook would live to be one of the oldest surviving veterans of the Revolution, surviving to the age of 107.  He and Alexander Millener witnessed the British surrender, at Yorktown.

Samuel Downing from Newburyport, Massachusetts, enlisted at the age of 16 and served in the Mohawk Valley under General Benedict Arnold.  “Arnold was our fighting general”, he’d say, “and a bloody fellow he was. He didn’t care for nothing, he’d ride right in. It was ‘Come on, boys!’ ’twasn’t ‘Go, boys!’ He was as brave a man as ever lived…He was a stern looking man, but kind to his soldiers. They didn’t treat him right: he ought to have had Burgoyne’s sword. But he ought to have been true. We had true men then, twasn’t as it is now”.

Hillard seems to have missed Daniel F. Bakeman, but with good reason.  Bakeman had been unable to prove his service with his New York regiment.  It wasn’t until 1867 that he finally received his veteran’s pension by special act of Congress.

Daniel Frederick Bakeman would become the Frank Buckles of his generation, the last surviving veteran of the Revolution. The 1874 Commissioner of Pensions report said that “With the death of Daniel Bakeman…April 5, 1869, the last of the pensioned soldiers of the Revolution passed away.  He was 109.

Most historians agree on 1839 as the year in which the earliest daguerreotypes became practically accessible.

When Utah based investigative reporter Joe Bauman came across Hillard’s photos in 1976, he believed that there must be others.  Photography had been in existence for 35 years by Reverend Hillard’s time.  What followed was 30 years’ work, first finding and identifying photographs of the right vintage, and then digging through muster rolls, pension files, genealogical records and a score of other source documents, to see if each had played a role in the Revolution.

There were some, but it turned out to be a small group.

Peter Mackintosh for one, was a 16-year-old blacksmith’s apprentice, from Boston.  He was working the night of December 16, 1773, when a group of men ran into the shop scooping up ashes from the hearth and rubbing them on their faces.  Turns out hey were going to a Tea Party.

James Head was a thirteen year-old Continental Naval recruit from a remote part of what was then Massachusetts.  Head would be taken prisoner but later released, walking the 224 miles home from Providence to the future town of Warren, Maine.

Head was elected a Massachusetts delegate to the convention called in Boston, to ratify the Constitution.   He would die the wealthiest man in Warren, stone deaf from service in the Continental Navy.

George Fishley served in the Continental army and fought in the Battle of Monmouth, and in General John Sullivan’s campaign against British-allied Indians in New York and Pennsylvania.

Fishley would spend the rest of his days in Portsmouth New Hampshire, where he was known as ‘the last of our cocked hats.”

Daniel Spencer fought with the 2nd Continental Light Dragoons, an elite 120-man unit also known as Sheldon’s Horse after Colonel Elisha Sheldon.  First mustered at Wethersfield, Connecticut, the regiment consisted of four troops from Connecticut, one troop each from Massachusetts and New Jersey, and two companies of light infantry. On August 13, 1777, Sheldon’s horse put a unit of Loyalists to flight in the little-known Battle of the Flocky, the first cavalry charge in history, performed on American soil

Bauman’s research uncovered another eight in addition to Hillard’s record including a shoemaker, two ministers, a tavern-keeper, a settler on the Ohio frontier, a blacksmith and the captain of a coastal vessel, in addition to Dr. Munson.

The experiences of these eight span the distance from the Boston Tea Party to the battles at Monmouth, Quaker Hill, Charleston and Bennington.  Their eyes looked upon the likes of George Washington, Alexander Hamilton and Henry Knox, the battles of the Revolution and the final surrender, at Yorktown.

Bauman collected the glass plate photos of eight and paper prints of another five along with each man’s story and published them, in an ebook entitled “DON’T TREAD ON ME: Photographs and Life Stories of American Revolutionaries”.

To look into the eyes of such men is to compress time. To reach back over the generations before the age of photography, and look into eyes that saw the birth of a nation.