About a week after Confederates first fired on Fort Sumter a female bald eagle laid a clutch of eggs, somewhere in Wisconsin. 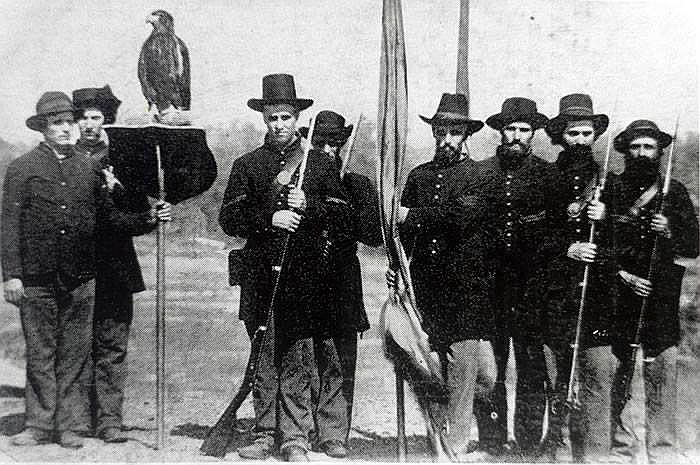 In 1861, leader of the Lac du Flambeau Ojibwe band O-k-ma-key-sik, “Chief Big Sky” captured an eaglet, and sold it for a bushel of corn to saloon keeper Daniel McCann of Chippewa County, Wisconsin.

Militia members were asked to pitch in twenty-five cents as was one particular civilian:  tavern-keeper S.M. Jeffers.  Jeffers’ refusal earned him “three lusty groans”, to which he laughed and told them all, to keep their quarters.

Jeffers threw in a single quarter-eagle, a gold coin valued at 250¢, and that was that.   From that moment onward, the militia unit called itself the Eau Claire “Eagles”.

Perkins’ Eagles entered Federal Service as Company C of the 8th Wisconsin Volunteer Infantry Regiment.  It wasn’t long before the entire Regiment adopted the bald eagle, calling themselves the “Eagle Regiment”, in honor of their new mascot.  Much deliberation followed as to what to name him, before it was decided.  The bird would be called “Old Abe”.

Old Abe accompanied the regiment as it headed south, travelling all over the western theater and witness to 37 battles. David McLain wrote “I have frequently seen Generals Grant, Sherman, McPherson, Rosecrans, Blair, Logan, and others, when they were passing our regiment, raise their hats as they passed Old Abe, which always brought a cheer from the regiment and then the eagle would spread his wings”.

Abe became an inspirational symbol to the troops, like the battle flag carried with each regiment. Colonel Rufus Dawes of the Iron Brigade recalled, “Our eagle usually accompanied us on the bloody field, and I heard [Confederate] prisoners say they would have given more to capture the eagle of the Eighth Wisconsin, than to take a whole brigade of men.”

Confederate General Sterling Price spotted Old Abe on his perch during the battle of Corinth, Mississippi.  “That bird must be captured or killed at all hazards”, Price remarked. “I would rather get that eagle than capture a whole brigade or a dozen battle flags”.

Old Abe was presented to the state of Wisconsin at the end of the war. He lived 15 years in the “Eagle Department”, a two-room apartment in the basement of the Capitol, complete with custom bathtub, and a caretaker.  Photographs of Old Abe were sold to help veteran’s organizations. He was a national celebrity, traveling across the country and appearing at the 1876 Centennial Exposition in Philadelphia, the 1880 Grand Army of the Republic National Convention, and dozens of fundraising events.

A small fire broke out in a Capitol basement workshop, fed by cleaning solvents and shop rags.  The fire was quickly extinguished thanks to the bald eagle’s cries of alarm, but not before Old Abe inhaled a whole lot of that thick, black smoke.  Abe’s health began to decline, almost immediately.  Veterinarians and doctors were called, but to no avail.  Bald eagles have been known to live as long as 50 years in captivity. Old Abe died in the arms of caretaker George Gilles on March 26, 1881.  He was 20.

Since 1915, Old Abe’s replica has watched over the Wisconsin State Assembly Chamber of the new capitol building.

In 1921, the 101st infantry division was reconstituted in the Organized Reserves with headquarters in Milwaukee.  It was here that the 101st first became associated with the “Screaming Eagle”.  The Screaming Eagles of the 101st Airborne participated in the D-Day invasion, the Battle of the Bulge, Operation Market Garden, and Bastogne and late became the basis of the HBO series “A Band of Brothers”.

After WWII, elements of the 101st Airborne were mobilized to Little Rock by President Eisenhower to protect the civil rights of the “Little Rock Nine”, a group of black students enrolled in Little Rock Central High School in September 1957, as the result of the US Supreme Court’s landmark ruling in the historic Brown v. Board of Education case.

For 104 years, Old Abe appeared in the trademark of the J.I. Case farm equipment company of Racine, Wisconsin.

Winston Churchill once said “A lie gets halfway around the world before the truth has a chance to get its pants on.”  We all know how stories change with the retelling.  Some stories take on a life of their own.  Ambrose Armitage, serving with Company D of the 8th Wisconsin Infantry, wrote in his diary on September 14, 1861, that Company C had a “four month old female eagle with them”.   Two years later, Armitage wrote, “The passing troops have been running in as they always do to see our eagle. She is a great wonder”.

Ten years after his death, a national controversy sprang up and lasted for decades, as to whether Old Abe was, in fact, a “she”.  Suffragettes claimed that “he” had laid eggs in the Wisconsin capitol.  Newspapers weighed in, including the Washington Post, Detroit Free Press, St. Louis Post Dispatch, Oakland Tribune, and others.

Bald eagles are not easily sex-differentiated. There are few clues available to the non-expert, outside of the contrasts of a mated pair.  It’s unlikely that even those closest to Old Abe, had a clue as to the eagle’s sex.

University of Wisconsin Biotechnology Center Sequencing Facility researchers had access to four feathers, collected during the early days at the Grand Army of the Republic Memorial Hall.  In March of 2016, samples were taken from the hollow quill portion (calamus) of each feather, and examined for the presence of two male sex chromosomes (ZZ) or both a male and female chromosome (ZW). After three months, the results were conclusive.  All four samples showed the Z chromosome, none having a matching W.

After 155 years, Old Abe wasn’t about to lay any eggs.