Abraham Lincoln was neither the first nor the last to fall from a high place, and live to tell the tale. 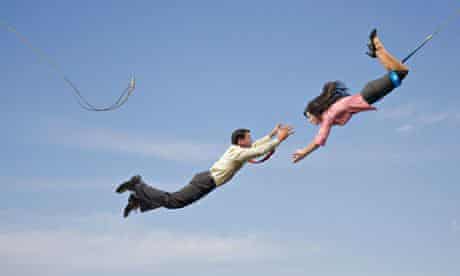 In 1840, a young politician found himself in a legislative minority, opposed to a payment to the Illinois State Bank.  In order to prevent a quorum, a handful of Whigs attempted to leave the chamber.  Finding the door locked, our man stepped to a second-story window, and jumped out.  Abraham Lincoln would come to regret what he called his “window scrape”, but the future 16th President was far from the first person to fall from a high place.  Voluntarily, or otherwise.

The term is “Defenestrate”: to throw a person or thing, out of the window.

Jezebel, yeah that Jezebel, the unlovable Queen of Israel from the Bible, was executed by defenestration, in 842BC.

In 1618, three regents of the imperial crown were thrown from the window of the Prague castle, 70-feet from street level. Things hadn’t worked out so well 200 years earlier, when a burgomaster and 13 members of the Prague town council, were similarly defenestrated.

All three survived this time, thanks to the help of mythic angels, according to friends and supporters. Detractors weren’t quite so kind, attributing the trio’s survival to a pile of horseshit. Be that as it may, one of them became a noble thanks to the emperor, and received a title: Baron von Hohenfall. (“Baron of Highfall“). Honest. I couldn’t make up a thing like that.

Since the age of aircraft there are tales of survival, enough to make Baron Highfall’s adventures look like stepping from a curb.

In 2009, pilot error put Yemenia Flight 626 into aerodynamic stall over the Indian ocean. Alone among 153 passengers and crew, 14-year-old French schoolgirl Bahia Bakari found herself the sole survivor, clinging to wreckage and floating in pitch black heavy seas, for 13 hours.

Base jumper James Boole plunged 6000-feet landing on snow covered rocks in 2009 while filming another jumper, in Russia. “This is going to hurt a lot” he later recounted to the guardian newspaper, “or not at all”. Boole broke his back that time but he was at it again, a year later.

In December 1971, lighting struck LANSA Flight 508 over the Amazon rainforest, breaking the Lockheed Electra to pieces. 17-year-old Juliane Koepcke plunged 10,000 feet still strapped to her seat and survived despite deep gashes and a broken collarbone. Koepcke, the daughter of German scientists working in the Amazon, had grown up a “jungle child”. If you’re lost in the jungle her father would say, follow a stream. Water will always lead you to civilization. For ten exhausting days she trekked through knee-deep water, poking the ground ahead of her to scare away rays and dodging crocodiles.

With maggot infested wounds and nothing to live on but candy scrounged from the wreck, Juliane found her salvation on day 11 at the hands of remote fishermen. Following a period of recovery, she led search parties back to the scene of the crash. It was then that she learned, astonishingly, that her mother had also survived the crash only to succumb to her injuries, days later. Now Juliane Diller, she returned to Germany and followed her parents, into the physical sciences. Her autobiography came out on this day in 2011, if you want to learn more of her story. When I Fell from the Sky (German: Als ich vom Himmel fiel). That must be one hell of a story.

In 1985, two sky divers became tangled during a 12,000-foot jump near Victoria Australia. Frank’s injuries were minor. Dave Hodgman wasn’t so lucky but still returned to jumping, within three months.

21 year old RAF Flight Sergeant Nicholas Stephen Alkemade found himself under attack by German aircraft on March 24, 1944. With his parachute burned away and his aircraft in a burning death spiral, Alkemade chose a quick death over being burned alive. At 18,000 feet. The tail gunner regained consciousness looking up from the snow, at the stars above. He lit a cigarette. With a sprained ankle, the airman was easily captured. German interrogators were so impressed with his story they gave him a certificate, attesting to his tale.

Joe Herman of the Royal Australian Air Force was blown out of his bomber, in 1944. Free falling through the night sky Herman grabbed wildly for anything he could get hold of. It happened to be the leg of fellow airman John Vivash. Herman hung on for dear life and returned the favor, hitting the ground first and breaking the fall, for his benefactor. Herman walked away with two broken ribs.

In 1943, American turret gunner Alan Magee was forced to jump from the B-17F Snap! Crackle! Pop!, four miles through the skies over France. He fell 22,000 feet, crashing through the glass roof of the St. Nazaire railroad station. On the ground, his German captors were astonished. With 28 shrapnel wounds, massive internal injuries and a right arm all but severed the man lived on, for another 61 years.

Soviet Airforce Lieutenant Ivan Chisov bailed out of his Ilyushin Il-4 bomber, at 22,000 feet. He intended to freefall out of the combat zone so as not to be gunned down by vengeful German pilots, while dangling from his parachute. And a fine plan it was, too, until he lost consciousness, due to the altitude. Chisov hit the snowy embankment at somewhere between 120 and 150 miles per hour, breaking his pelvis and injuring his spine. He was flying again, three months later.

In January 1972, Croatian terrorists placed a briefcase bomb on JAT Air flight 367 from Stockholm, to Belgrade. The bomb exploded, breaking the aircraft into three pieces. Serbian flight attendant Vesna Vulović survived the fall with a fractured skull and brain bleeding, two broken legs and three broken vertebra. Vulović passed the next 27 days in a coma and remembers nothing after greeting passengers, on the flight. When offered sedatives for her return flight to Belgrade, she declined the injection. With no memory of the crash, there was nothing to be afraid of.

At 33,330 feet, Vesna Vulović is listed in the Guinness book of world records, for surviving the highest fall.

If you’re ever caught in such a situation, experts advise that you spread out your arms and legs to create as much drag, as possible. How one becomes “expert” in such a subject, remains unexplained. Let me know how it works out, if you ever give it a try. As for myself I think I might bend down if I was a little more flexible, and kiss my behind goodbye.