This is no lifeless “garden of stone”.  The final resting place for over 400,000 honored dead is itself a living memorial, combining tens of thousands of native and exotic plants in a unique blending of landscapes, combined with formal and informal gardens.

As the Civil War ground on to a fourth dreadful year, the church yards and burial plots of the formerly United states strained under the weight of carnage, produced by the cataclysm of war.

The 37th Congress declared the former home of Mary Anna Randolph Custis Lee and Robert Edward Lee forfeit for non-payment of tax, the Mansion on the hill and surrounding grounds auctioned to the Federal government. 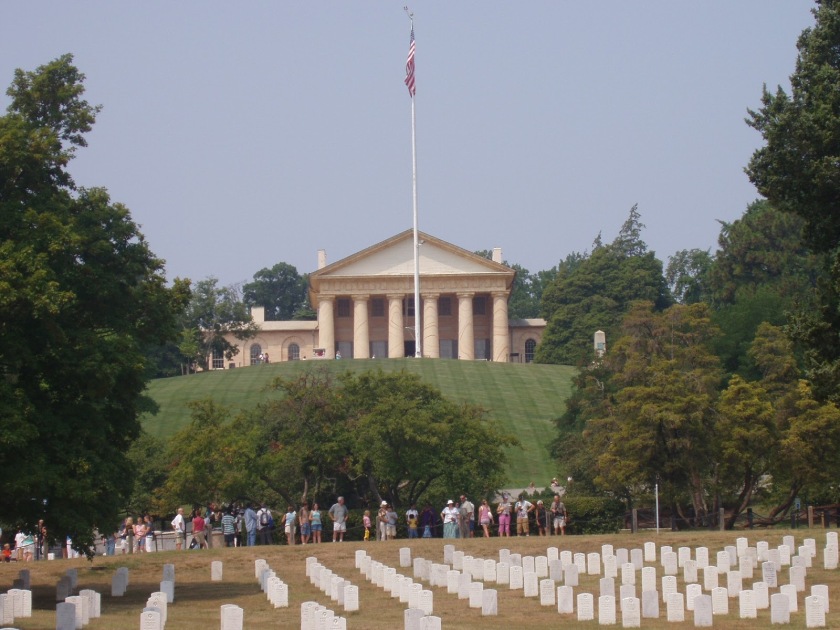 One day, the United States Supreme Court would rule the act an unlawful taking and compensate Lee family descendants, but that must be a story for another day. As 1863 drew to a close, the property was destined to become the nation’s most hallowed ground and known to posterity, as Arlington National Cemetery.

The first military interment on the Custis-Lee property was that of Private William Henry Christman of the 67th Pennsylvania Infantry, laid to rest on May 13, 1864.  On June 15, the War Department officially set aside 200 acres, for use as a cemetery.

And yet, this is no lifeless “garden of stone”.  The final resting place for over 400,000 honored dead is itself a living memorial, combining tens of thousands of native and exotic plants in a unique blending of landscapes, combined with formal and informal gardens.

Every week, 80 to 100 military service members, veterans and their loved ones go to their final rest in Arlington National Cemetery.  Not one of them goes alone. Since 1948, a volunteer with the “Arlington Ladies” attends each and every one of them, 365 days a year, seven days a week.

Thousands of native and exotic trees representing 325 varieties and species fill the landscape with color.  The first and last impression of the visitor is that of beauty, and a sense of peace. 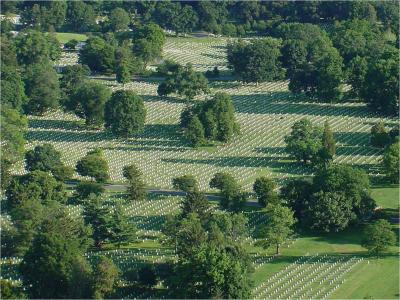 Three of these trees are Virginia state champions and one is state co-champion, including the Royal Paulownia, (Paulownia tomentosa) at the top of this page.  State champion trees are those having the greatest height, crown spread and trunk circumference, for their species.

Take a single species of tree, for instance, the eastern Redbud (Cercis canadensis), of which 165 specimens live at Arlington. Each tree stands 10′ to 30′ tall, with pink and purple flowers emerging directly from bark and branches in early April. Five-inch wide, heart shaped leaves emerge later in the spring. At first a glossy purple, by summer they have turned to green and pods have begun to grow.  Like pea pods, they grow green to reddish during the early months, later turning to black before falling off. In late winter, there is no more striking contrast with a fresh fall of snow.

The cemetery also has 24 Chinese Redbuds, a strain native to central China. These are only two of Arlington’s hundreds of varieties of flowering trees.

Some 8500 trees dot the 624 acres of Arlington 140 of which, are memorial trees.  Nearly 200 are removed every year and another 240, planted.  Every tree in the place will be pruned at least once, every four years.

Bring your walking shoes, and you’ll have to leave your pooch, behind.  In 2013, cemetery authorities permitted bicycles on a specified route between 8:00 a.m. and 6:45 p.m., from April 1 to September 30.  Today, be prepared to walk. Effective October 26, 2016, policy prohibits bicycles on Cemetery grounds, without a family pass.  “As there are no bike paths on the cemetery grounds, mixing cyclists with pedestrians and vehicles creates a safety hazard”.

The Cemetery’s horticulture division recently installed 297 tree labels, identifying many of the cemetery’s noteworthy specimens. Thirty-six of them form a right angle along Farragut & Wilson Drive, lending a sense of history as each is a direct descendant of a famous ancestor, each a living memorial to recipients of the Medal of Honor. 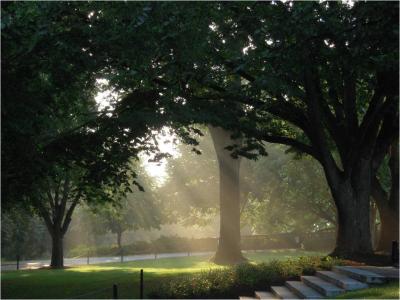 Ancestors of these “tree descendants” include the Cottonwood of Delta Colorado, which shaded the peace meetings between settlers and Ute tribes in 1879. The Sweetgum of the Westmoreland, Virginia home of four generations of the Lee family, including Richard Henry and Francis “Lightfoot” Lee.  The only brothers to have signed the Declaration of Independence. The great Charter Oak of Connecticut is represented there, a specimen sprouted sometime in the 12th or 13th century. There is the American Sycamore descended from a “witness tree” at Gettysburg. There is the Red Maple from Walden Woods, outside of Boston, and the Sycamore Maple, witness to George Washington’s crossing of the Delaware.

Other tree ancestors include the Water Oak next to the Brown Chapel African Methodist Church in Selma, where Reverend Martin Luther King, Jr. delivered his “We Shall Overcome” speech, before setting out on the 50-mile march to Montgomery.  The George Washington American Holly was grown from seeds gathered at Mount Vernon. Helen Keller climbed the 100-year-old Water Oak, as a child.  The Overcup Oak descends from a tree which shaded the birthplace of the 16th President of the United States, Abraham Lincoln.

The River Birch near the amphitheater and dedicated May 8, 1932, stands in silent tribute to the nameless mother of the unknown soldier.

For years, the 624-acre grounds at Arlington have been a living memorial.  Some of the most beautiful gardens you are ever going to see, the work is performed by a full-time staff of three Master Gardeners and a small army of contractors. In 2013, Arlington received official accreditation as a level II arboretum by the Morton Register of Arboreta.

A living memorial taking its place on the nation’s most comprehensive list of arboreta and public gardens and designated the Arlington National Cemetery Memorial Arboretum.

This story is dedicated to Norman Franklin Long, whose service in the “War to End All Wars” earned him eternal rest in our nation’s most hallowed ground.   A man who left us the night my brother and his namesake, was born.  A man for whom I will always be that little boy, fishing by his side.   Sleep sweet, Grampa.