As the result of a friendly wager and Navy’s 10-17 loss in the 2018 game, acting SECNAV Thomas Modly announced this week, the planned construction of the Navy’s newest Destroyer. The “USS Jeff Monken” will be named after the 37th head coach, of the United States Army’s football program. 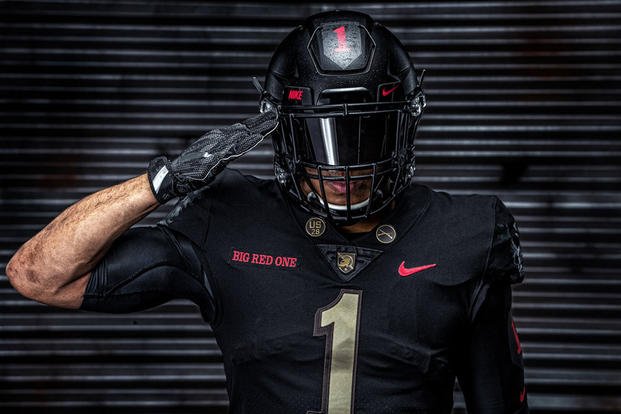 Sometime during the 1893 football season, a navy doctor told Midshipman Joseph Reeves that another kick to the head could result in “instant insanity”, even death.

Reeves commissioned an Annapolis-area shoemaker to build him a leather covering, thus making himself the father of the modern football helmet. Years later, this man of the battleship era became an ardent supporter of naval air power. Today, Admiral “Bull” Reeves is widely known as the “Father of Carrier Aviation”.

The naval academy’s football program is one of the oldest in the country, dating back to 1879.  The canvas jersey of that year is believed to be the first college football uniform.

The Army got into the game the following year, when Navy challenged Army cadets in what was then a relatively new sport. 271 members of the corps of cadets pitched in 52¢ apiece to pay for half of Navy’s travel expenses, for that first game in 1890. That first game was played on November 29, ending in a humiliating loss for the cadets at West Point, 24-0.

The Black Knights had their revenge the following year, defeating Navy at Annapolis, 32-16.  The two teams met some 30 times between 1890 and 1930, before the game became an annual event.

The two met in Chicago on November 27, 1926 in a National Dedication of Soldier Field, as a monument to American servicemen killed in the War to end all Wars.

More than just inter-service “bragging rights” are at stake. Only 17 schools can boast of having winners, of the prestigious Heisman Trophy. Army and Navy, combine for five.

West Point and Annapolis fielded some of the best teams in college football, during the first half of the 20th century. In 1944 and ’45 with the country at war, Army and Navy entered that final game of the season,with perfect records. Army finished both seasons, undefeated.

Today, size and weight restrictions combine with a five-year military service commitment, while dreams of NFL careers draw some of the best football talent away from the service academies. Since 1963, only four seasons have seen both teams enter the Army-Navy game with winning records. Yet, the game remains a college football institution, receiving radio coverage every year since the late 1920s, and broadcast on national television, since 1945.

The first instant replay in American football history made its debut during the 1963 Army–Navy game.

The Army-Navy game may be the purest such event in all of college sports. These young men play for the love of the game, knowing the next few years will lead not to careers in business or sport, but to the United Sates military.

President Dwight Eisenhower earned the distinction of being the only future President in history to play the Army-Navy game in 1912, alongside future General of the Army, Chairman of the Joint Chiefs of Staff and teammate, Omar Bradley.

The only game ever played west of the Mississippi was the Rose Bowl of 1983, earning the DoD Wisconsin Senator William Proxmire’s not-so-coveted “Golden Fleece” award for blowing $100,000 to transport cadets, midshipmen and mascots, to Pasadena.

How I miss those days when government pretended to look out for our money.

With capacities of only 38,000 and 34,000 respectively, Army’s Michie Stadium and Navy’s Navy–Marine Corps Memorial Stadium are far too small, to hold the assembled crowd. Out of 117 games, only six have been played on either campus. Two of those (1942-’43), were due to WWII travel restrictions.

The Army-Navy game was canceled in 1963, part of a 30-day period of mourning, following the assassination of President John F. Kennedy.  Knowing her husband to be a big fan, First Lady Jacqueline Kennedy requested the game go on.  Quarterback Roger Staubach lead his #2 nationally ranked team to a 21-15 Navy victory.

For most seniors, the “First Classmen” of either academy, the Army-Navy game carries special meaning. Some may go on to play in a bowl game, but for most, this is the last regular season football game, each will ever play. In times of war, they and others like themselves will be among the first to go, in defense of the country.  Some won’t come back alive.

The game is particularly emotional for this reason. Despite intense rivalry, it would be hard to find a duel in all of sports, where the two sides hold the other in higher regard.

The game is steeped in tradition. As opposites cheer them on, each side takes the field in a spectacle of precision drill, unmatched in any venue outside the military. After the game, teams assemble to sing the almae matres to the assembled students and fans of each institution, ‘On Brave Old Army Team’ and ‘Anchors Aweigh’.

The first such serenade is always performed for those of the losing academy, hence the coveted position of “singing second”, signifying the victor of this, the oldest sports rivalry in service academy history.

Respect and tradition is all well and good, but such rivalries do not come without a share of debauchery. During junior year, selected “Middies” and Cadets attend courses with the opposite military academy. On game day, each is restored in a “prisoner exchange”, returning from their semester in “enemy territory”.

Goats have a long history with all things maritime, having gone to sea since the age of sail and eating all manner of garbage and other undesirable food in exchange for which, she provided companionship, milk and butter. British explorer and naturalist Sir Joseph Bank’s nanny goat was the first creature two-legged or four, to circumnavigate the planet, twice.

Navy had multiple mascots during the early years, including a gorilla, two cats, a bulldog, and a carrier pigeon. Legend has it a beloved goat once died aboard a Navy cruise.  Two ensigns cavorted about wearing the skin during half-time, before making their way to the taxidermist.

Navy won that game.  A live goat named “El Cid” (The Chief) appeared at the fourth Army-Navy game, in 1893. Navy won that game too, the third victory of those first four games. Small wonder that Billy goats have been the Navy mascot, since 1904.

The 2016 matchup was attended by “Bill” the Goat #XXXVI and his backup, Bill #XXXVII.
Small wonder too, why Army cadets will go to any length, to kidnap that goat. The first such kidnapping of the modern era, took place in 1953.

The pre-dawn raid of November 5, 1995 resulted in the ‘goatnapping’ of the entire stable, of Navy mascots. The Pentagon was notified, and the goats returned under a joint Army/Navy policy, prohibiting the “kidnapping of cadets, midshipmen or mascots”.

Cadets pulled off the caper in 2002, disguised in Grateful Dead T-shirts. “Operation Good Shepherd” launched in 2007, to kidnap Bill #XXXII, XXXIII, and XXXIV. The whole thing was posted, on You Tube.

Only the Army would mount a military operation, to kidnap a goat.  Only the Navy would contact the Pentagon, to get him back.

The Philadelphia Quartermaster Depot decided in 1899, that Army needed a mascot. Army Mules have a long history going back to George Washington, “Father of the American Mule“.  The first was a white mule, used to haul an ice wagon.   Virginia pack mule “Mr. Jackson” (named for “Stonewall”) became the first “official” mascot, in 1936.

Mr. Jackson served twelve years, the first of seventeen Army mules. Only one, “Buckshot”, was a female.  The “Mule Corps” currently consists of two Percheron crosses:  “Ranger III” and his half-brother “Stryker” and a half-thoroughbred called “Paladin”.

Always the last regular-season game in Division I-A football, the next two Army-Navy games are scheduled in Philadelphia. The game will then move to Metlife Stadium in East Rutherford New Jersey, to mark the twenty-year anniversary of the Islamist terror attacks on the World Trade Center. The 2022 game moves back to Philadelphia, marking the 91st time Army and Navy have played there.

To date, Navy leads Army in the series 60-49-7, with the Black Knights ending Navy’s 14-game winning streak in 2016. The 2019 edition is scheduled for December 14, at Lincoln Financial Field.

As the brother, son and grandson of Army veterans going back to the Revolution and beyond, have no doubt who I’ll be rooting for.  ‘Beat Navy’.