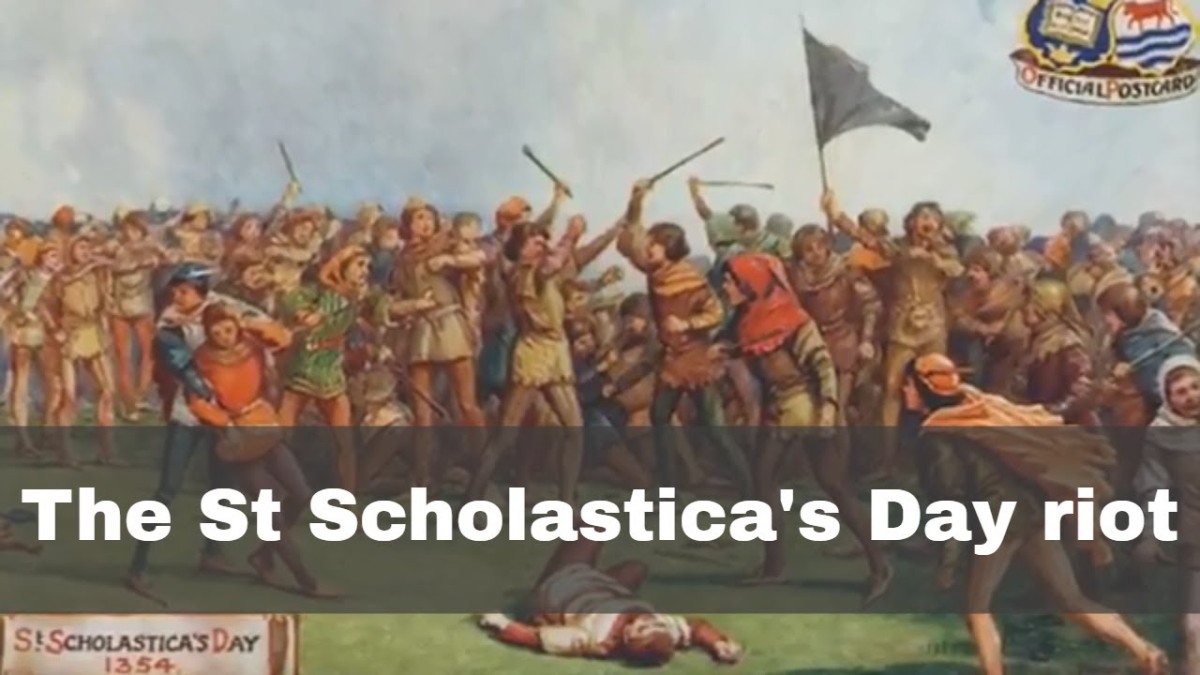 If you’re ever in Oxford, England, stop and see the four-way road junction called  “Carfax”.  The name derives from the Latin “quadrifurcus” via the French “carrefour”, meaning, “crossroads”.  Here at the center of the oldest college town in the English-speaking world, you’ll find a branch of the Santander Bank. It’s not the sort of place you’d expect a bar fight, leading to a riot.

Except, yeah. It is. Or at least it was.

In the year 1355, the future bank branch was home to the Swindlestock Tavern, built in 1250. Tuesday, February 10 was a day of celebration, a remembrance of Saint Scholastica, the Roman Catholic Saint and twin sister to Saint Benedict, leader of monks.

A group of priests and students were drinking that night, when someone complained about the wine. Two students, Walter Spryngeheuse and Roger de Chesterfield had words with the tavern keeper, John Croidon.  John responded to their complaints with “stubborn and saucy language” (I love that), whereupon someone hurled a quart pot of the stuff, at his head.  Spryngeheuse and Chesterfield then proceeded to beat up the bartender.

To talk to the locals in any modern college town, is to hear the story of a mixed blessing. Sure there are jobs, and the business is good, just as sure as there is traffic, congestion and the annual invasion, of the Other. The once quiet town becomes the over-crowded scene of rowdy weekends, beer cans and thumping bass. Plato probably experienced the same adversarial relationship or something like it (presumably minus the bass) in 387BC, with the first Academy outside the walls of Athens.

Seems like some things don’t change, all that much.

Back to the Swindlestock Tavern. The riot about to happen, was far from the first.  The thirteenth century had seen a number contretemps between “Towns and Gowns”, in which ninety people were killed.

The landlord at the Swindlestock was John de Bereford, who just happened to be the Mayor of Oxford.  On the following day, Mayor de Bereford asked University Chancellor Humphrey de Cherlton, to arrest the two students.   Some two hundred undergraduates rushed to Spryngeheuse and Chesterfield’s defense, allegedly assaulting the Mayor, and several others.

The Church bells rang out at St Martin’s, calling the townspeople to arms. The University Church bells at rang in response at St. Mary’s, summoning hordes of students.  What started out with a bar fight the night before, was about to become an all-out riot.

The Mayor rode to Woodstock to enlist the help of the King.  Back in Oxford, the violence went on for two days, coming to an end on Thursday, February 12.

Townspeople broke into academic halls, beating students and faculty, alike.  By the time it was over, Sixty-three academics and thirty locals, were dead.

The dispute leading to the St. Scholasta’s day riot of 1355 was eventually settled in favor of the University.  The Mayor and the Bailiffs of Oxford were ordered to do penance along with a number of townsfolk, one for each of the slain.  The procession would march bare-headed through the streets of Oxford before attending Mass in memory of the slain.  Then on to the University Church of Saint Mary the Virgin, where the Vice-Chancellor awaited with the Vicar, University Proctors, and the Registrar.  The University delegation was then paid a fine of 5 shillings, three-pence, usually in small coin. A penny for every scholar killed.

This act of contrition continued every February 10 for 470 years until 1825, when the mayor refused to participate.

The proverbial hatchet was finally buried on February 10, 1955. A ceremony was held in which the Mayor received an honorary degree, in exchange for which the Vice-Chancellor was made an Honorary Freeman.

It was six-hundred years, to the day. Talk about remembering your history.