It didn’t last forever but, for one golden moment in history, the goons and the government were playing for the same side. 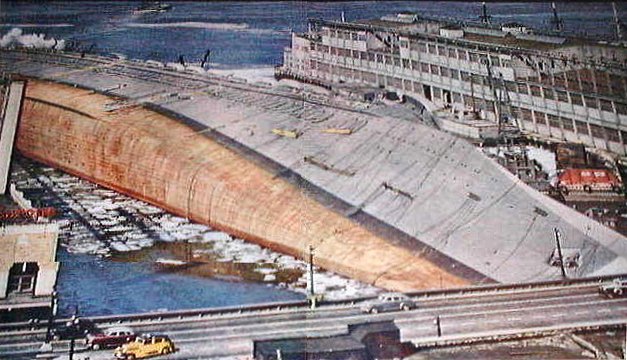 As the Great War gave way to the Roaring Twenties, operators of the great ocean-going liners began to look at a new class of vessels.

The White Star Lines’ Britannic, Olympic and the doomed Titanic. Cunard’s Carpathia, Mauretania and the ill-fated Lusitania. The Red Star Line’s Finland, Kroonland, and Lapland. These were the veterans of the trans-Atlantic trade, built around enormous numbers of immigrants and the one-way steerage class voyage from Europe, to the United States.

As the US all but shut down immigration in the early 1920s, the shipping industry looked to a new class of super liner to serve an upper-crust tourist trade, particularly Americans traveling to Europe, to escape Prohibition.

The German-built Norddeutscher Lloyd company was first off the line with the SS Bremen and Europa. The British-made RMS Queen Mary was not far behind, but the Queen of this new class of super-liner, was the French-built Normandie.

SS Normandie was one-of-a-kind.  The first vessel laid in compliance with the 1929 SOLAS Convention (Safety of Life at Sea), she was enormous.  1,029-feet long and 119-feet wide and displacing 85,000 tons, she was the largest liner in the world. 1,975 berths offering seven classes of service, served by a crew of 1,300.

Despite worldwide depression, Normandie was launched in 1932, making her first Atlantic crossing, in 1935.

War broke out in Europe in 1939.  When France surrendered to Nazi Germany in June 1940, Normandie was tied to a dock, in New York.  Under no circumstance would such a vessel be allowed to fall into Nazi hands.  SS Normandie was immediately placed under “protective custody” by the US Navy.

Work began within weeks on the renamed USS Lafayette.

The afternoon of February 9, 1942 was cold and clear, over the West 49th Street pier. Welder Clement Derrick was removing the last of four stanchions in the Grand Salon when sparks ignited bales of burlap, covering highly flammable life vests.

Within a half-hour, much of the great liner was engulfed in flames. Black, oily smoke filled the City skyline as spectators crowded Pier 88.

Squadrons of fire boats poured a deluge of water, more than the great liner could bear. Mayor Fiorello LaGuardia and Rear Admiral Adolphus Andrews attempted to board when she suddenly lurched several feet, to port. USS Lafayette was drowning in the water, meant to save her life.

The scene was a carnival, with food vendors and  hawkers. Skycraper windows were opened, to watch the grim spectacle.

USS Lafayette continued her slow roll as, unseen within her holds, shifting water picked up speed. In twelve hours, it was over. At 2:35am on February 10, she rolled over and died.

Miki Rosen was five at the time, coming by in the family car, to gawk at the scene: “My father wanted us to see it because it was an historical event. I was terribly frightened by this enormous thing that I knew was supposed to be upright and bobbing up and down. It didn’t even look like a ship. It was a mass of iron floating in the water.”

It wasn’t long before speculation turned to certainty. Sabotage. German spies were all over the waterfront, taking jobs as bartenders, stevedores and factory workers. Only a month earlier, 33 German agents were sentenced in a Brooklyn courtroom, to 300 years.  German U-Boats sank 20 allied vessels in January alone, a mere sixty miles off the New Jersey and Long Island shore.

BBC broadcaster Alistaire Cooke, “the Twentieth Century’s de Tocqueville”, spoke of American seamen, torpedoed and picked up by a German submarine. The U-Boat commander came in and asked, in a perfect Brooklyn accent, if any were from the borough. “Maybe I worked with some o’ youse guys.  I was twelve years in the Brooklyn Navy Yard.”

The FBI recreated Clement Derrick’s accident with the same dreadful result but, no matter.  By then, speculation had turned to “fact”.

Naval intelligence distrusted the official FBI version.  Hordes of uniformed personnel descended on the waterfront from Connecticut to New Jersey, to be met with a glowering brick wall of silence.  This was a rough and unaccustomed place, an underworld of sailors and gangsters,  fishermen and longshoremen.  A world of street toughs who’d long since lost any trust in uniforms, from meter maids to police officers.  Ivy-league Naval intelligence types got no information whatsoever.  Many were lucky, to escape without a beating.

The only authority in this world, was the Mob.

Naval Intelligence Director Rear Admiral Carl Espe remembered:  “The outcome of the war appeared extremely grave. In addition, there was the most serious concern over possible sabotage in the ports. It was necessary to use every possible means to prevent and forestall sabotage….” Someone on the docks was feeding the Nazis information, and only the mob had the power to hunt down the guilty party.  Policy makers fretted about doing business with the Mafia, while the Kriegsmarine U-Boats enjoyed the “Happy Time”.

Could the Mafia even be trusted?  Vito Genovese fled New York to Italy back in 1937 to avoid a murder prosecution, where he became close friends with Fascist dictator, Benito Mussolini. So tight were the pair that the cagey gangster dispatched hit men to New York to murder newspaperman Carlo Tresca, a vocal critic of the fascist regime.

Closer examination told a different story. Genovese was an opportunist, a double-crosser with no loyalty.  Most Sicilian gangsters were different, most of them refugees from savage Italian purges where Mafiosi were machine gunned, bombed and arrested, in droves. Thugs and gangsters yes, but almost to a man they hated the fascists with the white heat, of a thousand suns.

So it was, the United States Navy entered into one of the strangest relationships of WW2, an operation which would remain secret, until 1977. “Operation Underworld“.

The first mob boss to come on board was Joseph “Socks” Lanza, a hulking bulldozer of a man and undisputed lord of the Fulton fish market. Socks got his name because he’d “sock” anyone in the jaw, who disagreed with his pronouncements. A man with a criminal history going back to 1917, Joe Socks could order the fishing fleet from Maine to Florida to dump an entire catch to inflate prices, with a nod of his head. Fishermen failing to bribe the racketeer found their fish left rotting, on the docks. Continued disobedience resulted in arson, beatings, and death.

If anyone could ferret out a Judas passing information to German intelligence it was Joe Socks, but how to contact a gangster, sworn to the code of Omerta?

Head of the New York Rackets Bureau, Murray Gurfein and Office of Naval Intelligence (ONI) Commander Charles Radcliffe Haffenden met with Lanza in the office of the gangster’s attorney. Gurfein explained “It’s a matter of great urgency. Many of our ships are being sunk along the Atlantic coast. We suspect German U-boats are being refueled and getting fresh supplies off our coast …You can find out how and where the submarines are being refueled.”  Surprisingly, the Gangster jumped at the opportunity.

Important as it was, Lanza’s fishing fleet wasn’t enough, and Socks himself was disliked by the other four New York crime families.

The never-ending scrum of troop ships and merchant vessels crowding the New York waterfront was of life-and-death importance to the allied war effort. The only man who controlled it all, was in prison. Lucky Luciano.  The only man Luciano trusted, was the Jewish gangster, Meyer Lansky.

Unlike the Italians, no one questioned Lansky’s patriotism.  He and his Jewish mob had attacked Nazi meetings all over the city, throwing some of them out of the windows.

The meeting was arranged and, on May 12, 1942, Luciano was quietly transferred from Dannemora prison to a country club by comparison, and promised parole at the war’s end. This in exchange for the mobster’s cooperation in defeating Nazi Germany.

Cooperate, he did. The word went out from Luciano’s prison cell, from the docks to the heart of the city. Soon, every hat check girl and bartender, every longshoreman and numbers runner and the guys who serviced the vending machines, became the eyes and ears of the United States Navy. From bathroom attendants to elevator operators, the American Nazi organization known as German American Bund couldn’t so much as think out loud, without someone listening in.

It didn’t last forever but, for one golden moment in history, the goons and the government were playing for the same side.

In the end, USS Lafayette would never sail under a US Flag.  She was a total loss, sold for scrap in 1946.  The government was as good as its word. On January 3, 1946, Governor Thomas E. Dewey commuted Luciano’s sentence, on condition that he did not resist deportation. The most powerful mob boss in New York, Charles “Lucky” Luciano, was deported to Naples.  Four years to the day from the death of the USS Lafayette.