The naval bombardment taking place that night, is scarcely to be imagined. At first exchanging shot for shot with the garrison the warships soon pulled back, out of range of the fort’s guns. For 27 hours in a driving rain, nineteen warships pounded shot, shell and rocket by the thousands onto the 1,000-man garrison. 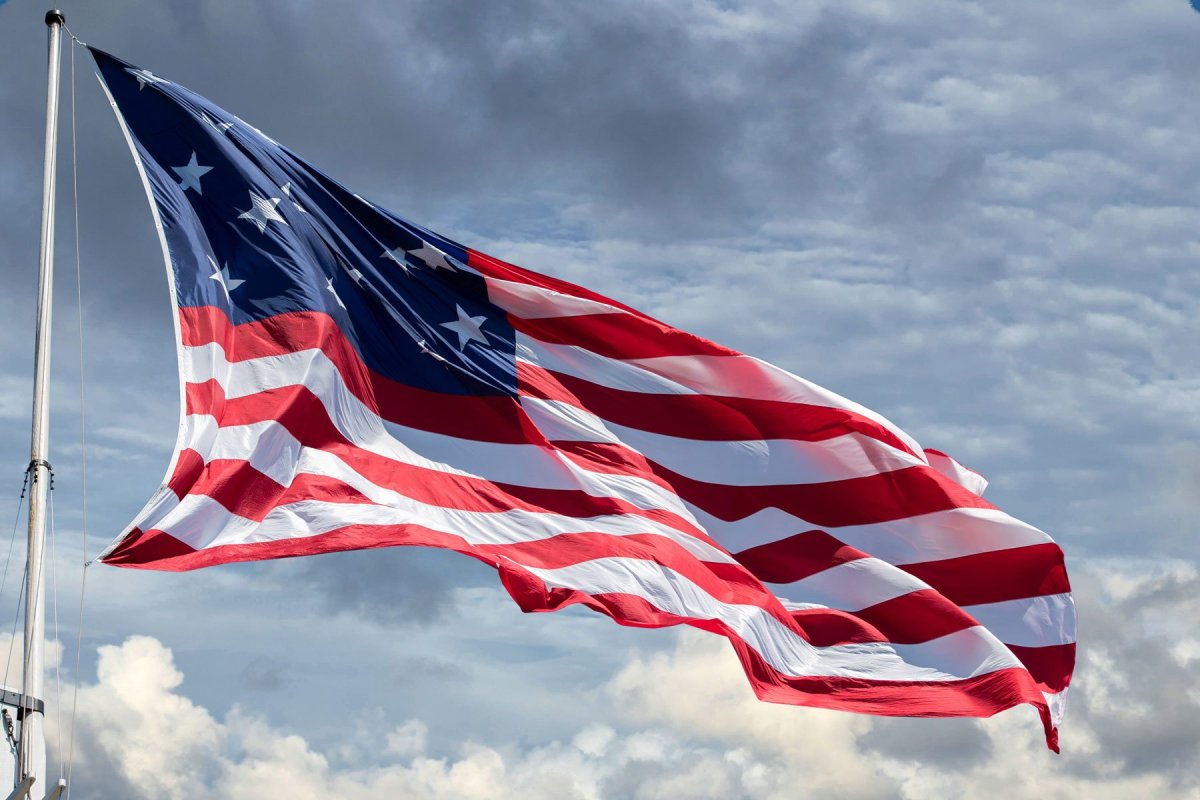 3,000 years ago, the Greek poet Anacreon composed lyric verse intended to be recited or sung to musical accompaniment, usually that of the lyre.

Today, Anacreon himself is all but unknown, save for the efforts of the Anacreontic Society of 18th century, Great Britain.

The English composer and church organist John Stafford Smith founded the Anacreontic Society somewhere around 1766, the group meeting in various taverns before settling on the old coffee house on Ludgate Hill, in London. A gentlemen’s club of amateur musicians and professionals meeting monthly and dedicating themselves to “wit, harmony and the god of wine”, the society presented regular concerts, the high point of which came in January 1791 with the attendance the Austrian composer, Joseph Haydn.

The low point came somewhere in 1792 when the Duchess of Devonshire attended a meeting and found the entertainments, displeasing to the fairer sex. That October it was reported, “The Anacreontick Society meets no more; it has long been struggling with symptoms of internal decay“.

Success has many fathers but failure, is an orphan. Today the Anacreontic Society itself is all but forgotten but for the theme song written by society member and lyricist Ralph Tomlinson and put to music by John Smith, remembered by the first four words: “To Anacreon in Heaven“.

From the first signs of discontent in the American colonies to the dissolution of the Articles of Confederation and adoption of our own modern constitution, the life of the Anacreontic Society tracks with the British colonies in North America’s struggle for independence.

Within a decade of that constitution the rise of a certain Corsican corporal embroiled Great Britain in a series of international coalitions against the forces of Napoleon Bonaparte and his Grande Armée. The former American colonies benefited from the European conflict, remaining on the sidelines and doing business with (while earning the animosity of) both sides.

Anachronistic to that collection of agreements both written and unwritten which together comprise the Constitution of the United Kingdom, the practice of Impressment traces back to the time of Edward Longshanks the Hammer of the Scots, King of England between 1272 to 1307. Naval service imposed massive manpower requirements in the age of sail. Several European navies employed the use of “press gangs” to forcibly “impress” (read, kidnap) the unsuspecting into terms of service at sea though the dominance of the British navy largely associates the practice, with that of the United Kingdom.

Widely detested on both sides of the Atlantic, the practice nevertheless survived a number of court challenges. Impressment of American sailors appears in the Declaration of Independence, along with 26 other grievances against King George III. While not entirely the cause of the War of 1812, impressment remained one among a number, of casus belli.

Neither side was ready for it when war broke out between the United States and the United Kingdom in June, 1812. Most of the British war machine was busy with that “Little Corporal”, whose “Waterloo” remained, two years in the future.  America had disbanded the National Bank by that time and had no means of paying for war, while private northeastern bankers were reluctant to provide financing.

New England may have actually seceded following the Hartford Convention of 1814 if not for future President Andrew Jackson’s overwhelming victory at the Battle of New Orleans. A battle I might add took place after the treaty of Ghent formally ending the war, but now I’m getting ahead of the story.

Like nearly everyone else in Baltimore, Fort McHenry commander Major George Armistead expected an attack, on the port city. Never one to run away from a fight Armistead wanted “a flag so large that the British will have no difficulty in seeing it from a distance.”

In July of 1813, Armistead ordered an enormous garrison flag measuring 30 x 42-feet and a smaller storm flag of 17 x 25 feet.  The job went to a 37-year-old widow and seamstress named Mary Pickersgill.

Today the flag contains 50 stars, one for each state in the union and 13 stripes representing each of the original colonies. It was the practice in 1813 to add a star and a stripe for every state. In Mary’s time, there were 15 of each.

Using over 400 yards of hand-dyed fabric she fashioned white stars two feet across on a blue canton with stripes measuring two feet tall and assembled it all on the main floor, of a nearby brewery.

Such a project is beyond the abilities of a single seamstress. Mary enlisted the aid of her 13-year-old daughter Caroline, two nieces, 13-year-old Eliza Young and 15-year-old Margaret Young and a 13-year-old African-American girl named Grace Wisher indentured to her by her mother Jenny for a period of six years. Some sources report that Jenny Wisher, a free black woman, helped out.

Mary received $405.90 for the larger flag and $168.54 for the smaller. She was given 6 to 8 weeks in which to finish the commission, the largest one of her career. She completed the job in seven, delivering the two flags on August 19, 1813. Thirteen months later Mary Pickersgill, her flags and the team of women who helped her, took their place in American history.

This most unpopular of wars became even more so, following the sack of Washington and burning of the United States Capitol and the White House, in August, 1814. Major General Robert Ross’ men were met on this occasion by an inexperienced and poorly equipped militia of some 6,000 American forces at Bladensburg, Maryland, whose comprehensive defeat and humiliating rout went into the history books as the “Bladensburg Races”.

A month later the force facing General Ross’ 4,700 troops landing at North Point were not that hastily assembled collection of Maryland and DC militia routed at Bladensburg, but a thoroughly prepared force led by Brigadier General John Stricker, dug in across a narrows bristling with small arms and a battery of six 4-pounder field guns and flanked by tidal creeks, all but nullifying the invaders’ numerical advantage.

General Ross himself was shot in the engagement and mortally wounded, leaving British forces in confusion as the Americans affected a strategic retreat. While a tactical victory for the British side, the delay bought the Americans precious time in which to strengthen the defense.

The following day British troops encountered a massive force of some 10,000 men and 100 cannon astride the Philadelphia Road blocking the advance, on Baltimore. Invading forces were at a two-to-one, disadvantage and in need of naval support to dislodge American ground forces. There would be no advance on Baltimore harbor while Fort McHenry, remained in American hands. Fort McHenry had to be taken.

A lawyer and amateur poet called Francis Scott Key was on-hand at the time, a prisoner exchange negotiator along with Colonel John Stuart Skinner, dining as guests aboard the HMS Tonnant. The two had an inside view of British naval capabilities in the harbor and were held, pending the outcome of the battle.

So it is this Baltimore lawyer had a front row seat, as that battered storm flag disappeared in the twilight’s last gleaming.

The naval bombardment taking place that night, is scarcely to be imagined. At first exchanging shot for shot with the garrison the warships soon pulled back, out of range of the fort’s guns. For 27 hours in a driving rain, nineteen warships pounded shot, shell and rocket by the thousands onto the 1,000-man garrison.

Sometime during the night that battered storm banner was taken down and replaced by the garrison flag. By the dawn’s early light of September 14 This was the banner, which now came into view. Nineteen warships had taken their best shot and yet, the garrison held. Key was so moved by the sight he dashed out a few lines on the back of an envelope. He called his poem, Defence of Fort M’Henry.

Without Fort McHenry in British hands there would be no occupation of Baltimore harbor, no assault upon the city. Colonel Arthur Brooke’s forces were withdrawn, by September 15. Vice Admiral Sir Alexander Cochrane sailed for New Orleans to regroup for the next, and last, battle of the War of 1812.

It was Key’s brother-in law Joseph H. Nicholson who first noticed the words fit nicely, with the popular melody of “The Anacreontic Song”. The Baltimore Patriot and The American printed the song on September 20 with the note “Tune: Anacreon in Heaven”. A short time later Thomas Carr of the Carr Music Store in Baltimore published words and music together under the title “The Star Spangled Banner”.

The song grew in popularity throughout the 19th century to be played at 4th of July celebrations, military ceremonies and other patriotic occasions. By World War 1 many of the more stridently anti-British verses had been removed from sheet music to avoid giving offense, to our British allies.

The anthem was played during the 7th inning stretch of game one of the 1918 World Series, believed to be the first time the song appeared, at a baseball game. Six legislative attempts came and went during the 1920s, to make Star Spangled Banner the national anthem of the United States. In the end a petition from the Veterans of Foreign Wars did the job. President Herbert Hoover signed the bill into law on March 4, 1931.

While all four verses are included according to United States code, the last three are all but unknown today and rarely sung, if at all.

Long may it wave.

O! say can you see, by the dawn’s early light,
What so proudly we hail’d at the twilight’s last gleaming,
Whose broad stripes and bright stars through the perilous fight,
O’er the ramparts we watch’d, were so gallantly streaming?
And the rockets’ red glare, the bombs bursting in air,
Gave proof through the night that our flag was still there —
O! say, does that star-spangled banner yet wave
O’er the land of the free, and the home of the brave?

On the shore, dimly seen through the mists of the deep,
Where the foe’s haughty host in dread silence reposes,
What is that which the breeze o’er the towering steep,
As it fitfully blows, half conceals, half discloses?
Now it catches the gleam of the morning’s first beam,
In full glory reflected now shines on the stream —
‘Tis the star-spangled banner, O! long may it wave
O’er the land of the free, and the home of the brave.

And where is that band who so vauntingly swore
That the havock of war and the battle’s confusion
A home and a country should leave us no more?
Their blood has wash’d out their foul foot-steps’ pollution,
No refuge could save the hireling and slave,
From the terror of flight or the gloom of the grave;
And the star-spangled banner in triumph doth wave
O’er the land of the free, and the home of the brave.

O! thus be it ever when freemen shall stand
Between their lov’d home, and the war’s desolation,
Blest with vict’ry and peace, may the heav’n-rescued land
Praise the power that hath made and preserv’d us a nation!
Then conquer we must, when our cause it is just,
And this be our motto — “In God is our trust!”
And the star-spangled banner in triumph shall wave
O’er the land of the free, and the home of the brave.