Around 1523, the Florentine navigator Giovanni da Verrazzano convinced the French King Francis I to fund an expedition to find a western water route to “Cathay” (China).  Some of the earliest French presence in the New World began ten years later, with Jacques Cartier’s exploration of the Gulf of St. Lawrence in present-day Canada. In 1534, Cartier planted his flag on the Gaspé Peninsula in present-day Quebec City, claiming the territory in the name of Francis I.

The first French settlement was attempted in 1541 when some 400 individuals put down in Fort Charlesbourg-Royal. That effort would come to an end two years later but, there would be others.

As early English colonists to North America struggled to put down roots in places like Roanoke and Jamestown, the Spanish developed toeholds in Florida and the American southwest. To the north, French fishing fleets sailed the Atlantic coast and into the St. Lawrence waterways, making alliances with Canadian First Nations and developing a rich trade in furs, particularly beaver, which were at that time becoming rare in Europe.

By its peak in 1712, the territory of Nouvelle-France (New France) consisted of five colonies, stretching from Canada to the Gulf of Mexico, and from Newfoundland to the Great Lakes. 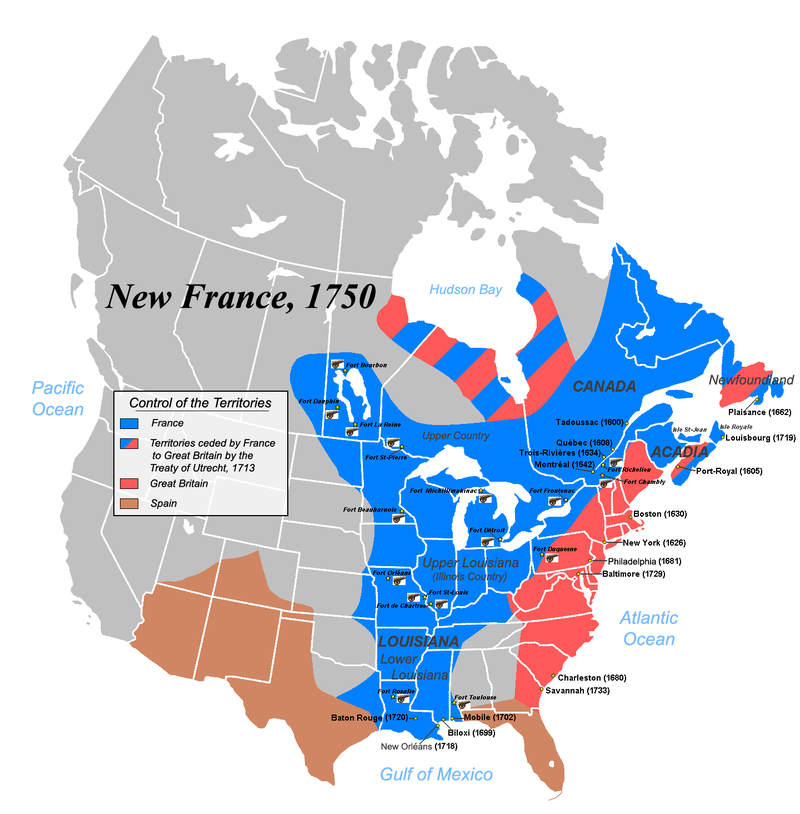 English settlers developed a farming economy, and men brought wives and families along, from the earliest days. Not so French settlers.  New France was a man’s world, a world of soldiers and fur traders, of missionaries, sailors and fishermen. A world with little to offer women.

Well into the 17th century, a great number of marriageable males would return to France following three-year terms of service.  If there was to be permanent French settlement in the New World, that would have to change.

In the thirty years beginning in 1634, private individuals and religious groups recruited a mere 262 filles à marier (marriageable girls) between Québec and Montréal, an area with some 2,500 men.

Marguerite Bourgeoy set sail for the New World in 1653 aboard the Saint-Nicholas, along with another hundred or so colonists. There Bourgeoys lived in Fort Ville-Marie (now Montreal) where she educated young girls, the poor, and the native population.  Bourgeoys developed one of the first uncloistered religious communities in the Catholic Church and went on to found the Congregation of Notre Dame of Montreal.

Today, Bourgeoy  is a Saint of the Roman Catholic Church. It was she who first used the term filles du roi (King’s Daughters).

The term “King’s Daughters” referred not to parentage, but to sponsorship. In 1663, King Louis XIV took over direct control of governing New France, and initiated a system for recruiting and transporting marriageable women into the colony.

Recruiting took place in the northern cities, carried out by merchants and ship’s outfitters. Each girl was expected to be of appropriate age for giving birth, and to present a birth certificate and recommendation from her parish priest or local magistrate, stating that she was free to marry.

Each girl was equipped with an assortment of practical items: a coiffe, bonnet, taffeta handkerchief, pair of stockings, pair of gloves, ribbon, four shoelaces, white thread, 100 needles, 1,000 pins, a comb, pair of scissors, two knives and two livres in cash along with suitable clothing and a few provisions.  The cost including passage came to 100 livres, equivalent to $1,425 in the year 2000, a cost which was paid by the French state.

It quickly emerged that city girls were too “lightheaded and lazy”. Good, strong peasant stock was needed. Marie de l’Incarnation, mother superior of the Ursuline convent at Québec City requested in 1668: “From now on, we only want to ask for village girls who are as fit for work as men, experience having shown that those who are not raised [in the country] are not fit for this country.”

In the following ten years, 800 young French women immigrated to New France under the filles du roi program, sponsored by King Louis XIV and his colonial advisors.  Unsurprisingly, Canada experienced a baby boom, such as never seen before, or since.  The average family had five children during this period, about twice as many as the “Baby Boom”, following WW2.   Families with more than 10 children got a bonus from the Crown:  an additional annual pension of 300 livres ($6,000).

According the Canadian Broadcasting Corporation (CBC), two-thirds of modern French Canadians can trace their lineage back to one of those 800 women, including Hillary Clinton, Madonna and Angelina Jolie.