Precise identification of the Beast of Gévaudan has baffled cryptozoologists, from that day to this.

In the summer of 1764, a young woman was tending cattle near the Mercoire forest in the Gévaudan region of south-central France, when a large animal emerged from the forest.    She later described the creature as wolf-like in appearance, but much larger.  The size of a calf, or a donkey.

Twice the animal attacked, only to be driven off by the bulls in the herd.  Twenty-nine days later, Janne Boule was not so lucky. The 14-year-old is officially recorded as the first victim of La Bête du Gévaudan.  The “Beast of Gévaudan”. Over the following three years, there would be many more.

Contemporary illustration depicts the Beast as a large wolf, or wolf hybrid.

A 1987 study of contemporary sources estimates 210 such attacks over the three-year period, resulting in 113 fatalities and another 49 injuries. Victims were most often killed, by having their throats ripped out. Ninety-eight of those, were partially eaten.

Precise identification of the Beast of Gévaudan has baffled cryptozoologists, from that day to this.  Eyewitness accounts describe a large animal with a long tail, about the size of a calf, or a donkey. With reddish fur and a flat head, the Beast was said to be exceptionally powerful, able to leap distances of 30-feet and more, and capable of carrying off a grown adult, in its jaws.

Terror gripped the region in the later months of 1764, as the Beast attacked women, men and children.  Usually while alone, and often while tending livestock.

Suspicion centered on an unusually large wolf, dog, or some hybrid combination of the two.   Stories went to the supernatural, laying bare our most primordial fear, that of a shape shifter. A Werewolf.

The Epic of Gilgamesh comes to us from the second millennium BC, telling the tale of such creatures. The 1st-century BC Roman poet Ovid, was the first to write of shape-shifting as a conscious act of will. 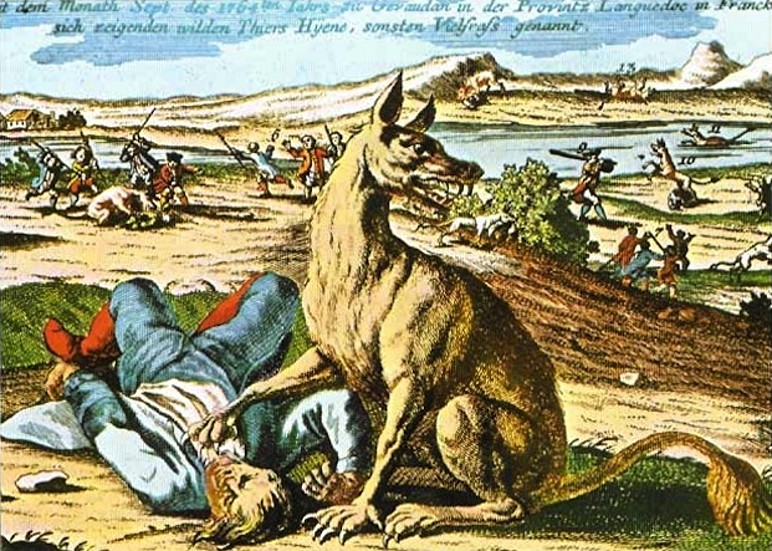 In January 1765, the Beast came to the attention of King Louis XV, who decreed that the French state would help to find and destroy the Beast. First captain Duhamel of the Clermont-Ferrand dragoons was brought out with his troops, and sent to Le Gévaudan. The professional wolf-hunters Jean Charles Marc Antoine Vaumesle d’Enneval and his son Jean-François, arrived with eight bloodhounds, trained in wolf-hunting.

“Officer of the Royal Bedchamber” Antoine De Beauterne Marques Argents, Knight Equerry of the Royal Military Order of Saint Louis and Gun-Bearer to Louis XV of France (now, there’s a title) announced on this day in 1765 that he had killed the Beast of Gévaudan, to great rejoicing.

The animal was a large grey wolf measuring 5-feet, 7-inches and weighing 130-pounds. Eyewitnesses claimed to have recognized scars on the animal’s body and Beauterne himself swore that this was the Beast. “We declare by the present report signed from our hand”, he said, “we never saw a big wolf that could be compared to this one. Hence, we believe this could be the fearsome beast that caused so much damage.”

The animal was stuffed and brought to Versailles, but the joy was short-lived.

Two boys were attacked on December 2 but managed to fight off the Beast.  A dozen more fatal attacks were reported to have followed, near La Besseyre-Saint-Mary.

The animal disappeared around the middle of 1767.  It is believed to have been shot a dozen or more times by this time, and poison baits were widespread.  A local farmer and inn-keeper named Jean Chastel is credited with killing the Beast of Gévaudan on June 19, 1767, with a bullet which he himself had cast, in silver.

The silver bullet meme did much to feed into werewolf mythology. Chastel himself is depicted as a werewolf in Patricia Briggs’ novel, Hunting Ground.  Here, the hunter and the hunted are one and the same, and some random wolf was shot, to throw everyone off the scent. 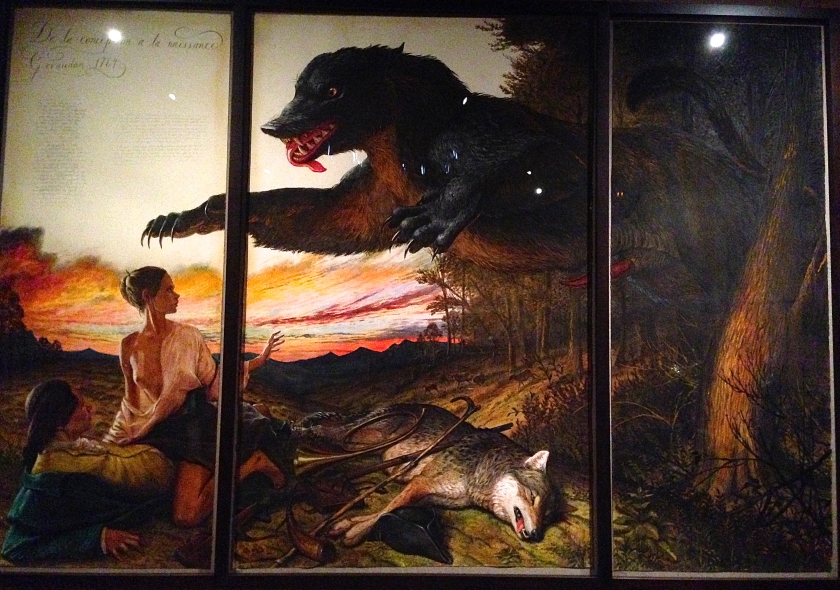 National Geographic posits that the Beast of Gévaudan was in fact, a subadult male lion. African lions were by no means unknown at this place and time, though images of the era were usually quite stylized, depicting the full mane of the adult male.

Exotic animal menageries were common among the upper classes. It is quite possible that such an animal could’ve been on the loose.  Physical descriptions of the Beast including it’s reddish hair, flat head and furry ridge-line, match up with those of such an animal.  This combined with descriptions of the hunting and killing methods of the animal, make the lion theory quite plausible.

The Beast of Gévaudan may have been a wolf, or maybe a lion.  Perhaps it was several animals.  Or maybe Jean Chastel is a werewolf, after all.  A clever one who threw half a nation off his scent, and now only does his killing, in the dark.  Just another thing that goes BUMP, in the night.