For every multi-ton flying fuel tank hurtling from bow-mounted catapults bristling with armaments, a controlled crash landing of that same aircraft, takes place in the stern. Combine all that chaos with a heaping helping of Murphy’s law and the table is set, for disaster. 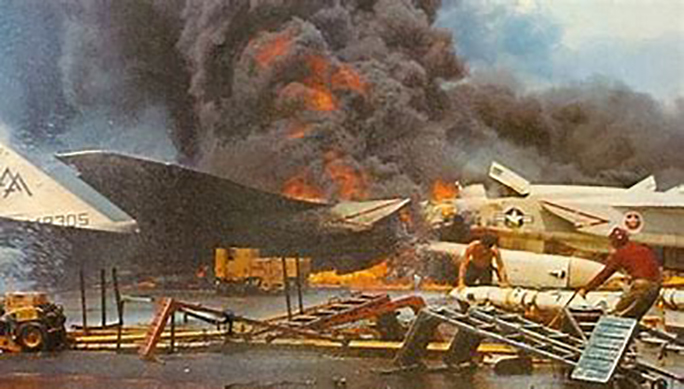 From the WW1-era launch of the first modern aircraft carrier to the present day, the carrier sailor has literally lived and worked, surrounded by the means of his own destruction.

In March 1953, a Corsair fighter off the coast of Korea landed on the decks of USS Oriskany, with a bomb still attached. The thing fell off and exploded, piercing the wingtip tanks of several F9F-5 Panthers, spilling flaming fuel across the decks. That time, fire crews were able to put out the fire, before the flames reached ordnance lockers. Loss of life was limited to two sailors killed and another fifteen, wounded. A decade later, the “Mighty O” wouldn’t get off, so lightly.

Oriskany began her second tour off the Vietnam coast in July, 1966. The carrier’s five fighter squadrons launched nearly 8,000 sorties in the first four months, a pace taxing to man and machine, alike.

On October 26, apprentice seamen George James, 18, and James Sider, 17, were ordered to stow 117 parachute flares. Untrained and unsupervised, Sider snagged a lanyard , and accidentally set one off. Panicked, blinded by the brilliant light of white phosphorus, Sider tossed the flare into the storage locker.

The bin already contained some 650 flares and 2¾-inch air-launched rockets, each carrying a 6-pound warhead. Temperatures inside the locker soared to 4,500° Fahrenheit and the main hatch exploded as steel bulkheads began to sag and buckle.

Water is worse than useless against a magnesium fire. Anyone who’s seen the Hindenburg tape understands why. Water breaks down to oxygen and hydrogen at temperatures over 3,000°, literally transforming into fuel, for the inferno.

As helicopters burned and ammunition cooked off, the courage of individual firemen is scarcely to be believed. Literally surrounded by bombs staged for loading, firemen trained water hoses to cool these monsters even as their paint blistered, and fuze inlets began to smoke.

Had the bombs gone off, the probable result would be the death of the carrier itself.

Down below, murderous heat and noxious fumes killed men where they stood. Lt. Cmdr. Marvin Reynolds wrapped a wet blanket around himself and fumbled in the darkness, for the wrench to open his porthole. “If you let this wrench slip and lose it in the smoke” he thought, “you’ve bought the farm.” Reynolds managed to open his porthole, holding his head out the small opening until a sailor passed him a breathing mask, and fire hose.

In the end, firemen could do little but hose the edge of the fire, while the inferno burned itself out. 44 men were killed and another 156, injured. So much water was pumped onboard that scuba teams were required, to rescue men trapped on lower decks.

8 months later, USS Forrestal met a similar fate. This one is personal as a close family member, was involved.

In 1967, the carrier bombing campaign against North Vietnam reached an intensity unrivaled, in US Naval history.

Combat operations were literally outpacing ordnance resupply, which soon included AN-M65A1 “Fat Boy” bombs, left over from the war in Korea.  Handlers feared these old bombs might spontaneously explode from the shock of a catapult takeoff.

Before the cruise, damage control firefighting teams were shown training films of Navy ordnance tests, demonstrating how a 1000-lb bomb could be directly exposed to a jet fuel fire for a full 10 minutes. Tests were conducted using the new Mark 83 bomb featuring a thicker, heat resistant wall compared with older munitions and “H6” explosive, designed to burn off at high temperatures, like a huge sparkler.

The problem was, the old ordnance was thinner-skinned than the modern bombs, and armed with 10+ year-old “Composition B” explosive.  Already more sensitive to heat and shock than the newer ordnance, composition B becomes more volatile as the explosive ages.  The stuff becomes more powerful too, as much as 50%, by weight.

On the morning of July 29, preparations were underway for the second strike of the day.  Twenty-seven aircraft were on deck, fully loaded with fuel, ammunition, bombs and “Zuni” unguided rockets.

An electrical malfunction fired a rocket across the flight deck, severing the arm of one crew member and piercing the 400-gallon fuel tank of an A-4E Skyhawk. The rocket’s safety mechanism prevented the weapon from exploding, but the A-4’s torn fuel tank was spewing flaming jet fuel onto the deck. Other tanks soon overheated and exploded, adding to the conflagration.

During WW2, virtually all carrier sailors were trained to fight fires. That all changed by the Vietnam era in favor of small, highly trained teams of fire fighters. Damage Control came into action immediately, as Team #8 Chief Gerald Farrier spotted a Fat Boy bomb turning cherry red, in the flames.  Without protective clothing, Farrier held a fire extinguisher on the 1000-pound bomb, hoping to keep it cool enough to prevent cooking off as his team brought the conflagration under control.

Firefighters were confident that their ten-minute window would hold, but composition B proved as unstable as the ordnance people had feared.  Farrier “simply disappeared” in the first of a dozen or more explosions, in the first few minutes.  By the third such explosion, Damage Control Team #8 had all but ceased to exist.

There were nine major explosions on deck during the first five minutes.

The port quarter of the Forrestal ceased to exist in the violence of the blasts. Office furniture was thrown to the floor, five decks below.  Huge holes were torn through the flight deck while 40,000 gallons of flaming jet fuel, poured through ventilation ducts and into living quarters below.

With the life of the carrier itself at stake, tales of incredible courage, were commonplace. Medical officers worked for hours in the most dangerous conditions imaginable. Explosive ordnance demolition officer LT(JG) Robert Cates “noticed that there was a 500-pound bomb and a 750-pound bomb in the middle of the flight deck… that were still smoking. They hadn’t detonated or anything; they were just setting there smoking. So I went up and defused them and had them jettisoned.” Sailors volunteered to be lowered through the flight decks into flaming and smoked-filled compartments, to defuse live bombs.

The fire burned until 4:00 the next morning. 21 of the 73 aircraft on board were destroyed and another 40, damaged. 134 crewmen died in the conflagration. Another 161 received non-fatal injuries. It was the worst loss of life on a US Navy vessel, since World War 2.

They say bad luck comes in threes. On this day in 1969, the nuclear carrier USS Enterprise finished the list.

Since the age of the Wright brothers, aircraft designers have often left out the excess weight of starters and batteries. Early piston engines were startd by hand and, in the jet age, gas turbines often use auxiliary starters powered by gas or other combustible material.

On the morning of January 14, 1969, USS Enterprise was training 70-miles off Hawaii, preparing for her 4th tour of Vietnam. Her flight deck was crowded with F-4 Phantoms and A-7 Corsair II bombers, each loaded with Zuni rocket pods and 500-pound Mk-82 bombs. At 8:18am, an MD-3A “Huffer” aircraft engine starter was parked near the wing of an F4 Phantom, its exhaust a mere 24-inches from a rocket pod.

The 15-pound warhead on a Zuni rocket, goes off at 358° Fahrenheit. A Huffer exhaust burns between 362° and 590°. For a minute and 18 seconds, no fewer than four crew members were aware of the problem. None took steps to fix it and each, paid the ultimate price.

In the flash of an eye the exploding rocket ruptured several nearby fuel tanks as fuel vaporized and immediately, burst into flames. That’s when all hell, broke loose. The nearest 15 aircraft carried a combined fuel load of 15,000 gallons with a combined armament of 30 500-pound bombs and 40 Zuni rockets. 18 massive explosions went off in close succession, tearing great holes in 2½-inch deck armor.

Men and machines were tossed by each explosion, “like dust”. Three bombs went off at once opening a 22-foot hole in the deck, damaging a nearby tanker and spilling burning fuel, six floors below.

Knocked unconscious in the initial blast, Petty Officer 3rd Class Frank Neumayer of Fighter Squadron VF-96 awoke to find his goggles melting and his clothing, on fire. “The roar of the fire was just horrendous,” he later said. “It just blotted out any other sound. The stench… was horrible.” He managed to crawl to the catwalk below just as 2 500-pound bombs went off, not 30-feet from his previous position. Neumayer lost his left leg in the blast and twice received last rites, but survived.

The Destroyers USS Bainbridge and Rodgers came alongside, to lend their hoses. Helicopters arrived within two hours from Pearl Harbor, to medevac the wounded. Within three hours the last flames, were out.

The USS Enterprise fire resulted in the death of 34 men and another 341 non-fatal injuries. The fire resulted in a redesign of the Huffer starter and repair costs equivalent to $912 million, today. No formal inquiry was ever held, to determine fault. Everyone plausibly to blame for the catastrophe, had been among the first to die.