Oddly, we don’t know the precise form in which the President delivered his address. Lincoln wrote his own speeches, lining out words and writing into margins as he developed his thought process. That working copy is lost. 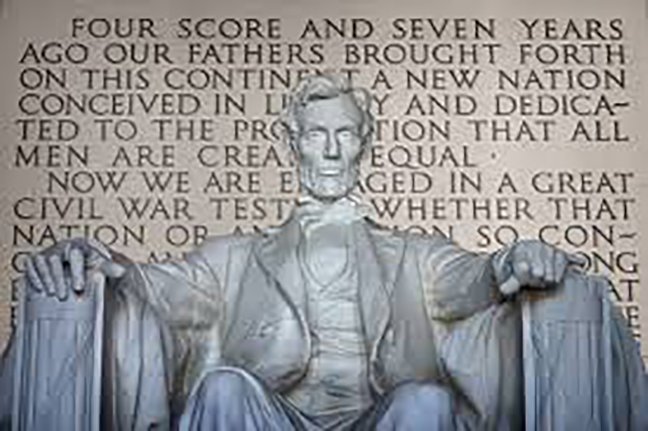 Have you ever crossed that field at Gettysburg? The site of the final assault on the third day? You can feel the sense of history, stepping off Seminary Ridge. Only a mile to go. You are awe struck at the mental image of thousands of blue clad soldiers, awaiting your advance. Halfway across and just coming into small arms range, you enter a low spot on what seemed like a flat plain. It’s almost imperceptible but the “copse of trees”, drops out of sight. You can’t help a sense of relief as you cross the draw. If you can’t see them they can’t shoot you. Right?

Then you look to your right and realize. Cannon would have been firing down the length of your lines that day, from Little Round Top. From your left, the guns of Cemetery Hill tear into your lines. Rising out of the draw you are now in full sight of Union infantry. You quicken your pace as your lines are torn apart from the front and sides. Fences hold in some spots along the Emmitsburg Road. Hundreds of your comrades are shot down in the attempt to climb over.

Finally you are over and now it’s a dead run. There’s a savage struggle to possess an angle in a stone wall, but it is not enough. The Bloody Angle. You have reached the “high water mark of the Confederacy”. The shattered remains of that splendid Multitude you joined only moments before, retreat. It is over.

The hill from which the Union center repulsed Longstreet’s assault of the third day was selected for a national cemetery, within the four months following the battle of Gettysburg. Work began to re-inter the dead from the carnage of July, on October 27.

Three weeks later, Abraham Lincoln boarded a train in Washington.  He’d been asked to make “a few dedicatory remarks” on the following day, consecrating the new National Cemetery at Gettysburg where, even now on this day in 1863, workmen yet labored.

Lincoln was the President of a country torn by Civil War, a war so terrible that, before it was over, would kill more Americans than all the wars from the Declaration of Independence to the Global War on Terror, combined.

Lincoln had been feeling poorly the day of the train ride, telling his secretary John Hay, he was feeling weak.  He would feel worse before that day was over. Hay noted that Lincoln’s face was ‘a ghastly color’, the day of the address.  No one knew it at the time. The President had entered the first stages, of smallpox.

His was not the keynote address.  That would be a 13,607 word, two-hour oration delivered by Boston politician Edward Everett.

After Everett’s speech, photographers began the careful preparation and setting, of glass plates. Each an thought he had all the time in the world. He did not.

There is no photograph of President Lincoln delivering the Gettysburg address.

The 16th President of the United States stepped to the rostrum and delivered 271 words, in ten sentences.  In just over two minutes, Lincoln captured an entire vision of where the country was at that moment in time, where it had been, and where it was going.

Lincoln himself thought his speech a flop, but Everett later wrote to him, saying “I wish that I could flatter myself that I had come as near to the central idea of the occasion in two hours as you did in two minutes.”

Then as now there were haters, a peanut gallery firing spitballs, from secure positions on the sidelines.  The Chicago Times described Lincoln’s remarks as “silly, flat and dish-watery utterances”. It all came out in the end.  Lincoln’s address is remembered as one of the finest English language orations since Henry V’s St. Crispin’s Day speech, at Agincourt.  The names of those croaking tree frogs at the Chicago Times, are all but forgotten.

Oddly, we don’t know the precise form in which the President delivered his address.  Lincoln wrote his own speeches, lining out words and writing into margins as he developed his thought process.  That working copy is lost.

There are five known copies of the Gettysburg address, written in Lincoln’s own hand. Each varies slightly in wording and punctuation.  He wrote two after the address, giving them to his two personal secretaries, John Hay and John Nicolay.  He sent one to Edward Everett early in 1864 and another to George Bancroft, the former Secretary of the Navy turned historian.  Lincoln wrote a fifth copy in February known as the Bliss copy, for Colonel Alexander Bliss, upon learning the Bancroft version was unsuitable for publication. Preproduction technologies were unsuitable at that time, for documents written on both sides of the same page.

Lincoln signed, dated and titled the Bliss copy.  This is the version inscribed on the South wall of the Lincoln Memorial.

One of my stranger childhood notions, was the idea that sounds never disappeared. They only diminished as they spread outward, like ripples on a pond.  If that was true (thought my nine-year-old self), could we not somehow capture and listen to the Gettysburg address, as it was actually delivered?

It’s a funny thing how some ideas, even the goofy ones, never completely die away.