Suetonius described the complex as “ruinously prodigal”.  Nero himself would say nothing further on the palace’s dedication, save to say that he “had at last begun to live like a human being”. 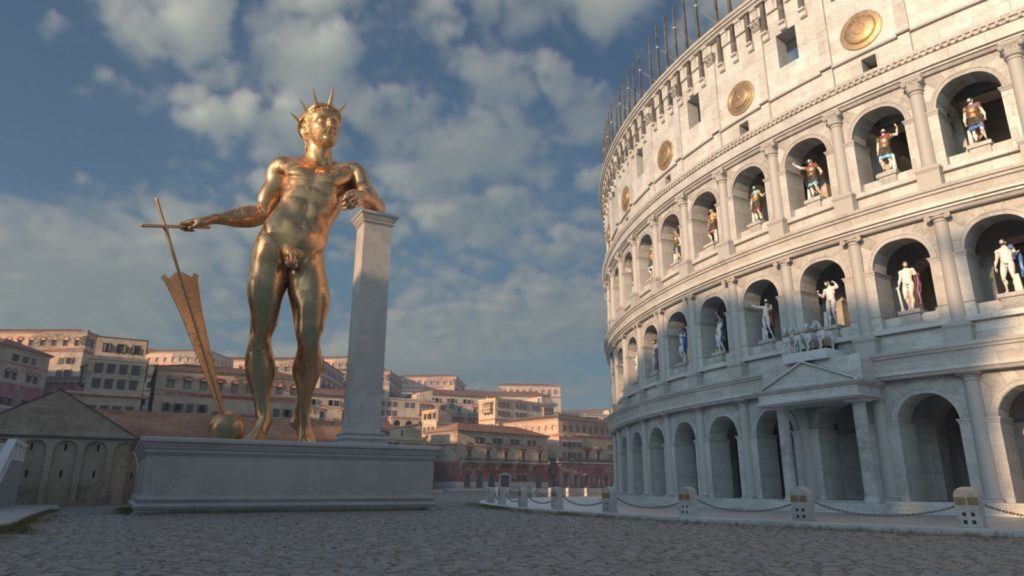 A story comes down to us from two thousand years.  A tale of Emperor Nero, playing the fiddle while Rome burned.

Far be it for me to leap to the defense of a man who ordered the murder of his own wife and mother, except in the name of historical accuracy. The viol class of musical instruments to which the fiddle belongs, didn’t come along until the 11th century. If Nero played anything it was probably a Cithara, a heavy wooden instrument with four to seven strings.

No fewer than five versions come down to us about the Great Fire of 64AD, and the Emperor’s role in it. The Roman historian Tacitus tells us that Nero sang about the fall of Troy while the city burned, but admits to having no witnesses.

Cassius Dio and Suetonius ask us to believe, each in their turn, that Nero secretly sent guys out to burn the city, or, openly did so and watched from the tower of Maecenas while singing and playing the lyre, or, the fire was started by an obscure religious sect called “Christians”, or, Nero sent his guys out after all, but sang and played his lyre from a private stage or, the fire started by accident while Nero was away at Antium, rushing back 35 miles to help the now-homeless people of Rome.

Be that as it may, three things are certain. First, The fire burned for six days, utterly destroying three of the 14 districts of Rome and severely damaging seven others.  Second, Nero used the excuse of the fire to go after Christians, having many of them arrested and executed. Third, the Domus Aurea (“Golden Palace”) and surrounding “Pleasure Gardens” emperor Nero built on the ruins, would be the death of him.

Over the next three years, Emperor Nero built a vast palace complex over an area of more than 200 acres, linking existing buildings on the Palatine Hill with the Gardens of Maecenas and other imperial properties on the Esquiline hills and adding a grand colonnaded approach and vestibule surrounding an artificial lake.

One of the Great Wonders of antiquity, Nero’s “Golden house” was ruinously expensive, 300 rooms of dazzling white marble with pools in the floors and fountains splashing in corridors. There were jewel-encrusted walls and ivory clad columns.  An enormous vaulted ceiling completing the dome of the main dining room.  Slaves cranked an ingenious mechanism causing the ceiling to revolve like the heavens, as rose petals fluttered to the floor and atomized perfume spritzed on the assembled diners.

Suetonius described the complex as “ruinously prodigal”.  Nero himself would say nothing further on the palace’s dedication, save to say that he “had at last begun to live like a human being”.

At the center of it all was the Colossus Neronis, the Colossus of Nero, a giant gilded bronze statue…of himself.  Sources describe the thing as standing between 99′ and 121′ tall, roughly equivalent to the distance from the feet to the crown, of the Statue of Liberty.

With all of Italy “thoroughly exhausted by contributions of money” and “the provinces ruined”, the Emperor himself was universally hated.  In June 68, a runner arrived to inform the emperor.  He’d been tried in absentia and declared an enemy of the Roman people, sentenced to be returned to the Forum, and beaten to death.

Preparing himself for suicide, Nero paced up and down, muttering “Qualis artifex pereo”.  “What an artist dies in me”.   In the end, Nero was unable to take his own life.  He forced his private secretary Epaphroditos, to do the deed.

Ironically, Nero’s demise may have been unnecessary.  Notwithstanding the sentence of death, this was the end of Julio-Claudian dynasty.  The Senate was reluctant to put an end to a deified bloodline, even in the form of such a reviled individual.  Frantic negotiations were ongoing even as the emperor lay dying, to at least keep the man around, until he could produce an heir.

Nero’s days of being put out to stud, were never meant to be.  For his successors, the  profligate spending and outrageous lifestyle was a severe embarrassment.  Within a decade, the palace and surrounding complex was stripped of its marble, jewels, and ivory embellishments.

Within forty years, most of the grounds were filled with earth and built over, replaced by the Baths of Titus and the Temple of Venus and Rome. Vespasian drained the lake and built the Flavian Amphitheatre.

And still, the Colossus of Nero lived on.

In 69, Emperor Vespasian added a sun-ray crown and renamed the thing Colossus Solis, a dedication to the Roman sun god Sol Invictus (“Unconquered Sun”), patron of the legions and official Sun God of the late Roman Empire.

Around 128, Emperor Hadrian moved the statue from the Domus Aurea to just outside of the Colosseum, with a little help from the architect Decrianus and 24 elephants. Emperor Commodus removed the head and replaced it with a likeness of his own, but the head was restored after the death of Commodus, and so it remained. 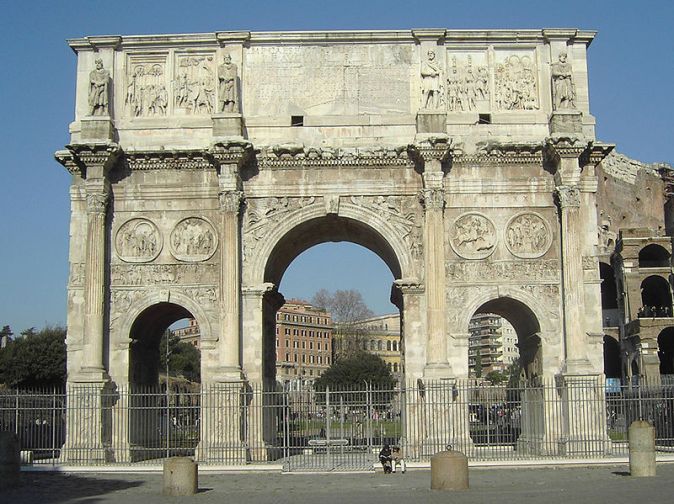 The Arch of Constantine, the last and largest of the Triumphal Arches of Rome and dedicated in AD315, was carefully positioned to align with Sol Invictus, so that the Colossus formed the dominant backdrop when approaching the Colosseum via the main arch.

“On the venerable day of the Sun let the magistrates and people residing in cities rest, and let all workshops be closed. In the country however persons engaged in agriculture may freely and lawfully continue their pursuits because it often happens that another day is not suitable for grain-sowing or vine planting; lest by neglecting the proper moment for such operations the bounty of heaven should be lost”.\

Constantine’s day of rest remains all these 2,000 years later but the colossus of the Unconquered Sun, is gone.  Where the thing went, nobody knows.  The last known reference in antiquity dates back to the Calendar of 354, the earliest illuminated manuscript containing full page illustrations.

Nero’s Colossus may have been destroyed during the Sack of Rome, in 410.  Perhaps it toppled in one of a series of 5th century earthquakes, the metal collected for scrap.

There is evidence that Sol Invictus outlived the western Roman Empire and survived into the early middle ages. Bede the Venerable, an English monk from the monastery of St. Peter in Northumbria, wrote sometime circa 672–735: “As long as the Colossus stands, Rome will stand, when the Colossus falls, Rome will also fall, when Rome falls, so falls the world“. 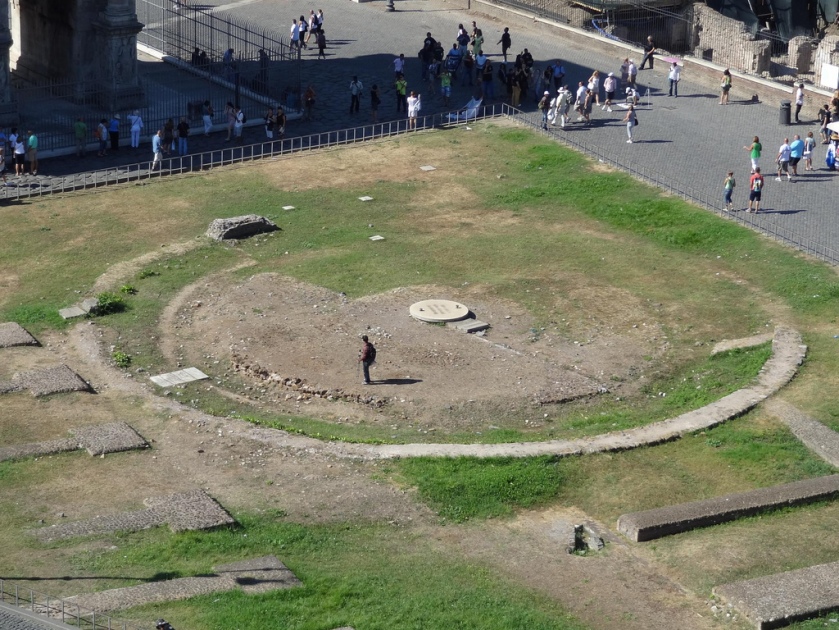