There’s a popular story that the 1947 Beechcraft Bonanza was called “American Pie”, but the story is a myth. The single engine airplane bore only the tail number: N3794N.

Jiles Richardson was a Texas DJ in 1958, the year he found recording success of his own with a song called “Chantilly Lace”.

Richie Valenzuela was only 16 when Del-Fi Records producer Bob Keane discovered the singer in California. “Donna”, a song he had written for his high school sweetheart Donna Ludwig, was on the way to #2 on the Billboard Hot 100, right alongside the 45’s “B” side, an old Mexican standard turned Rock & Roll tune called “La Bamba”. By 1958, Valenzuela was one of the hottest young recording artists of his time.

Charles Hardin Holley, “Buddy” to his friends and family, learned guitar, four-string banjo and lap steel guitar from his older brothers, Travis and Larry. The boy took to music at an early age, winning his first talent contest at age five.   One music critic would describe the Lubbock Texas native as “the single most influential creative force in early rock and roll.” Contemporary and later musicians claiming inspiration from Holley’s work include the Beatles, the Rolling Stones, Bob Dylan, and Elvis Costello.

58 years ago, his name changed as the result of a misspelling in a recording contract, Buddy Holly was headliner of the “The Winter Dance Party Tour”. Richardson, performing as the “Big Bopper” and Valenzuela, professionally known as Ritchie Valens, were on the tour, along with Dion and the Belmonts, Holly’s friend from Lubbock and fellow musician Waylon Jennings, and a young Owasso, Oklahoma Rockabilly musician and former “Crickets” band member, an enrolled member of the Cherokee Nation named Tommy Allsup.

The musical tour included 24 cities in 3 weeks, a grueling schedule under the best of circumstances.  This were anything but the best of circumstances. The tour bus had no heat.  A three-week winter bus tour of the upper Midwest is no place to be without heat. It was so cold that Holly’s drummer, Carl Bunch, suffered frostbite in his feet and left the tour in Clear Lake, Iowa. 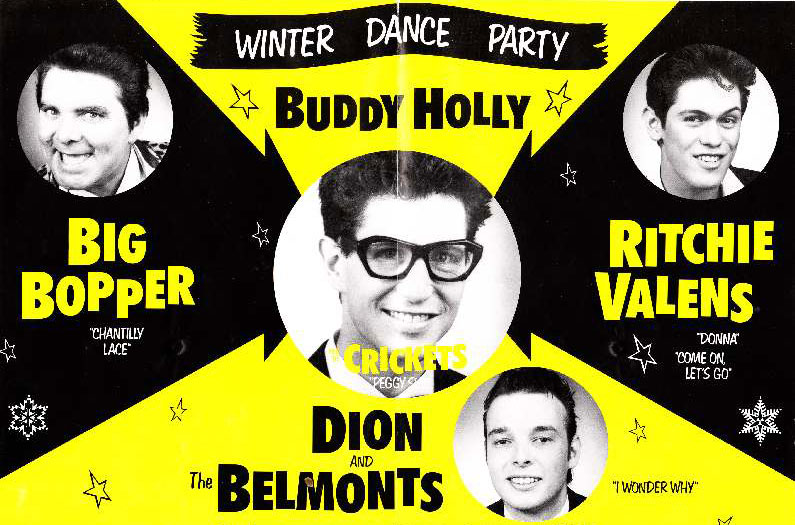 Holly was sick of it, and decided to charter a plane for himself and some of his guys. At least that would give them time to do laundry before the next performance.

Dwyer Flying Service got the charter with a 1947 Beechcraft Bonanza, at $36 per person. There’s a popular story that the four-seater aircraft was called “American Pie”, but the story is a myth. The single engine airplane bore only the tail number: N3794N.

Richardson was running a fever at the time, so Waylon Jennings gave up his seat so the Big Bopper could ride in comfort. Allsup and Valens flipped a coin for the last seat, the coin landing heads up. Ritchie Valens had won the coin toss. 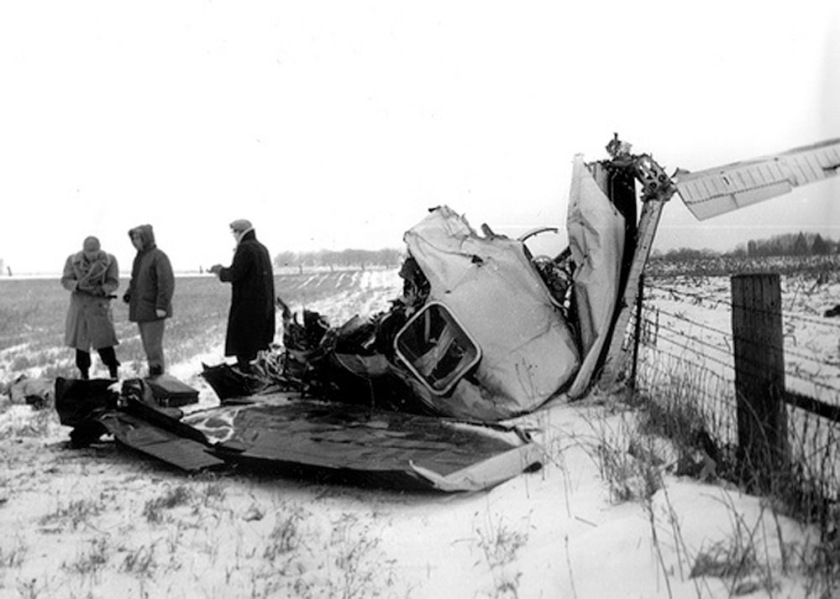 N3794N left the ground in a snowstorm, shortly after 1:00am on February 3. The pilot, Roger Peterson, may have been inexperienced with the instrumentation.  He may have become disoriented in near-whiteout conditions. One wing hit the ground in a cornfield outside of Clear Lake and the aircraft corkscrewed into the ground, throwing the three musicians clear of the plane. There was no fire, barely a sound.  Just a small aircraft swallowed whole, by a snow covered cornfield.

The bodies would lie in that field until late in the afternoon.

The show would go on. Needing to fill in at the next stop in Moorhead, Minnesota, they found a 15 year old talent across the state line in Fargo, and so began the musical career of Bobby Vee.

A boy named Don McLean heard about the plane crash while doing his morning paper route. One day, the future singer/songwriter would pen the words “February made me shiver, with every paper I’d deliver”.

Allsup returned to Odessa, resuming his musical career and opening a club in Dallas, in 1979. He called the place, “Tommy’s Heads Up Saloon”.  A nod to the “lost” coin toss that had saved his life.

Distraught, Buddy Holly’s widow miscarried their only child, shortly after the wreck.  His last song reached #1 on the UK charts on April 24, 1959, the first posthumous release ever to do so.  In the US the song charted at 13 on the Billboard Hot 100.  It would be Buddy Holly’s last top 20 hit in the nation.

The name of the song, was “It Doesn’t Matter Anymore.”

Inscribed on Ritchie Valens’ gravestone are the words, “Come On, Let’s Go.”

The last surviving member of Buddy Holly’s 1959 tour band passed away at the age of  85.  Tommy Allsup was a big fan of Western Swing, and member of the Rockabilly Hall of Fame.  Tommy’s son Austin is himself a singer/songwriter, that’s him in the picture.  Austin received messages of condolence on the passing of his father, including one from Ritchie Valens’ sister. “I told her in my message back“, he said “now my dad and Ritchie can finally finish the tour they started 58 years ago.”