Modern sport has seen its share of fan passion rising to violence, but the worst “futbol hooligan” pales into docility, compared with the crowd come to watch the chariot races. Imagine the worst fan violence of the modern era combined with aspects of street gangs and political organizations, each faction holding positions on the issues of the day and attempting to sway public policy by shouting slogans, between races. 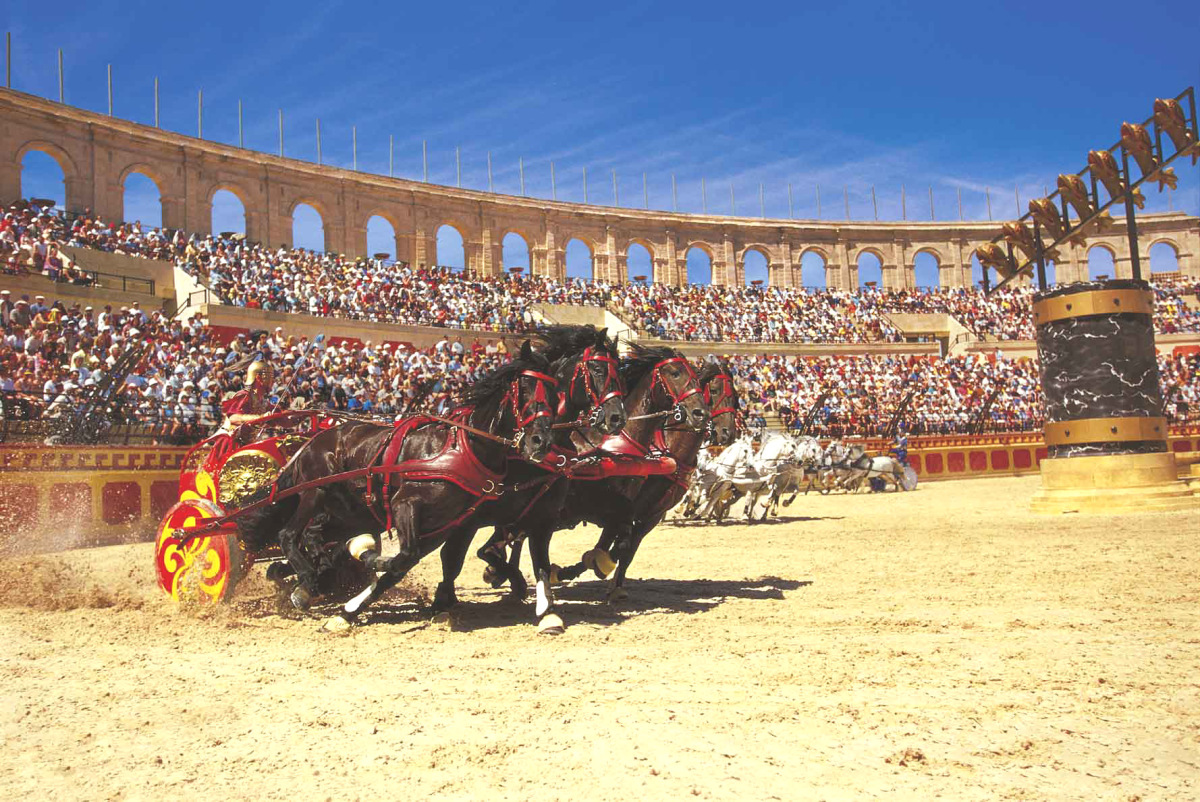 Chariots go back to the earliest days of the Roman Republic, coming down from the ancient Greeks by way of the Etruscan empire. The mythical abduction of the Sabine women was carried out, while the Sabine men watched a chariot race. While Romans never used them as weapons of war, chariots were used in triumphal processions, pulled by teams of horses, tigers or dogs, even ostriches.

What the Greeks regarded as an opportunity for talented amateurs to rise within their chosen sport, the Romans saw as entertainment. A class of professional drivers rose to meet the demand. 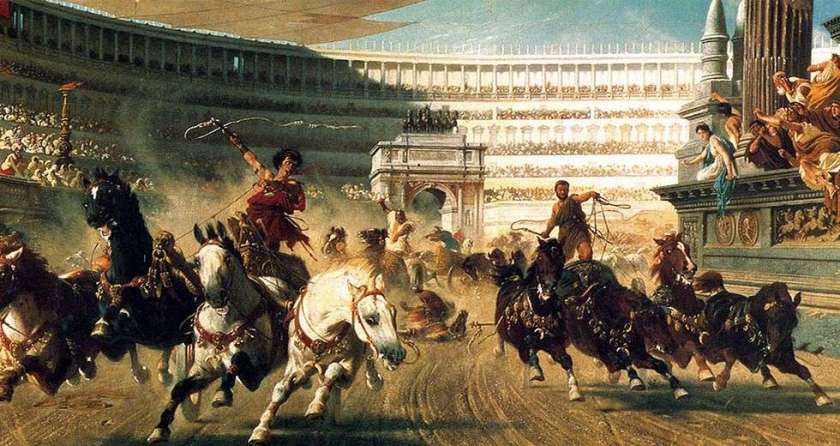 Look up the Highest Paid Athlete of All Time and you’ll be rewarded with the knowledge that Michael Jordan amassed career earnings of $1.85 Billion, according to Forbes Magazine.  Steve Forbes and Michael Jordan alike may be surprised to know.  Spanish driver Gaius Appuleius Diocles amassed an astonishing 35,863,120 sesterces, equivalent to $15 Billion, today.  Not bad for a man whose name suggests he probably began as a slave, freed by a guy named Gaius Appuleius.

The Hippodrome of the Byzantine era (from the Greek Hippos: Horse and Dromos: Path, or Way) was already the center of sport and social activity in 324.  That was the year Emperor Constantine moved the seat of the Roman Empire east to Byzantium, calling the place, Nova Roma. New Rome.  The name failed to catch on and the city came to be known as Constantinople. 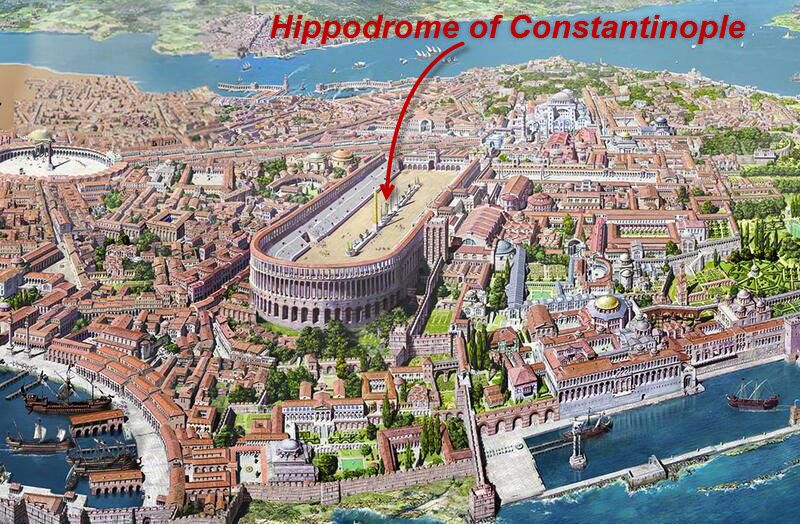 The age of Constantine saw enormous expansion of the city which bore his name, including enlargement of the Hippodrome to an impressive 1,476-feet long by 427-feet wide with a seating capacity of 100,000.  By way of comparison, the Empire State Building is 1,454-feet from sidewalk to the very tip of the spire.  Mercedes Benz Stadium in Atlanta, home of Super Bowl LIII, has a rated capacity of 71,000 spectators.

There were four teams or “factions” (factiones), distinguished by the color of their uniform: Red, Blue, Green and White, and echoed by the colors worn by their fans.  Twelve chariots would enter each race, three from each faction. Golden-tipped dolphins were tipped over, to count the laps. Each race ran seven. 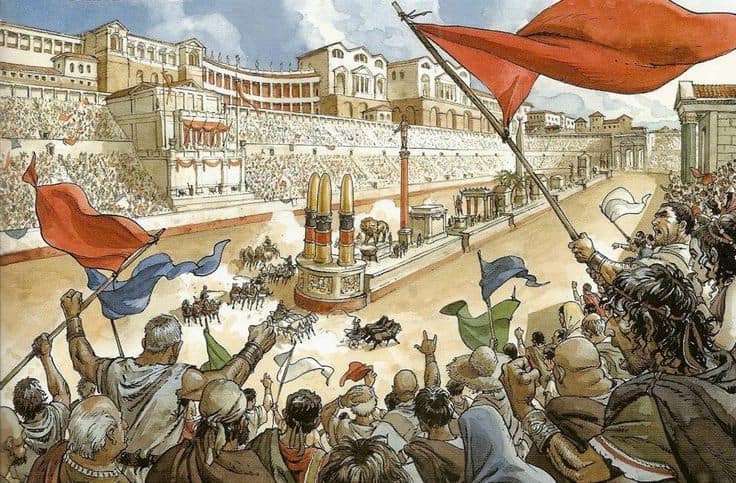 A raised median called a spina ran down the center, adorned with stone statuary and obelisks. Ganging up to drive opposing handlers into the stone median or the stands, whipping opponents and even hauling them out of their chariots was not only permitted, but encouraged.

It was the racetrack, or circus and the sport of chariot racing, that truly put the Fanatic in Fans. There are tales of poisoned horses and drivers. Lead tablets and amulets inscribed with curses, spiked through with nails and thrown from the stands. One such curse read:

I call upon you, oh demon, whoever you are, to ask that from this hour, from this day, from this moment, you torture and kill the horses of the green and white factions and that you kill and crush completely the drivers Calrice, Felix, Primulus, and Romanus, and that you leave not a breath in their bodies.

Racing chariots were as light as possible and extremely flimsy, to increase speed. With no suspension, even a bump could throw a driver into the path of oncoming teams. Clogs were built into lattice floors, to hold the driver’s feet. Teams of two (biga), three (triga) and four (quadriga) horses were common, but teams as large as six were not unheard of.

Though rare, ten-horse teams were known to take the field.

While Greek drivers held the reins in their hands, Roman charioteers wrapped them around the waist. Unsurprisingly, any driver thrown out would be dragged to death or trampled, unless able to cut himself free.

Crashes were frequent and spectacular, often killing or maiming driver and horse alike. Such wrecks were called naufragia, a Latin word translating as ”shipwreck”.  As many as forty chariots crashed in one catastrophic pile-up, near Delphi. 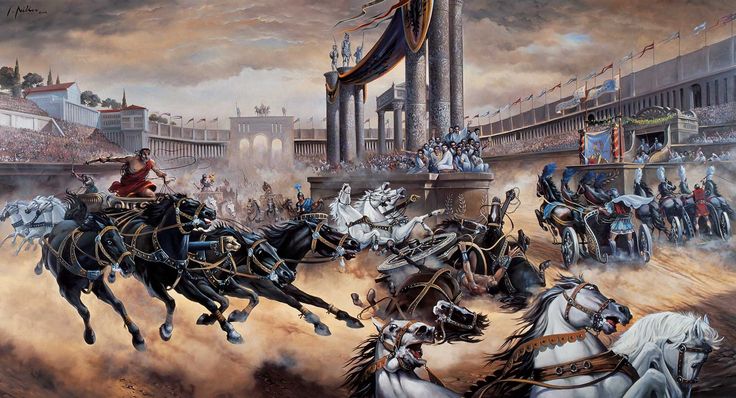 Modern sport has seen its share of fan passion rising to violence, but the worst “futbol hooligan” pales into docility, compared with the crowd come to watch the chariot races. Imagine the worst fan violence of the modern era combined with aspects of street gangs and political organizations, each faction holding positions on the issues of the day and attempting to sway public policy by shouting slogans, between races.

Distinctions between politics and sport, all but disappeared.  Emperor Vitellius, a fan of the Blue faction, had citizens put to death in the year 69 for talking trash about his team. Ten years later, one fan threw himself on the funeral pyre of his favorite driver.

In 531, fans of the Blues and Greens were arrested for murder, following riots which broke out during a chariot race. The killers were sentenced to death and most were executed but two, escaped. On January 10, 532, the two men one Blue and one Green had taken refuge in a church, surrounded by an angry mob.

Emperor Justinian, a supporter of the Blues, was beset with problems. The war in the east was not going well with the Persians and at home, rampant corruption and public fury over confiscatory tax policy.  Now this.  Justinian resorted to that time honored technique to pacify the turbulent masses.  Bread and Circuses.  He announced a chariot race.

It was a tense and angry crowd that arrived at the Hippodrome on January 13.  By race #22 chants of “Blue” and “Green” were changed to angry shouts, directed at the Emperor.  “Nίκα! Nίκα! Nίκα! (“Nika” translating as “Win!” “Victory!” or “Conquer!”).

Fury boiled over and anarchy turned to Riot.  The Royal Palace was laid siege over the next five days and the city, laid waste.  Even the magnificent Hagia Sofia, the foremost church in Constantinople, was destroyed.

Rioters proclaimed the Senator Flavius Hypatius as their new Emperor and demanded the dismissal of key advisers.  Soon Justinian himself prepared to flee for his life.  He surely would have done so if not for his wife, the formidable Empress Theodora.

“Those who have worn the crown should never survive its loss”, she declared. “Never will I see the day when I am not saluted as empress.  Who is born into the light of day must sooner or later die; and how could an Emperor ever allow himself to be a fugitive.”

The avenue of escape lay open to the Emperor but Theodora’s words, cut deep.  Not to be deterred, the Empress closed the door on escape.  “Royalty is a fine burial shroud” she said.  “The Royal color Purple makes a fine winding sheet.” 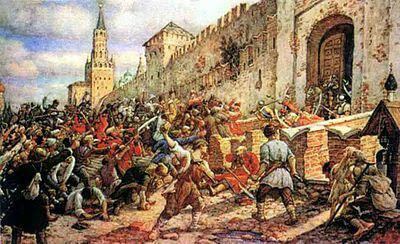 With spine thus restored, Justinian formulated a plan.  The popular eunuch Narses was sent with a bag of gold, into the lion’s den.  Small and slight of build, unarmed but for those coins, Narses entered the Hippodrome and went directly to the Blue section.  On this day in 562 Hypatius was in the very act of coronation when the eunuch spoke.  Narses reminded the Blues that Hypatius was a Green while Justinian himself, supported their team.

Gold was distributed among the Blues and the trap was sprung.  As Blue team supporters streamed out of the Hippodrome, Imperial troops led by the Generals Belisarius and Mundus fell upon the crowd, killing some 30,000 Blue and Green alike. 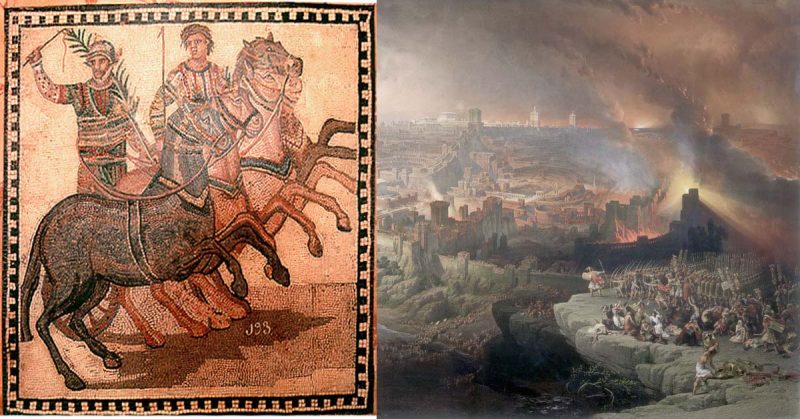 Thus ends one of the great “backfires” in political history.  Senator Hypatius was put to the sword and those who had supported the pretender, sent into exile.  Justinian I would rule another 33 years, rebuilding Constantinople, muzzling the Senatorial Class which had caused him such grief and reconquering lost territories, in Italy.

Wealthy estates were confiscated outright and races were suspended for a period of five years.  None were left to stand against this Emperor for a long and fruitful reign.