What must it be like to be at sea, frantically defending yourself against a human bomb, hurtling toward you at 500 miles per hour. 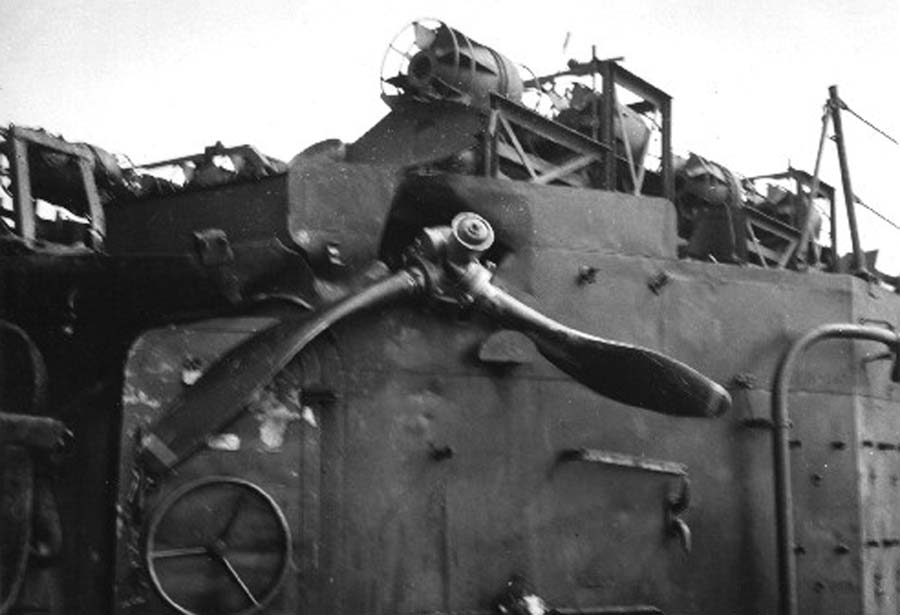 By the end of 1944, a series of naval defeats had left the Imperial Japanese critically short of military aviators, and the experienced aircraft mechanics and ground crew necessary to keep them aloft.

On October 14, the Atlanta class light cruiser USS Reno was hit by a Japanese aircraft in what many believed to be a deliberate crash.  The following day, Rear Admiral Masafumi Arima personally lead an attack by 100 Yokosuka D4Y “Judy” dive bombers against a carrier task force.  Arima was killed and part of one bomber hit the USS Franklin, the Essex-class carrier known as “Big Ben”.

Japanese propagandists were quick to seize on Arima’s example.  Whether this was a deliberate “kamikaze” attack remains uncertain.  The tactic was anything but the following week, during the battle of Leyte Gulf.  Japanese aviators were deliberately flying their aircraft, into allied warships.

By the end of the war, this “divine wind” would destroy the lives of 3,862 kamikaze pilots, and over 7,000 American naval personnel.

American Marines invaded Iwo Jima in February 1945, the first allied landing on Japanese territory. It was a savage contest against a dug-in adversary, a 36-day battle costing the lives of 6,381 Americans and nearly 20,000 Japanese.

The table was set for the bloodiest battle of the Pacific war.

On April 1, Easter Sunday, 185,000 troops of the US Army and Marine Corps were pitted in the 85-day battle for Okinawa, against 130,000 defenders of the Japanese 32nd Army and civilian conscripts.  Both sides understood, the war would be won or lost in this place.

While Kamikaze attacks were near-commonplace following the October battle for Leyte Gulf, these one-way suicide missions became a major part of defense for the first time in the battle for Okinawa.  Some 1,500 Kamikaze aircraft participated in the battle for Okinawa, resulting in US 5th Fleet losses of 4,900 men killed or drowned, and another 4,800 wounded.  36 ships were sunk and another 368 damaged.  763 aircraft, were lost.

What must it be like to be at sea, frantically defending yourself against a flying bomb, hurtling toward you at 500 miles per hour.

On April 16, 1945, the Sumner-class destroyer USS Laffey was assigned to radar picket duty, thirty miles north of Okinawa. At 8:25 a.m., the radar operator reported a solid cluster of blips at 17,000 yards, too numerous to count and approaching fast.  165 kamikazes and 150 other enemy aircraft were coming in, from the north

The Aichi D3A “Val” dive bomber appeared near the destroyer at 8:30. This was a reconnaissance mission and, fired upon, the Val jettisoned her bombs, and departed. Four more D3As were soon to follow, tearing out of the sky in a steep dive toward USS Laffey. 20mm AA fire destroyed two while the other two crashed into the sea. Within seconds, a Yokosuka D4Y “Judy” dive bomber made a strafing run from the port beam while another approached on a bomb run, from the starboard side. These were also destroyed but, close enough to wound three gunners, with shrapnel. The flames had barely been brought under control when another Val crashed into the ship’s 40mm gun mounts, killing three sailors while another struck a glancing blow, spewing aviation fuel from a damaged engine.

Immediately after, another D3A came in strafing from the stern, impacting a 5″ gun mount and disintegrating in a great column of fire as its bomb detonated a powder magazine. Another Val came in within seconds, crashing into the burning gun mount while yet another scored a direct hit, jamming Laffey’s rudder to port and killing several men. Within minutes, another Val and yet another Judy, had hit the port side.

It was all in the first fifteen minutes.

Soon, four FM2 Wildcats followed by twelve Vought F4U Corsair fighters from the escort carrier Shamrock Bay waded into the Kamikazes attacking Laffey, destroying several before being forced to return, low on fuel and out of ammunition.

By the time it was over, some fifty Kamikazes were involved with the action. USS Laffey suffered six Kamikaze crashes, four direct bomb hits and strafing fire that killed 32 and wounded another 71. Lieutenant Frank Manson, assistant communications officer, asked Commander Frederick Becton if he thought they should abandon ship. Becton snapped “No! I’ll never abandon ship as long as a single gun will fire.” He didn’t hear the comment, from a nearby lookout: “And if I can find one man to fire it.”

For USS Laffey, the war was over.  She was taken under tow the following day, April 17, and anchored near Okinawa.  She would not emerge from dry dock, until September.

Today, the WW2 destroyer is a museum ship, anchored at Patriots Point in Mount Pleasant, South Carolina.  A bronze plaque inside the ship is inscribed with the Presidential Unit Citation, received for that day off the coast of Okinawa:

For extraordinary heroism in action as a Picket Ship on Radar Picket Station Number One during an attack by approximately thirty enemy Japanese planes, thirty miles northwest of the northern tip of Okinawa, April 16, 1945. Fighting her guns valiantly against waves of hostile suicide planes plunging toward her from all directions, the U.S.S. LAFFEY sent up relentless barrages of antiaircraft fire during an extremely heavy and concentrated air attack. Repeatedly finding her targets, she shot down eight enemy planes clear of the ship and damaged six more before they crashed on board. Struck by two bombs, crash-dived by suicide planes and frequently strafed, she withstood the devastating blows unflinchingly and, despite severe damage and heavy casualties, continued to fight effectively until the last plane had been driven off. The courage, superb seamanship and indomitable determination of her officers and men enabled the LAFFEY to defeat the enemy against almost insurmountable odds, and her brilliant performance in this action, reflects the highest credit upon herself and the United States Naval Service.

For the President,
James Forrestal
Secretary of the Navy 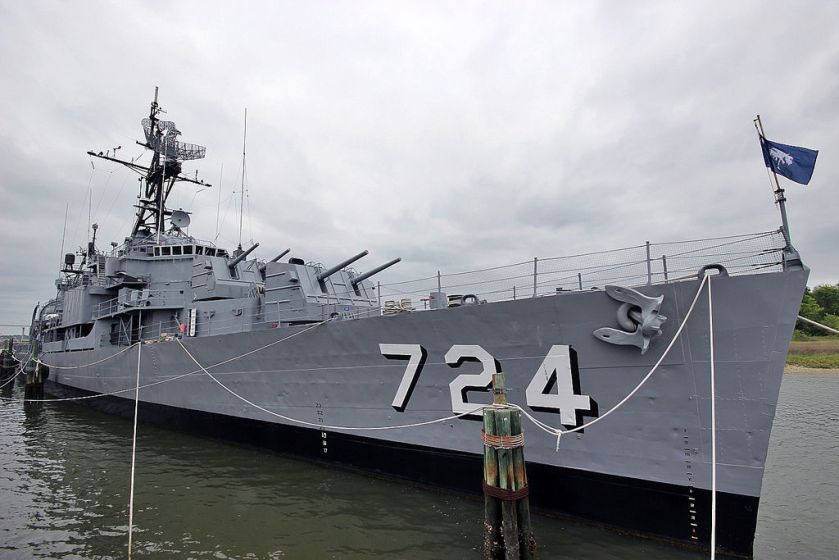 The Battle for Okinawa

“The Battle of Okinawa was an intense 82-day campaign involving more than 287,000 US and 130,000 Japanese troops. It was considered the bloodiest battle of the Pacific Theater, and more than 90,000 men died from both sides, along with almost 100,000 civilian casualties. During this conflict, Kamikazes inflicted the greatest damage ever sustained by the US Navy in a single battle, killing almost 5,000 men. All told, Kamikazes sank 34 ships and damaged hundreds of others during the entire war”. H/T Listverse.com