With the exception of a few sled dogs in Alaska, the US was the only country to take part in World War I, with virtually no service dogs in its military. 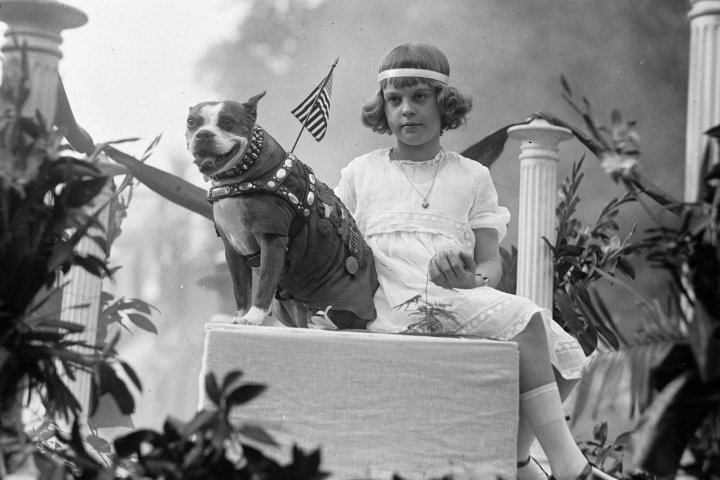 By the last year of the Great War, the French, British and Belgians had at least 20,000 dogs on the battlefield.  Imperial Germany had 30,000.

General Headquarters of the American Expeditionary Force recommended the use of dogs as sentries, messengers and draft animals in the spring of 1918. However, with the exception of a few sled dogs in Alaska, the US was the only country to take part in World War I, with virtually no service dogs in its military.

He looked like a terrier of some kind, similar to a pit bull.  Nobody knows anything more about him.  He showed up as a stray at Yale Field in New Haven, Connecticut, while a group of soldiers were training. The dog hung around as the men drilled and one soldier, Corporal Robert Conroy, started taking care of him. Conroy hid Stubby on board the troop ship when the outfit shipped out in 1917. 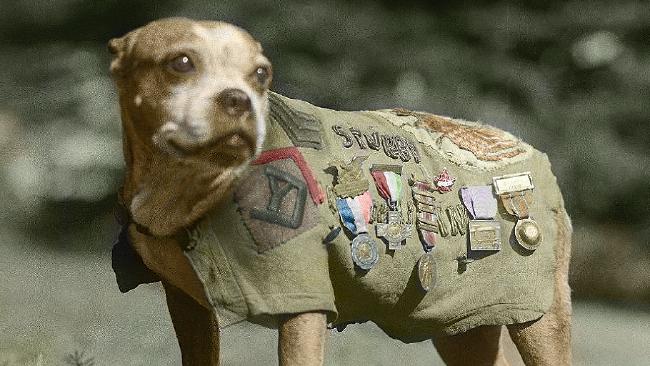 Stubby saved his regiment from surprise \gas attacks, located and comforted the wounded, and even once caught a German spy by the seat of his pants. The Hun, who’d been prowling behind allied lines at the time, was mapping trenches for artillery bombardment.   He was found spinning in circles with a large, muscular terrier affixed to his behind.  The Bosch was easily disarmed, but it took a considerable amount of coaxing before Stubby could be persuaded to let go of that German’s rear end. 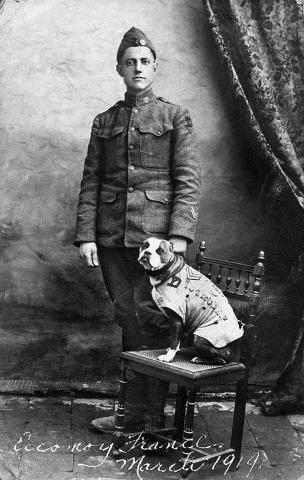 Stubby saw his first action at Chemin des Dames. Since the boom of artillery fire didn’t faze him, he learned to follow the men’s example of ducking when the big ones came close. It became a great game to see who could hit the dugout, first.  After a few days, the guys were watching him for a signal. Stubby was always the first to hear incoming fire.  We can only guess how many lives were spared by his early warning.

Following the Armistice, Stubby returned home as a nationally acclaimed hero, and was eventually received by presidents Harding and Coolidge. Even General John “Black Jack” Pershing, who commanded the AEF during the war, presented Stubby with a gold medal made by the Humane Society, declaring him to be a “hero of the highest caliber.”

Stubby toured the country by invitation and probably led more parades than any dog in American history.  He was promoted to honorary Sergeant by the Legion, becoming the highest ranking dog to ever serve in the Army.

Old age caught up with the small warrior on April 4th, 1926, as he took ill and died in his master’s arms.

Sergeant Stubby and a few of his contemporaries were instrumental in inspiring the creation of the US K-9 Corps.  Just in time for World War ll.

On returning home following service during WW2, only 4 of 592 Marine Corps dogs failed to adapt to civil life.