In the six years I’ve been writing “Today in History”, I’ve written about 700 of these stories. A father isn’t supposed to have favorites among his “children”, but I have to confess. I do. This is not one of those. This story, I detest. 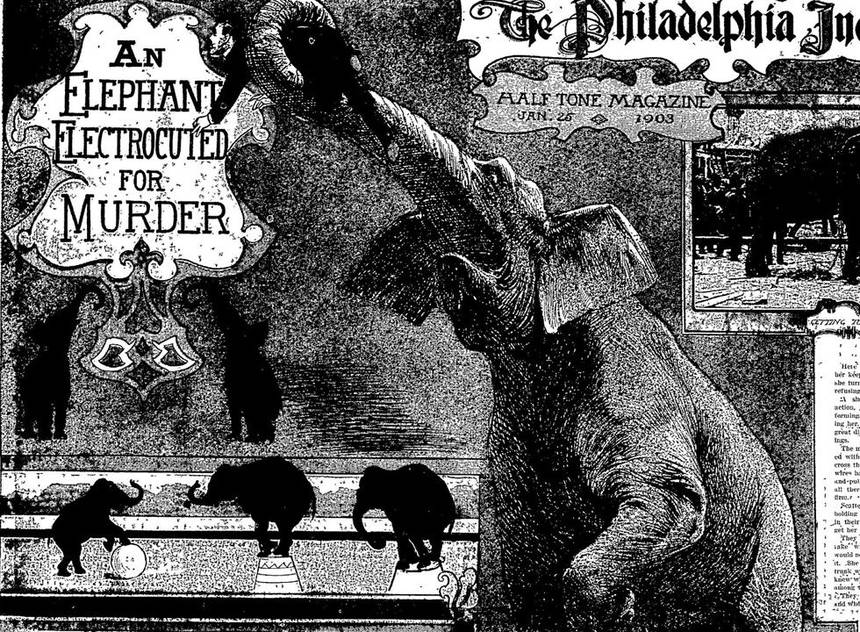 Thomas Edison didn’t invent the light bulb.  The first platinum filament bulb arrived some forty years earlier. What he did was to make the thing commercially viable, earlier versions being too expensive, and too quick to burn out. Edison went through thousands of materials before discovering the right filament, finally landing on carbonized bamboo leading to his famous quip, “I have not failed. I’ve just found 10,000 ways that won’t work.”

Half a world away from Edison’s workshop, an elephant was born in the jungles of Southeast Asia, captured by elephant traders and smuggled into the United States.

Circuses of the era were known for sleazy business practices. Adam Forepaugh was at home in this environment. The Forepaugh circus claimed Topsy was the first elephant born in America, a hoax publicly exposed when the elephant trader who sold the animal, tipped off arch-rival circus operator, P.T. Barnum.

Edison opened his first electrical power plant in 1882, in New York city. Two years later, a young Serbian immigrated to America, and went to work for Edison. His name was Nikola Tesla. Tesla was himself a brilliant inventor and helped his boss improve his Direct-Current generators, while simultaneously developing a different method of electrical distribution: Alternating Current.

Tesla tried to convince Edison the future belonged to AC, but the “Wizard of Menlo Park” was adamant. AC had no future he claimed, Edison would not budge. Tesla quit his job in 1885 and applied for several patents for his work in AC technology. In 1888, he sold his patents to industrialist George Westinghouse, and the Westinghouse Electric Company. The “War of the Currents” had begun.

Topsy grew to be 10-feet tall and twenty-feet long, and worked for the circus for 27 years.  She gained a reputation for being a “bad” elephant, but it’s hard to separate circus hype, from reality.  Newspapers of course, were happy to play along.   These were the days of Yellow Journalism, and circulation wars were red hot.  Newsies hawked lurid headlines, on the streets. Anything to sell papers – extra extra, read all about it.

Topsy was supposed to have killed twelve men by 1900.  More common accounts claim she had killed two Forepaugh & Sells Brothers’ Circus workers: one in Paris, Texas and one in Waco.  Journalist Michael Daly wrote in 2013 there is no record of anyone killed by an elephant in Waco.  The handler attacked in Paris received injuries, but there is no record of his being killed.

No matter, the story sold papers.  It was great for attendance too.  People crowded into the circus to see the “man-killing elephant”.

Topsy and the other elephants were being unloaded from a train in June 1902, when one Louis Dodero thought he’d”tickle” her, behind the ear. Topsy seized him around the waist and lifted him high, before hurling him to the ground. It could have been worse but a handler stepped in and savaged her, with a fork.

Meanwhile, Edison felt threatened by the rise of AC, which could be distributed over long distances far more cheaply, that DC.  Edison launched a propaganda campaign, publicly executing several dogs and even a horse, to demonstrate the dangers of AC.

When New York came looking for a more humane way to execute the condemned, the one-time opponent of capital punishment recommended an electric chair. In 1890, convicted murder William Kimmler was the first person to die in an electric chair, the apparatus powered by a Westinghouse AC generator designed by a salesman secretly on Edison’s payroll.

Despite such propaganda, Tesla’s low-cost alternative won out. Westinghouse won the contract to power the 1893 World’s Fair in Chicago, and the all-important generators, at Niagara Falls. The War of the Currents was over by 1896. AC has remained dominant in the power industry, to this day.

In March 1902, one James Fielding Blount entered the elephant’s tent, possibly drunk.  Accounts vary as to what happened next.  The common story is that Blount began teasing the animals each in turn, offering the elephants a bottle of whiskey. He reportedly threw sand in Topsy’s face and then burned the tip of her trunk with a cigar.  Topsy hurled the fool to the ground and crushed the life out of him

Forepaugh sold their “bad” elephant in June, when she was added to the animal menagerie at Coney Island’s Sea Lion Park. William “Whitey” Alt, Topsy’s handler, came along.

A bad summer season and heavy competition convinced owner Paul Boynton to get out of the business. New owners Frederick Thompson and Elmer Dundy decided to expand the park, and Topsy was put to work moving timbers and heavy equipment.

Newspapers and publicity shots characterized the work as “penance” for Topsy’s rampaging ways.

Meanwhile Alt, an habitual drunk and the only person who could handle her (albeit brutally), stabbed Topsy with a pitchfork and then set her loose to run free in the streets. The episode led to Alt’s arrest as did another, in which the drunk handler rode the elephant through the streets of Coney Island and into a local police station, causing the officers to dive for the cells for protection.

Alt was fired after that episode, and the owners claimed they had no way of handling the park’s elephant.  Thompson and Dundy tried to give her away without success, before hitting on an idea.  They would execute their problem elephant by hanging, and charge admission to witness the spectacle. 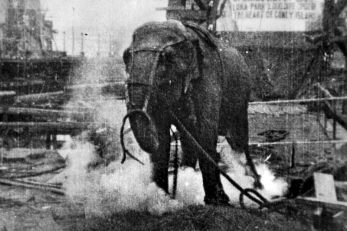 President of the American Society for the Prevention of Cruelty to Animals John Peter Haines got wind of the plan, and objected to the “needlessly cruel” means of execution. Weeks of negotiations ensued, in which the owners offered to give Topsy to the SPCA, before settling on an “all of the above” means of execution including poison, strangulation by means of ropes tied to a steam powered winch, and electrocution.

The execution was carried out on August 4, 1903 and recorded by an Edison film crew, one of many “actuality” films produced by the Edison Mfg. Co. from 1897, on.  The short film “Executing an Elephant” runs for 74 seconds. You can find it on Youtube if you are so inclined. I don’t want to see it again.

In the following years, Thomas Edison was blamed for staging the spectacle, to discredit his rival. The story is repeated from that day to this, but it’s a myth.

Edison lost his battle to supply the world’s electricity, years before. There’s no evidence he was even there on the date of execution, and his written correspondence contains no mention of it.  This then, is the story of an innocent animal, caught between ignorance and a changing business climate.  I do not think I could hate this story, more.