Located on the Mediterranean coast of Lebanon, Beirut is the largest seaport in the country.  It’s one of the oldest cities on earth.  The first reference may be found in the ancient Egyptian Tell el Amarna letters, written in the 15th century BC.

Once called “The Paris of the Middle East”, Beirut was at one time a regional hub of business, banking and tourism.

Lebanon descended into a vicious civil war in 1975, a fifteen-year period which Lebanese ex-patriots have tearfully described to me as a time of “national suicide”.

In 1982, a Multinational Force of United States Marines, Navy SEALs, French Paratroopers and American, Italian and British soldiers were sent to Lebanon to restore the peace.

Thirty-five years ago, October 23 was a Sunday. Things were quiet in the early morning hours, most of Battalion Landing Team 1/8 still asleep in their barracks.

In 1982, the Islamic Republic of Iran established a base in the Syrian-controlled Beqaa Valley in Lebanon, a base which remains in operation, to this day.  On September 26, 1983, the American National Security Agency (NSA) intercepted a diplomatic message from the Iranian Ministry of Information and Security (MOIS) to its ambassador in Damascus Ali Akbar Mohtashemi, instructing the ambassador to “take spectacular action against the American Marines.” For reasons which remain unclear, the message would not be passed to the Marines in Beirut until October 26, three days after the barracks bombing.

Three hundred American military service personnel were living in the four-story concrete aviation administration building, at Beirut International Airport.  Guards paid scant attention at first, when the 19-ton, yellow stake-bed Mercedes truck entered the airport grounds. Such heavy vehicles were a common sight and besides, a water delivery was expected that morning. 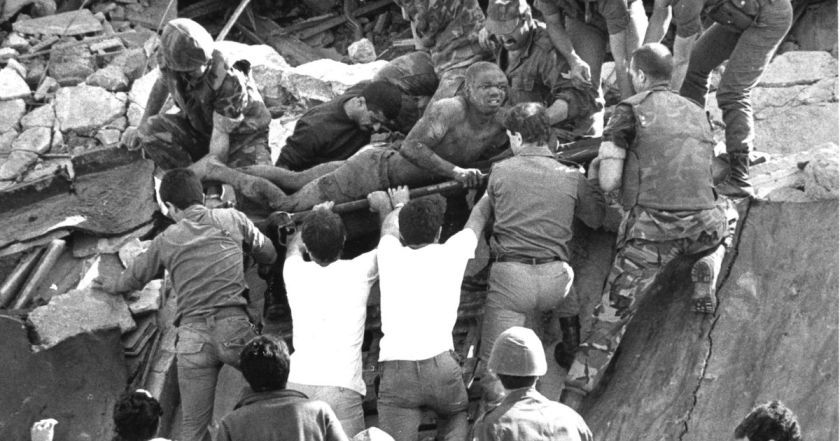 Driven by an Iranian National, the truck carried a massive fuel-air explosive device, capable of an explosive force equivalent to 21,000 pounds of dynamite. The explosive was piled on a marble slab on top of a layer of concrete, to direct the destructive force upward.

Peacetime rules of engagement (ROE) prohibited the use of deadly force without explicit permission, or in times of imminent personal danger.  Weapons were to be kept on safe, with empty chamber.

The suicide bomber picked up speed, smashing through a five-foot concertina wire barrier and in-between two guard shacks.  Lance Corporal Eddie DiFranco on the driver’s side was first to realize something was wrong and managed to chamber a round, but too late. The hijacked truck struck the 1st Battalion, 8th Marine Regimental Battalion Landing Team barracks at 6:22am local time.

The resulting explosion lifted the four story building, shearing steel-reinforced concrete support columns and dropping floor slabs, like pancakes.  241 American military service personnel were killed in the explosion, or crushed to death in the collapse.  Another 100 were injured.  The BLT building, had ceased to exist.  It was the deadliest single-day attack on United States Marines since the February 1945 battle for Iwo Jima.

Rabbi Arnold Resnicoff, assistant chaplain for the U.S. Sixth Fleet was in a neighboring building, and remembered the scene:  “Bodies and pieces of bodies were everywhere. Screams of those injured or trapped were barely audible at first, as our minds struggled to grapple with the reality before us”.

Ten minutes later, a second suicide bomber drove his truck bomb into the French barracks, the nine story Drakkar building housing the 1st Parachute Chasseur Regiment.  By this time alerted to the attack, guards were able to shoot and kill the driver, but not before he detonated the device.

I didn’t include the two “jihadists”.  They’re not worth counting.

For years, radical Islamist tactics were confined mostly, to kidnappings.  The Beirut barracks bombings were the first use of suicide tactics, in order to slaughter as many westerners, as possible.

Six months later, a suicide car bomb killed sixty-three at the United States embassy in Beirut, seventeen of whom, were Americans.   In 2017, Vice-President Mike pence called it “the opening salvo in a war that we have waged ever since—the global war on terror”.

A Lebanese cedar tree grows in the green expanse of section 59 at Arlington National Cemetery, marking the final resting place of twenty-one honored dead, among the first Americans to die in the global war against Islamist terrorism. A fight which continues, to this day.

Today, thirty-five years later, survivors and first responders to the Beirut Barracks bombing continue to struggle with the sights, sounds and smells of that day.

The properly functioning conscience of a good man, recoiling in horror at what he has seen in service to his country.

The participants in this story, both living and dead, have earned our respect and our gratitude.   They have earned the right to be remembered.