Once, the small dog was able to perform a task in minutes, which would have otherwise taken an entire airstrip out of service for three days, and exposed a construction battalion to enemy fire. 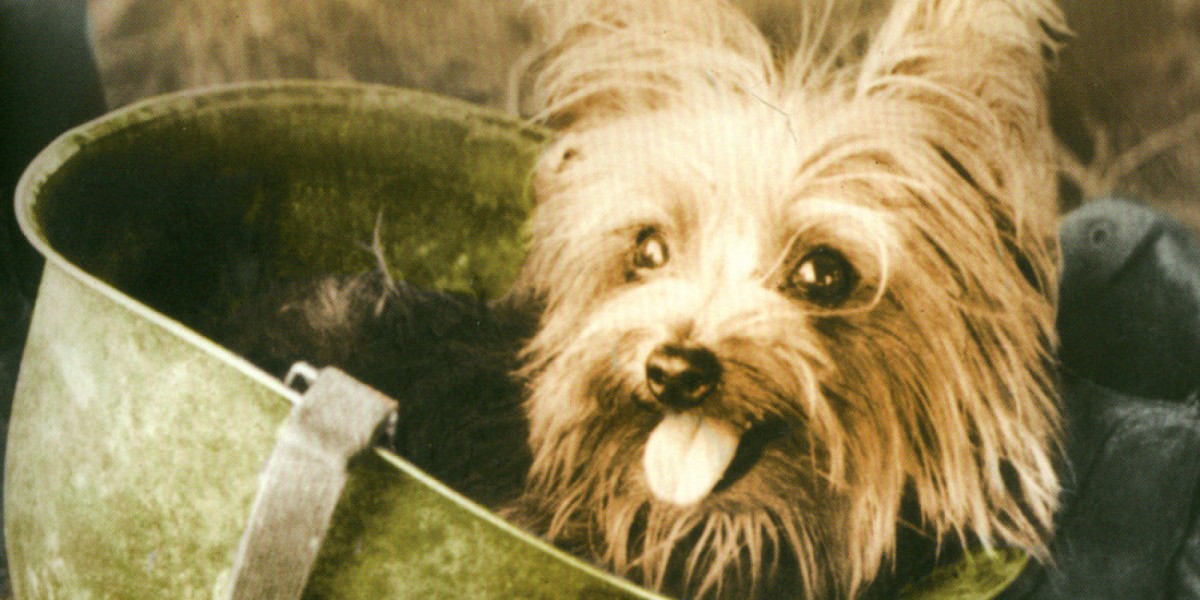 The first dog may have approached some campfire, long before recorded history. It may have been hurt or it maybe it was looking for a morsel. Dogs have been by our side ever since.

Over history, the unique attributes of Canis Familiaris have often served in times of war. Ancient Egyptian artwork depicts dogs at work in multiple capacities. The ancient Greeks used dogs against Persian invaders at the Battle of Marathon. 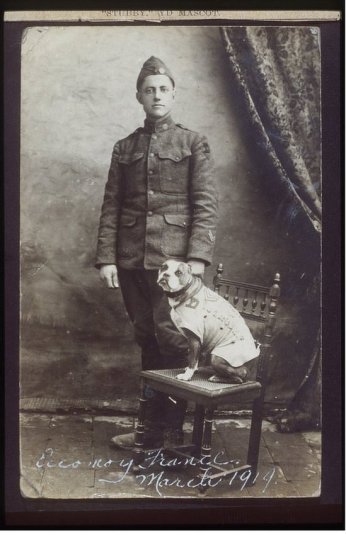 The European allies and Imperial Germany had about 20,000 dogs working a variety of jobs in WWI. Though the United States didn’t have an official “War Dog” program in those days, a Staffordshire Terrier mix called “Sgt. Stubby” was smuggled “over there” with an AEF unit training out of New Haven, Connecticut.

Stubby is credited with saving an unknown number of lives, his keen sense of hearing giving his companions early warning of incoming artillery rounds.

Once, Stubby even caught a German spy who had been creeping around, mapping allied trenches. It must have been a very bad day for that particular Bosch, to be discovered spinning in circles, a 50-pound, muscular terrier affixed to his arse.

The US War Dogs program was developed between the World Wars, and dogs have served in every conflict, since.  My own son in law Nate served in Afghanistan with “Zino”, a five-year old German Shepherd and Tactical Explosives Detection Dog (TEDD), trained to detect as many as 64 explosive compounds.

The littlest war dog first appeared in the jungles of New Guinea, when an American soldier spotted a “golden head” poking out of an abandoned foxhole. It was all of 4-pounds, a seven-inch tall, Yorkshire Terrier.  At the time, nobody had the foggiest notion of how the tiny dog had gotten there. The soldier brought her back to camp and sold her to a comrade for £2 Australian, about $6.44.  He was Corporal William Wynne, who named her “Smoky”. 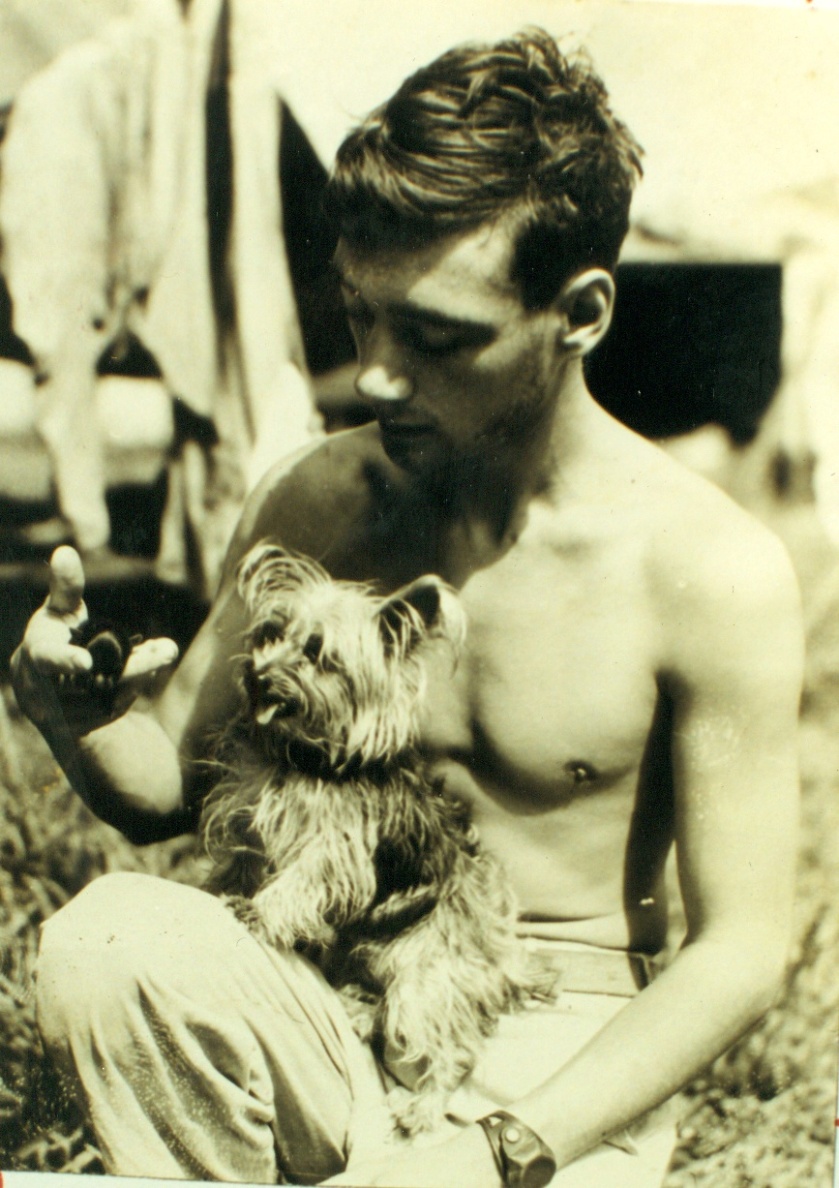 Smoky lived a soldier’s life for the next eighteen months, traveling about in a rucksack and learning to parachute from trees.  At first, soldiers thought she might have belonged to the Japanese side, but they brought her to a POW camp and quickly learned that she understood neither Japanese nor English commands.

The little dog flew 12 air/sea rescue and photo reconnaissance missions, secured in Wynne’s backpack. She survived 150 air raids and a typhoon, often giving soldiers early warning of incoming fire.  Wynne credited Smoky with saving his life one time, on an LST transport ship.  It was around October 3, 1944 off Morotai, when the Japanese submarine RO-41 sank the American destroyer escort, USS Shelton.  The decks around them were shaking from anti-aircraft and machine gun fire, when Smoky guided Wynne to duck at the moment an incoming shell struck, killing 8 men standing next to them. She was his “angel from a foxhole.” 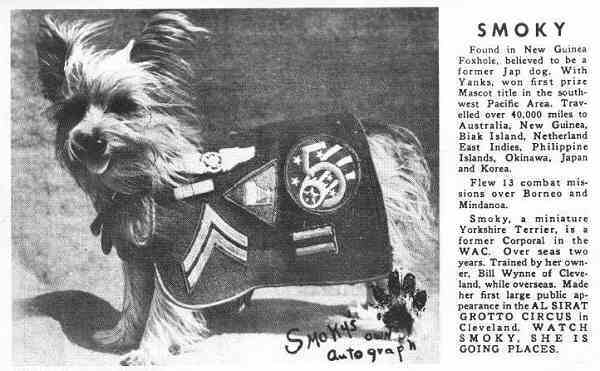 Once, the small dog was able to perform a task in minutes, a job which would have otherwise taken an airstrip out of service for three days, and expose a construction battalion to enemy fire. The air field at Lingayen Gulf, Luzon, was crucial to the Allied war effort.  The signal corps needed to run a teletype communication wire across the field.  To do so in the conventional manner would have taken days, and put the airfield out of operation.  Except, there was one possible workaround.

A 70-foot, 8” drain pipe half filled with dirt, already crossed under the air strip

Wynne credits the dog with enabling the airfield to remain open, saving 40 aircraft and 250 ground crew from exposure to Japanese fire.  Let him tell the story: 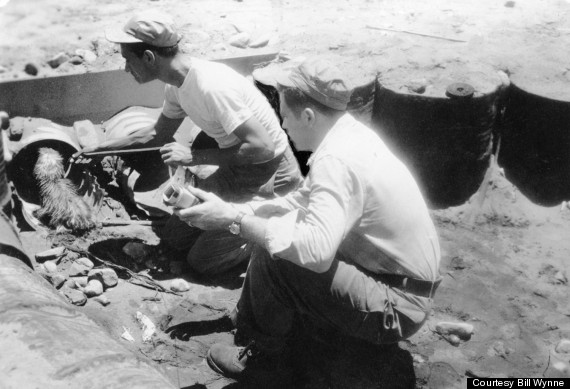 “I tied a string to Smoky’s collar and ran to the other end of the culvert . . . (Smoky) made a few steps in and then ran back. `Come, Smoky,’ I said sharply, and she started through again. When she was about 10 feet in, the string caught up and she looked over her shoulder as much as to say `what’s holding us up there?’ The string loosened from the snag and she came on again. By now the dust was rising from the shuffle of her paws as she crawled through the dirt and mold and I could no longer see her. I called and pleaded, not knowing for certain whether she was coming or not. At last, about 20 feet away, I saw two little amber eyes and heard a faint whimpering sound . . . at 15 feet away, she broke into a run. We were so happy at Smoky’s success that we patted and praised her for a full five minutes”. 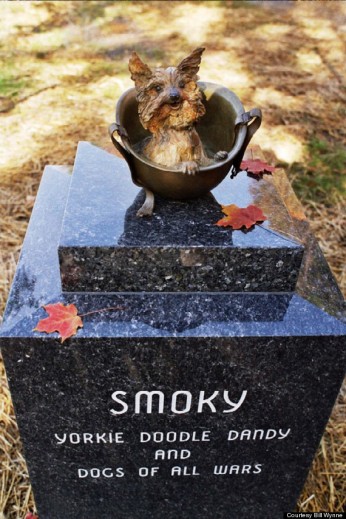 Smoky toured all over the world after the war, appearing in over 42 television programs and licking faces & performing tricks for thousands at veteran’s hospitals.  In June 1945, Smoky toured the 120th General Hospital in Manila, visiting with wounded GIs from the Battle of Luzon. She’s been called “the first published post-traumatic stress canine”, and credited with expanding interest in what had hitherto been an obscure breed.

The Littlest Wardog died in her sleep in February 1957 at the age of fourteen, and buried in a .30 caliber ammunition box.  Years later,a  life-size a bronze sculpture of Smoky sitting in a GI helmet was installed over her final resting place in Rocky River Ohio, setting atop a two-ton blue granite base.

Bill Wynne was 90 years old in 2012, when he was “flabbergasted” to be approached by Australian authorities. They explained that an Australian army nurse had purchased the dog from a Queen Street pet store, and became separated in the jungles of New Guinea. sixty-eight years later, the Australian delegation had come to award his dog, a medal. 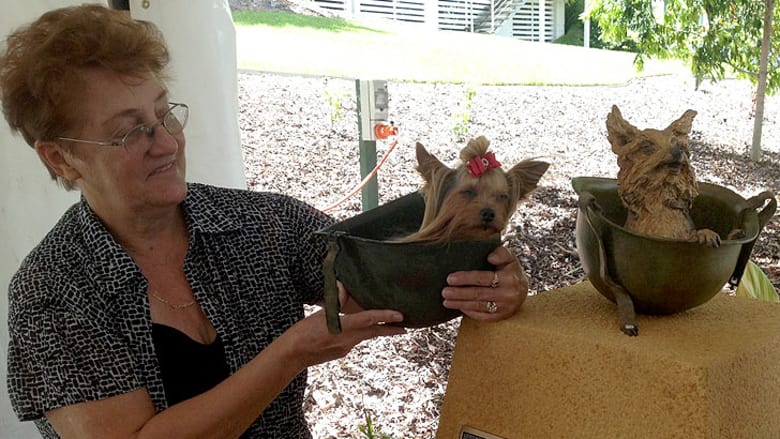 A memorial statue was unveiled on December 12 of that year, at the Australian War Memorial at the Queensland Wacol Animal Care Campus in Brisbane. 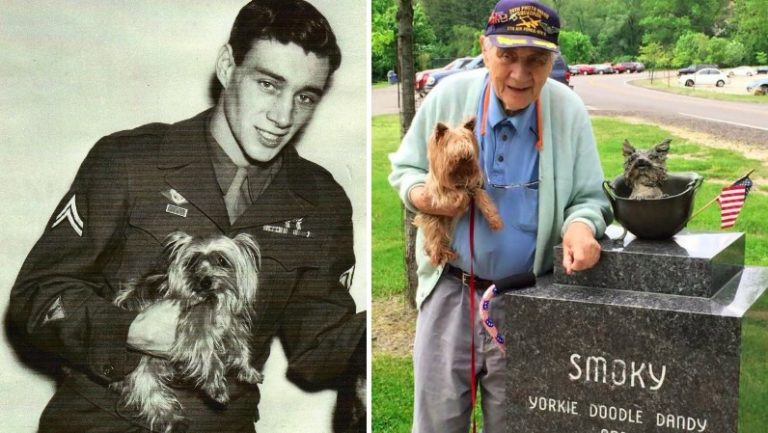 On December 11, 2015, the Australian Royal Society for the Prevention of Cruelty to Animals (RSPCA) awarded Smoky the Purple Cross.  According to the press release, the award was “established in 1993 to recognize the deeds of animals that have shown outstanding service to humans, particularly where they have demonstrated exceptional courage, by risking their own safety or life, to save a person from injury or death. Since its inception, only nine animals have been awarded the prestigious award”.

“Yorkie Doodle Dandy” by Bill Wynne, tells the story of the dog Animal Planet has called, the first therapy dog. Originally published in 1996 by Wynnesome Press, the book is currently in its 5th edition, by Top Dog Enterprises, LLC.

As a personal aside, Nate and Zino were separated after their tour in Afghanistan. They were reunited in 2014, when the dog came to live with Nate and our daughter Carolyn in their home in Savannah. Last fall, Sheryl and I traveled to Houston with a friend, to celebrate our anniversary at the “Redneck Country Club”.  2,000 miles from home and completely by chance, who do we meet but the trainer who taught Zino to be a TEDD in the first place. Small world.