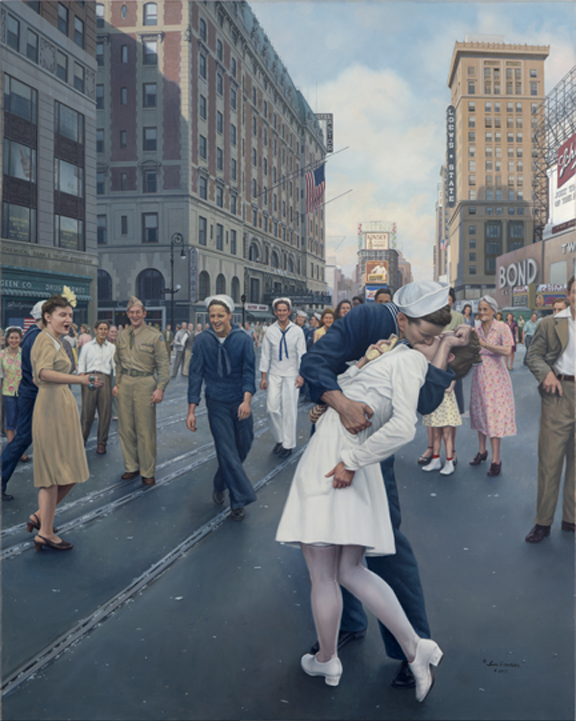 Rumors were flying since the small hours on the morning of August 14, but President Harry Truman had yet to receive the formal surrender. The White House’ official announcement was still hours away.

Born and raised in Austria, Greta Zimmer was 16 years old, in 1939. Fearful of the war bearing down on them, Greta’s parents sent her and her two sisters to America, not knowing if they’d ever see each other again.

Patients had been coming into the office all morning, with rumors that the war was over.  Greta’s lunch break came just after 1:00.  She set out for Times Square, knowing that the lit and moving type on the Times news zipper would give her the latest information.

Petty Officer 1st Class George Mendonça was on his last day of shore leave, spending the day with his new girlfriend, Rita Petry. The couple had heard the rumors too, but right now they were enjoying their last day together. The war could wait until tomorrow. 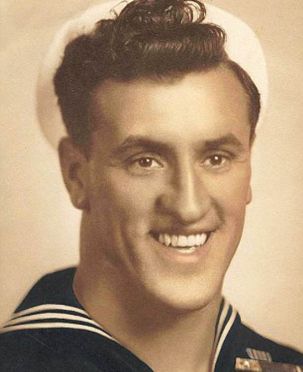 The couple went to a movie at Radio City Music Hall, but the film was interrupted by a theater employee who turned on the lights, announcing that the war was over. Leaving the theater, the couple joined the tide of humanity moving toward Times Square.

The pair stopped at the Childs Restaurant on 7th Ave & 49th, where bartenders were pouring anything they could get hands on into waiting glasses. Revelers were scooping them up as fast as the glasses were filled.

Mendonça’s alcohol-powered walk/run from the restaurant left Rita trailing behind, but neither one seemed to mind. Times Square was going wild.

The sailor from the USS Sullivans had seen bloodshed. He’d been there on May 11, as kamikaze planes smashed into the USS Bunker Hill. Explosions and fires killed 346 sailors that day. 43 of their bodies would never be found. Mendonça had helped to pull the survivors, some of them hideously burned, out of the water. He had watched while Navy nurses tended to the grievously wounded, and the dying. 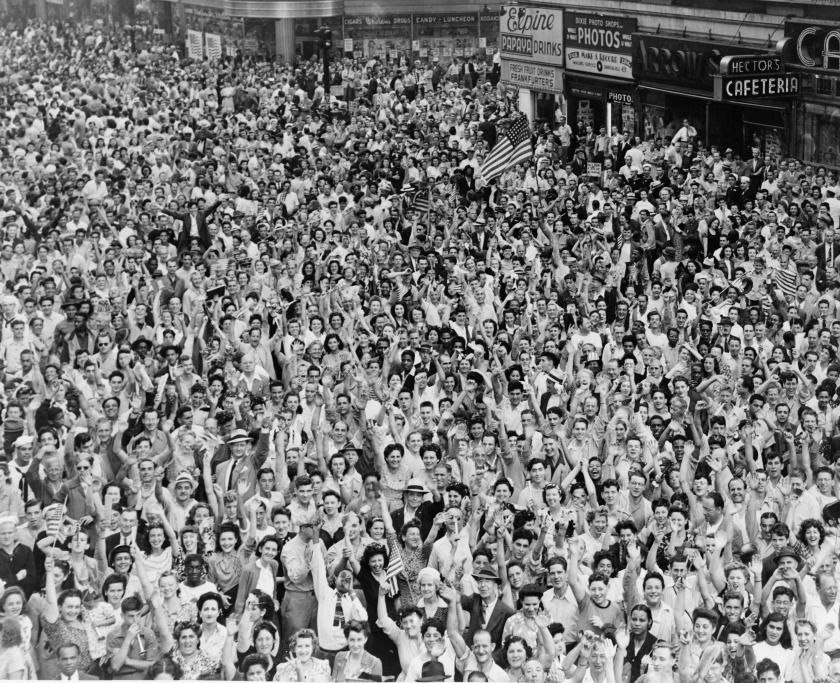 Reporters from the AP, New York Times, New York Daily News and others descended on Times Square, to record the spontaneous celebration.

Now Eisenstaedt and his Leica Illa rangefinder camera worked for Life Magazine, heading for Times Square in search of “The Picture™”.

The lit message running around the Times Building read, “VJ, VJ, VJ, VJ” as George Mendonça grabbed a stranger and kissed her. Two seconds later the moment was gone, but Eisenstaedt and his camera had been in the right place at the right time.

After the war, Greta Zimmer learned that both of her parents had died in Nazi concentration camps. She later married and made her home in Frederick, Maryland. Greta Zimmer Friedman never returned to Austria, and passed away in September 2016, at the age of 92.

The German made camera which took the iconic image recently went to auction at the Westlicht auction house in Vienna, where it was expected to sell for $30,000. The winning bid was nearly $150,000.

George Mendonça and Rita Petry were married after the war, and put down roots in Rhode Island.  The couple, now married seventy-one years, recently celebrated George’s ninety-fifth birthday.  A framed copy of the famous photograph hangs in the hallway of the couple’s home.   Rita once pointed to herself, grinning in the background of the image.  And then she admitted:  ‘In all these years, George has never kissed me like that.’