Research suggests that we all carry Neanderthal genes and that these may have changed our immune systems, leaving us vulnerable to diseases such diabetes and cancer. 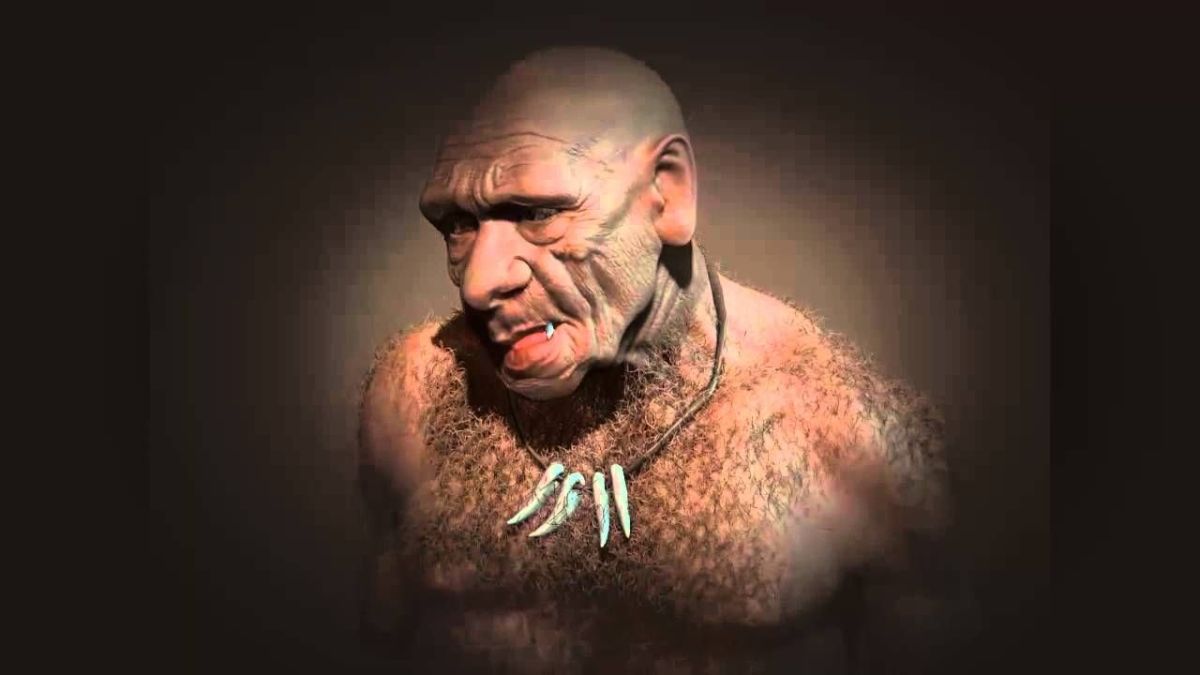 In the 17th century, the German Reformed Church teacher and hymn writer Joachim Neander liked to hike a valley outside of Düsseldorf. The beauty of nature was inspirational, clearing his mind and inspiring verses like “See how God this rolling globe/swathes with beauty as a robe…Forests, fields, and living things/each its Master’s glory sings.”  The theologian contracted tuberculosis and died at the age of thirty but lived on in a way, in the valley which came to bear his name.

Nearly 200 years later, three years before Charles Darwin published the Origin of Species, workers quarrying limestone in the Neander Valley discovered an unusual skull.  This was no ordinary head, elongated and nearly chinless as it was, with heavy ridges over the eyes.  Heavy bones were found alongside,  which fitted together, oddly.

From top, clockwise:  a) Neander Valley by Friedrich Wilhelm Schreiner, oil on cardboard, 1855, b) original bones discovered the following year, and c)Artist’s conception of what he looked like, H/T Artist: Kennis & Kennis Reconstructions

The state of archaeological science had much to learn in 1856.  Who knows, 22nd century historians and scientists may look back at our time, and say we had a long way to go.  At the time, even to discern fossils from ordinary rock was beyond the ability of many scientists. One common method involved licking the fossil. If the thing had animal material, it would stick to your tongue.

Despite such misconceptions, scholars of the day had no shortage of theories. This was a lost Cossack, a bowlegged rider suffering from rickets, a painful condition resulting in weak and misshapen bones. To some, the life of pain resulting from such a condition made perfect sense, the bony eye ridges resulting from perpetually furrowed brow.

British geologist William King suspected something different. Something more radical. This was no aberrant human being nor even a lost ancestor. This was a member of a long lost alternate humanity.   An extinct but parallel species to our own.  King published a paper in 1864 hypothesizing his idea of an evolutionary dead end, naming the long lost species after the poet who had once wandered the valley in which it was discovered. He called it Homo Neanderthalensis: Neanderthal Man.

Having no context from which to draw conclusions, King fell back on the pseudo science of phrenology to describe Neanderthal man, along with preconceptions of “primitive” and “savage” races. The image of a stupid and grunting brute emerged from this analysis. King opined that “The thoughts and desires which once dwelt within it never soared beyond those of a brute.” Today we may look at such thinking as itself savage and primitive, but applying modern ideas to earlier times is a dangerous undertaking. Ideas of Eugenics survived well after King’s time, and into the modern era.

On this day in 1908, the brothers Amadee and Jean Bouyssonie found the most complete Neanderthal skeleton to date in a small cave near La Chapelle-aux-Saints, in France.  This skeleton includes the skull, jaw, most of the vertebrae and several ribs, along with most of the long bones of his arms and legs, plus a number of smaller bones from the hands and feet.

French palaeontologist Marcellin Boule studied the remains and envisioned a brutish, hairy and gorilla-like beast with opposable toes and bent spine, walking on bowed legs with bent knees.  Boule’s reconstruction was influential. Decades later, scientists and popular culture viewed Neanderthal as bent and stupid brutes. Boule got it wrong that time but, to his credit, was one of the first to recognize Piltdown Man, as a paleoanthropological hoax.

Subsequent analysis of the “Old Man of La Chappelle” revealed not the bent-over beast of Boule’s imagination, but a fully erect biped, bent with advanced osteoarthritis.

What’s more, massive tooth loss and lack of mobility revealed that this specimen could neither hunt nor scavenge with ease, and would have had great difficulty in chewing his food. This and the unmolested state of the skeleton compared with animal bones found nearby suggest a man greatly cared for by his contemporaries, as well as deliberate burial of the body.

This wasn’t even an “old man” by our standards.  The skeleton is currently estimated to have been that of a man between 25 and 40 years, demonstrating the Hobbesian adage that life was once indeed, “Nasty, Brutish and Short”.

Today, to call someone a “Neanderthal” is to insult him as a stupid savage.  It appears that our cousin was nothing of the sort. 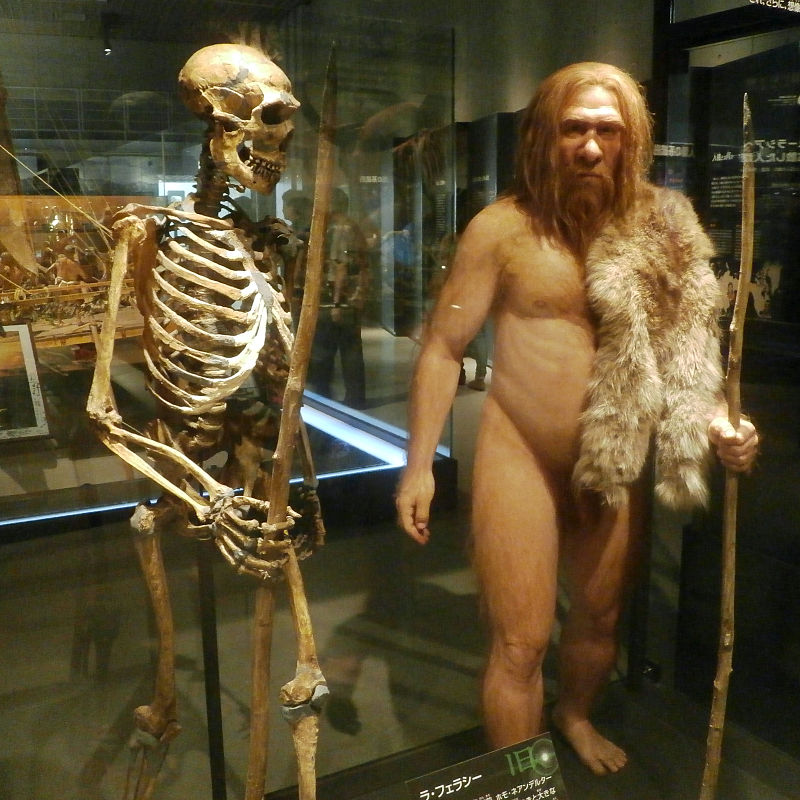 The hyoid bone situated at the floor of the mouth serves as a connecting-point for the tongue and other musculature, giving humans the ability to speak. A delicate structure likely to be lost in most fossilized remains, the first Neanderthal hyoid was only discovered in 1989.

Shorter in stature and considerably more powerful than Cro-Magnon, our direct ancestor and all but indistinguishable from ourselves, Neanderthal bodies were suited to the ice age of the early and middle Paleolithic era.

Neanderthal emerged on the Eurasian landmass between 100,000 and 200,000 years ago.  Possessed of a brain only slightly smaller than Cro-Magnon, Neanderthals walked upright, formed and used simple tools and controlled fire.  They even buried their own dead, at least sometimes, and some researchers theorize that they built boats and sailed the Mediterranean.  Imperfectly formed tools and weapons found alongside more sophisticated specimens even suggest that he educated his children.

Despite all that, Neanderthal man is an evolutionary dead end and not our ancestor, though he did “coexist” for a time, with our Cro-Magnon forebears.  It’s even possible if not probable that the two bred together and produced children, though this was likely your random hookup rather than any long-term cross-breeding.

Modern DNA analysis suggests that the two species even shared some genetic disorders, such as psoriasis, Crohn’s disease and a variety of auto-immune conditions such as Lupus.

Research even suggests that we  carry Neanderthal genes, every one of us, and that these may have changed our immune systems leaving us vulnerable to diseases such diabetes and cancer.

The idea is not as strange as it sounds. Last year, Sir Richard Branson was in the news, claiming that he had looked into his family ancestry. Forty generations back, it turns out that Branson is related to Charlemagne.  That’s no big deal, according to Genetecist Adam Rutherford. Speaking at the Chalke Valley History Festival, Rutherford explained that “Literally every person in Europe is directly descended from Charlemagne. Literally, not metaphorically. You have a direct lineage which leads to Charlemagne,” adding “Looking around this room, every single one of you … is directly descended between 21 and 24 generations from Edward III.”  The only difference between celebrities and the rest of us it turns out, is the means to prove it.

So, maybe calling someone ‘Neanderthal’ isn’t such an insult, after all.  Perhaps there’s one in there somewhere, peering back at us from our bathroom mirror. 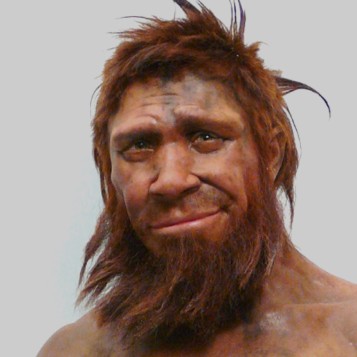