“Before man reaches the moon, mail will be delivered within hours from New York to California, to Britain, to India or Australia by guided missiles. We stand on the threshold of rocket mail.”

If we talk about RocketMail, we’re usually speaking of one of the early free webmail services, up there with Hotmail and a few others.  Not to be confused with the days, when the mail was delivered on Real rockets.

In the early 19th century, expanding western settlement meant that a letter sent to California took one of several routes, to get there. Earlier stagecoach passages were replaced by steamship routes traveling around South America, or by overland transfer 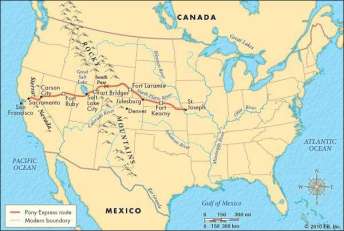 across the Isthmus of Panama or the Isthmus of Tehuantepec, in Mexico. The simmering tensions which would lead the nation to Civil War would prove such a system inadequate, as the rapid transfer of information became ever more important.

The Central Overland California & Pike’s Peak Express Company, better known as the Pony Express, was the short-lived effort to speed up the process. Between April 1860 and October ’61, continuous horse-and-rider relays carried letters the 2,000-mile distance from St. Joseph, Missouri to Sacramento, California.

Individual riders covered 75 – 100 miles at a time, on somewhere between five and ten horses.

The Pony Express compressed the standard 24-day schedule for overland delivery to ten days, but the system was a financial disaster.  Little more than an expensive stopgap before the first transcontinental telegraph system.

Throughout the “Reconstruction” era and on toward the turn of the century, individuals living in more remote precincts had to pick up the mail at sometimes-distant post offices, or pay private carriers.

The Post Office began experiments with Rural Free Delivery (RFD) as early as 1890, but the system was slow to catch on. Georgia Congressman Thomas Watson pushed RFD legislation through the Congress in 1893, making the practice mandatory. Implementation was slow and RFD wouldn’t be fully adopted until 1902, but elected officials were quick to implement this new way to reach out to voters.

The first mail carried through the air arrived by hot air balloon on January 7, 1785, a letter written by Loyalist William Franklin to his son William Temple Franklin, at that time serving a diplomatic role in Paris with his grandfather, the United States’ one-time and first postmaster, Benjamin Franklin.

The first (unofficial) mail delivery by aircraft took place on February 17, 1911, when Fred Wiseman flew three letters between Petaluma and Santa Rosa, California. Comprehensive airmail rules were adopted by the Universal Postal Union in 1929. Since then, airmail was often marked “Par avion”: “By airplane”.

Section 92 of the 1873 Postal Laws and Regulations book states that carriers would deliver “as frequently as the public convenience may require.” What exactly constitutes “Public Convenience” was open to interpretation but, in some cities, business districts received between three and five daily deliveries and twice a day to residential areas. 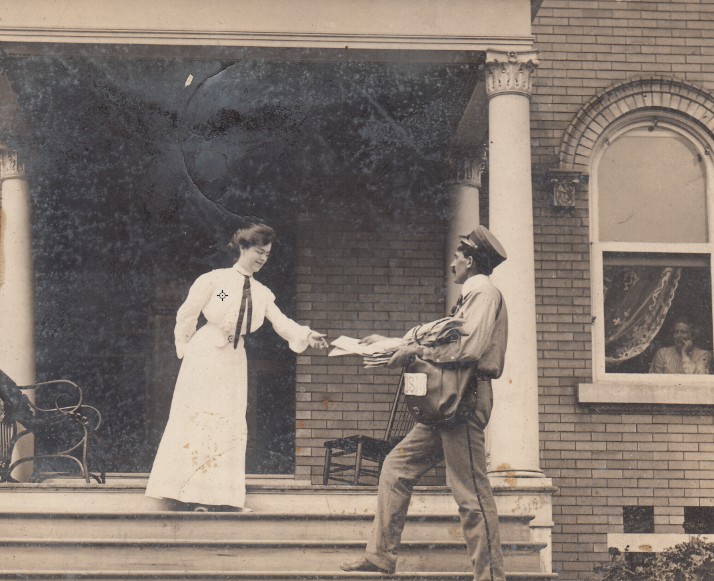 In 1950, the Postmaster General ordered residential deliveries reduced to once a day and, by the early 1990s, businesses had learned to live with the same.  There was little to be improved upon, in this happy state of affairs.  Unless of course you’re receiving your mail, by rocket.

The concept is older than you might think.  German novelist Heinrich von Kleist (1777 – 1811) was the first to bring up the idea in 1810, calculating that a network of batteries could relay a letter from Berlin to Breslau, a distance of 180 miles, in half a day. Such a system was attempted using congreve rockets in 19th century Tonga, but proved unreliable. By 1929, American ambassador to Germany Jacob Gould Schurman was discussing the finer points of transatlantic rocket mail delivery, with a German reporter.

A 1936 experiment with rocket-powered mail delivery between New York and New Jersey ended with 50-lbs of mail, stranded on the ice of frozen Greenwood Lake.

From India to the United Kingdom, the 1930s were a time for experimentation with rocket-propelled mail delivery. 1,200 letters were packed into a rocket fuselage in July 1934, and fired between Harris Island in the Hebrides and Scarp island in Scotland, a distance of some 1,600 meters (1 mile). The first rocket blew up so they gathered all the letters they could find, and packed them into a second. That one exploded, too. 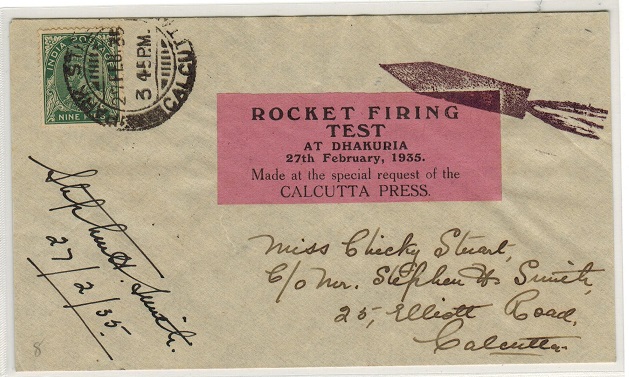 As a piece of technology, the rockets’ origins are both simple and ancient. A rocket, quite simply, is a vessel, powered by stored propellant such as gunpowder, kerosene, or liquid hydrogen & oxygen. A Missile is a vehicle propelled by rockets, whose purpose it is to deliver a payload.

In 1959, the diesel-electric submarine USS Barbero was officially designated a branch location of the United States Post Office, for purposes of “delivering” mail to Naval Station Mayport, in Jacksonville, Florida. The nuclear warhead was removed from a Regulus Cruise missile and two Post Office-approved containers installed.  3,000 letters and postcards were inserted, addressed to President Eisenhower, Postmaster General Arthur Summerfield, and other dignitaries.

On June 8, the 13,685-pound, 32-foot cruise missile launched from the decks of the Barbero, two Aerojet-General 33,000 lbf solid-propellant boosters giving way to the turbojet engine which would guide the missile onto its target.   Twenty-two minutes later the missile struck, the Regulus opened and the mail forwarded to the Jacksonville post office for sorting and routing. 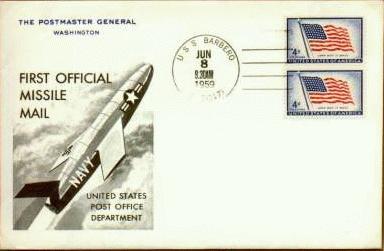 Postmaster Summerfield was effusive, proclaiming the “historic significance to the peoples of the entire world”.  “Before man reaches the moon”, he exclaimed, “mail will be delivered within hours from New York to California, to Britain, to India or Australia by guided missiles. We stand on the threshold of rocket mail.” 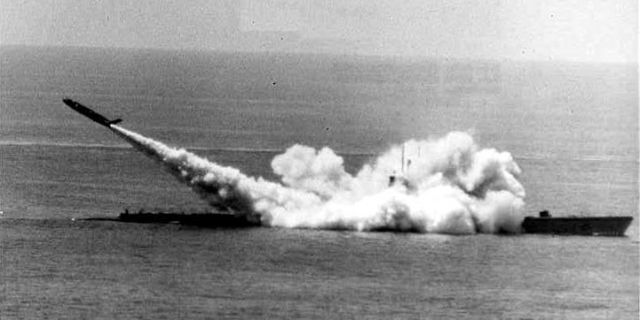 Arthur Summerfield’s golden future of missile mail, was never meant to be.  Despite the postmaster’s enthusiasm, the system was Way too expensive.  The Defense Department saw the first and only mail delivery by intercontinental ballistic missile in history, as more of a demonstration of the weapon system’s capabilities.  In any case, aircraft were  delivering airmail by this time, in less than a day.

The Regulus was superseded by the Polaris missile in 1964, the year in which Barbero ended her nuclear strategic deterrent patrols. She was struck from the Naval Registry that July, and suffered the humiliating fate of the target ship, sunk off the coast of Pearl Harbor on October 7 by the nuclear submarine USS Swordfish.

So it is that a United States mail container may be discovered at the Submarine Force Museum in Groton Connecticut, fired from a Balao-class sub, fifty-nine years ago, today.