Not even concentration camp guards could resist the irony of seven dwarves. They immediately awakened Dr. Josef Mengele, the “Angel of Death”. 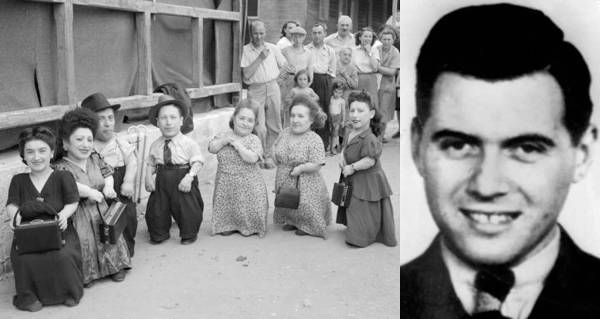 Shimson Eizik Ovitz was a Romanian rabbi, a WWI-era entertainer, and a man afflicted with pseudoachondroplasia. He was a dwarf. Ovitz fathered 10 children by two normal sized wives:  Brana Fruchter and Batia Bertha Husz. Three of those grew to normal height, the other seven were dwarves.

Batia gave the kids a piece of advice that stuck with them, all their lives: “through thick and thin” she said, “never separate. Stick together, guard each other, and live for one another”.

The dwarves were talented musicians, performing a variety show throughout the ’30s and early ’40s as the “Lilliput Troupe”. They toured Romania, Hungary and Czechoslovakia with their normal height siblings serving as road crew, until being swept up by the Nazis and deported to Auschwitz.

The train arrived around midnight on May 19th, 1944 and, accustomed to celebrity, one began to give out autographed cards. The family would soon be disabused of any notions of celebrity.

Not even concentration camp guards could resist the irony of seven dwarves. Dr. Josef Mengele was immediately awakened, knowing of his perverse fascination with the malformed, and what he called “blood” (family) experiments. The “Angel of Death”was delighted, “I now have work for 20 years”. 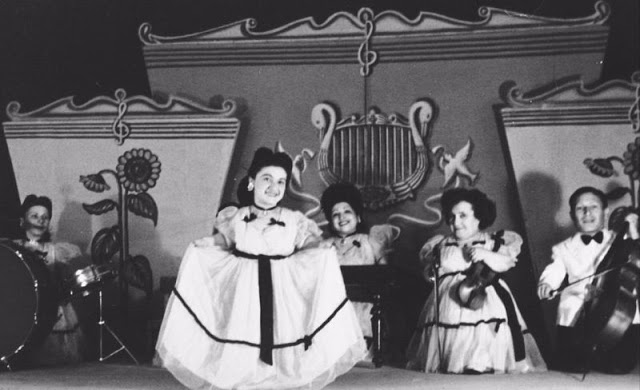 The ten siblings were spared from the gas chamber that night, along with two more family members, a 15-month old boy and a 58-year old woman. Families of their handyman and a neighbor were also spared, insisting that they were close relatives. A total of 22 people.

The family was housed in horrific conditions, yet seven dwarves didn’t come along every day.  They were kept alive for further use and, as bad as it was, the food and clothing was better than that received by most camp inmates. Mengele even allowed them to keep their hair, and arranged special living quarters for them.

The bizarre and hideous “experiments” Mengele performed in the name of “science” were little more than torture rituals.  The three skeletons displayed of their dwarf predecessors, an ever-present reminder of what could be.  Boiling water was poured into their ears followed by freezing.  Eyelashes and teeth were pulled without anesthesia.  Blood was drawn until they would throw up and pass out, only to be revived to have more blood drawn.

On one occasion, the Angel of Death told the family they were “going to a beautiful place”. Terrified, the siblings were given makeup, and told to dress themselves. Brought to a nearby theater and placed onstage, the family must have thought they’d be asked to perform. Instead, Mengele ordered them to undress, leaving all seven naked before a room full of SS men.  Mengele gave a speech, and then the audience was invited onstage to poke and prod the humiliated family.

One day of fresh horrors ended to reveal the next, and still they lived.  It was unusual for even two or three siblings to survive the Auschwitz death camp.  I don’t believe there was another instance where a family of twelve lived to tell the tale.

Auschwitz was liberated by the Soviet Red Army on January 27, 1945.

Traveling by foot to their Transylvanian home village of Rozavlea, the family found it ruined, though they did find a stash of gold coins where they had left it, buried for safekeeping before the war.

There was no future for them in this place.  Only 50 of the 650 Jewish inhabitants of the village ever returned. The family emigrated to Israel in May 1949, resuming their musical tour and performing until the group retired in 1955.

Josef Mengele never faced justice. He fled to South America after the war, and suffered a stroke while swimming in 1979.  The cause of death for one of the great monsters of history, was accidental drowning.

The youngest and last of the Ovitz dwarves, Piroska, “Perla” to her friends, passed away two days before the terrorist attack on the World Trade Towers. She spoke for the whole family, I think, when she said “I was saved by the grace of the devil”.