For a century, French colonial rulers had looted the mineral wealth of Cambodia, leaving a countryside riddled with mines.  After four years of Communist rule, those mines were filled with bones.

Between AD790 and 1431, the Khmere Empire founded by Prince Jayavarman II occupied much of what today includes Cambodia, Thailand, Laos, and southern Vietnam.  Now extinct, this powerful civilization was in its day, home to the largest city in the world.

Until recently overrun by Jungle, the capital city of Angkor, whose original name was Yashodharapura (“Glory-bearing city”), was nearly the size of modern day Los Angeles, and home to a million people.  Even today, the Hindu temple complex of Angkor Wat, built circa 1122, remains the largest religious monument in the world.

During the 1950s, a group of some 200 middle-class Cambodian kids were educated at French Universities.  The greater part of them formed a student group of Marxist-Leninist intellectuals, dreaming of an agrarian utopia on the Indo-Chinese peninsula.

What began as a small leftist insurgency in Cambodia, grew in power thanks to support from Communist China and North Vietnam.  From only a few hundred individuals in 1960, these “Red Khmeres” (Khmere Rouge) grew into an effective insurgency against the Khmere Republic government of Norodom Sihanouk and Lon Nol.

By early 1975, the Khmere Rouge had overwhelmed Khmer National Armed Forces.  The Khmere Rouge captured the Cambodian capital of Phnom Penh on April 17, 1975, overthrowing the government and executing its officers.

Unlike the cult of personality grown up around the Kim family of North Korea or that of the Stalinist USSR or Maoist China, the Communist Party of (the newly re-christened) “Kampuchea” (CPK) was led by a secretive, eight-member group of those same leftist intellectuals from the Paris student days, calling itself the the “Angkar”, (pronounced ahng-kah, translating as ‘The Organization’).

The Khmere Rouge and the Angkar, led by Communist General Secretary Saloth Sar (better known as ‘Pol Pot’), set to work creating an agrarian peasant’s utopia by exterminating political opponents in “Democratic Kampuchea”, including monks, teachers and business owners.  Anyone possessing so much as a whiff of an education, a pair of eyeglasses even, was deemed an “enemy of the people” and clubbed to death on the spot.

For a century, French colonial rulers had looted the mineral wealth of Cambodia, leaving a countryside riddled with mines.  After four years of Communist rule, those mines were filled with bones.

At the height of its depravity, the Khmere Rouge smashed the heads of infants and children against Chankiri (Killing) Trees so that they “wouldn’t grow up and take revenge for their parents’ deaths”. Soldiers laughed as they carried out these grim executions.  Failure to do so would have shown sympathy, making the killer him/herself, a target. 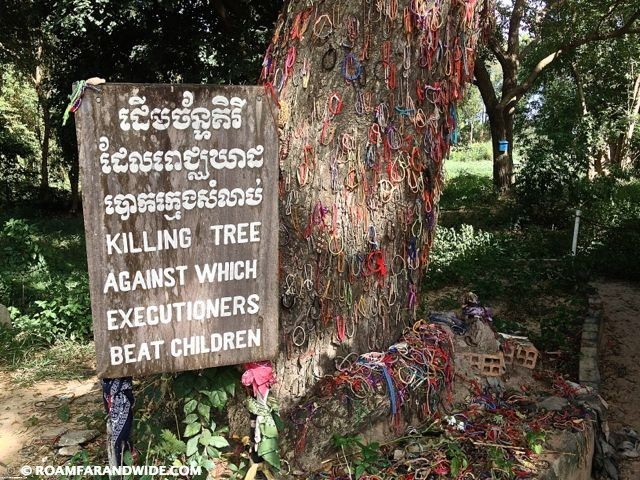 As the war in neighboring Vietnam drew a close, the “Killing Fields” of Cambodia remained part of an unknown and terrible future.   Representatives of the United States, North & South Vietnam, and the Vietcong signed the Paris Peace Treaty in January, 1973. The last Americans airlifted out of Saigon on April 30, 1975 as the capital fell to Communist forces.

On May 12, the American flagged container ship SS Mayaguez passed the coast of Cambodia bound for Sattahip, in southwest Thailand.  At 2:18pm, two fast patrol craft of the Khmere Rouge approached the vessel, firing machine guns and then rocket-propelled grenades across its bows.

Captain Charles Miller ordered Mayaguez to a stop, but not before broadcasting SOS and Mayday messages.   39 Americans were now hostages of the Khmere Rouge.  Some of the most savage killers, of the 20th century. 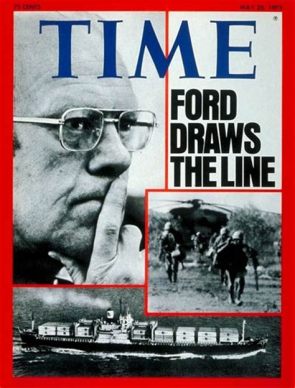 The cargo vessel was being towed to Kompong Som on the Cambodian mainland, as word of the incident reached the White House.  A government made to look weak and indecisive by what President Ford himself called the “humiliating withdrawal” of only days earlier, could ill afford another drawn-out hostage drama, similar to that of the USS Pueblo.  Massive force would be brought to bear against the Khmere Rouge, and time was of the essence.

Two destroyers and an aircraft carrier were ordered to proceed at full speed to the Gulf of Thailand, along with a contingent of Air Force fighters, bombers, and helicopters. A Navy P-3 Orion surveillance aircraft located Mayaguez anchored off Kho-Tang Island, 40 miles from the Cambodian mainland.

At least some of the Mayaguez crew were (mistakenly)  believed to be held on the island. Air force units air lifted a battalion-sized Marine rescue team to rescue the crew.  Meanwhile, the destroyer USS Holt was ordered to seize the Mayaguez, as the aircraft carrier Coral Sea launched bombing strikes against military targets in Cambodia.

Expecting only light resistance, US forces were met with savage force on May 15, from a heavily armed contingent of some 150-200 Khmere Rouge. Three of the nine helicopters participating in the operation were shot down, and another four too heavily heavily damaged to continue

US bombing raids accomplished their purpose on the Cambodian mainland. A fishing boat soon approached the destroyer USS Wilson under flag of truce.  Onboard were the 39 crewmen of the Mayaguez.

The situation was different on Kho-Tang Island. US forces were ordered to withdraw, as Khmere Rouge commanders pressed the attack. Air Force helicopter crews and Marine riflemen moved through heavy fire throughout the 15th, their defensive perimeter becoming smaller with the departure of every over-loaded chopper.

The cost of the Mayaguez Incident, officially the last battle of the Vietnam war, was heavy.  Eighteen Marines, Airmen and Navy corpsmen were killed or missing in the assault and evacuation of Kho-Tang Island.  Another twenty-three were killed in a helicopter crash.  The last of 230 Marines would not get out until well after dark.

No United States Marine would leave one of their own behind, either dead or alive. Not intentionally, but such discipline was impossible in the chaos of that night.  LCpl Joseph Hargrove, Pfc Gary Hall and Pvt Danny Marshall formed a machine gun team, guarding the right flank of the evacuation as darkness fell.

The team was last seen by Sgt. Carl Anderson Jr.. Later reports described the three as being out of ammunition and “scared”.  Anderson ordered the three to evacuate and they were preparing to do so, when last seen. Navy SEALs and Marines asked permission to go back and attempt a rescue, but permission was denied.

The government in Washington, touted the operation as a victory.

Joseph Nelson Hargrove turned twenty-four, the day he was last seen on that beach. In 2012, Khmere Rouge commander Em Son told Stars & Stripes that Hargrove was captured a week later, trying to steal food. He was shot and killed the following day, while attempting to escape. Gary Hall and Danny Marshall were captured a short time later, brought to the mainland and beaten to death by the Khmere Rouge.  Both were 18.

In 2011, Khmer Rouge platoon commander Mao Run claimed to have killed a US service man with a grenade, several days after the battle. Alone and exhausted, this may have been a fourth man left behind alive. The name of this man and the details of his final days, remain uncertain.

The last official battle of the War in Vietnam, etched the last 41 names on the Vietnam Veterans Memorial wall in Washington.

This is a long clip – about 28 minutes – but well worth watching.