So ended the only ground combat operation of WW2, on the soil of the Japanese homeland. And so it is, that an American submarine came to count a Medal of Honor and a Japanese locomotive, among its battle honors.

In the early phase of WW2, the traditional role of the American submarine service was to search, identify and report enemy activity to surface ships. Customary tactics emphasized stealth over offense, preferring to submerge and lie in wait over the surface attack.

Small wonder. The Mark XIV torpedo, the primary anti-ship submarine-launched torpedo of WW2, was literally a scandal. Not only was torpedo production woefully inadequate to the needs of the war in the Pacific, but stingy pre-war budgets had precluded live-fire testing of the thing.

Among the Mark-XIV’s more pronounced deficiencies was a tendency to run about 10-ft. too deep, causing it to miss with depressing regularity. The magnetic exploder often caused premature firing of the warhead, and the contact exploder frequently failed altogether. There must be no worse sound to a submariner, than the metallic ‘clink’ of a dud torpedo bouncing off an enemy hull.

On July 24, 1943, Lawrence “Dan” Daspit commanding USS Tinosa (SS-283) attacked the 19,000-ton whale factory ship Tonan Maru III. Tinosa fired fifteen torpedoes with two stopping dead in the water and the other thirteen striking their target. Not one of them exploded. Thinking that he had a bad production run, Daspit kept his last torpedo for later inspection. Nothing out of the ordinary, was found.

Commander Eugene “Lucky” Fluckey didn’t subscribe to the conventional wisdom. WW2 vintage submarines were designed for speed on the surface, and USS Barb (SS-220) was capable of 21 knots.  Equivalent to 24mph on land. Under Commander Fluckey, Barb was for all intents and purposes, a fast-attack surface craft. 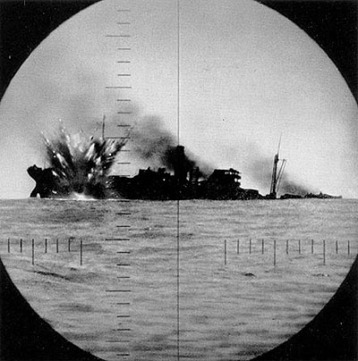 In January 1945, the Barb, USS Picuda (SS-382), and the USS Queenfish (SS-393) were ordered to the China Sea, blocking the Formosa Strait to Japanese shipping.

The merchant tanker Hiroshima Maru ran aground in the confusion.  SS-220 returned the following day, to finish the job. 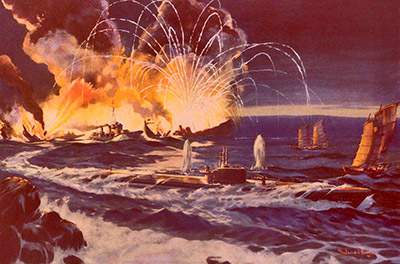 Two weeks later, USS Barb spotted a 30-ship convoy, anchored in three parallel lines in Namkwan Harbor, on the China coast. Slipping past the Japanese escort guarding the harbor entrance under cover of darkness, the American submarine crept to within 3,000 yards.

Fluckey gave the order and Barb fired her six bow torpedoes at the tightly packed convoy. Swinging around, she fired her four stern torpedoes, just as the first salvo slammed home. Four ships were mortally wounded and another three heavily damaged, as a Japanese frigate opened fire.

It took a full hour to extract herself from the uncharted, heavily mined and rock-obstructed shallows of Namkwan Harbor. Torpedoes meant for the American sub struck Chinese junks instead. A Japanese aircraft appeared overhead, just as Barb slipped out into deeper water. No wonder they called him “Lucky Fluckey”.

The episode earned Commander Fluckey the Medal of Honor in March, 1945. 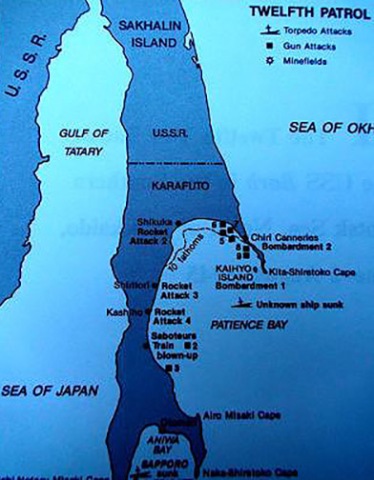 On completion of her 11th patrol, USS Barb underwent overhaul and alterations, including the installation of 5″ rocket launchers, setting out on her 12th and final patrol in early June.

For the first time in the history of submarine warfare, rocket attacks were successfully employed against shore targets, including facilities in Shari, Hokkaido; Shikuka, Kashiho; and Shiritoru. Barb also attacked Kaihyo To with her regular armaments, destroying 60% of the town.

By mid July 1945, USS Barb had racked up one of the most successful records in the submarine service, sinking the third-highest gross tonnage of enemy shipping of the entire war, and the highest in Japanese shipping, according to the Japanese’ own records..

In poring over a coastal map of Karafuto, the Japanese end of Sakhalin island, the answer as to what to do next, soon came clear. The American sub was going to take out the supply line to enemy merchant shipping, and use a Japanese train, to do it.

Steel plates were bent and welded into crude tools, and a team of eight volunteers was selected. There was so much excitement among the crew over the idea, that even the Japanese POW on board wanted to go ashore, promising he wouldn’t try to escape.

On the night of July 22-23, Fluckey maneuvered the sub into shallow water within 950 feet of land, and put two rubber rafts ashore.

At one point the team had to dive for the bushes, as a night train came through.

At last the work was done and, for the first time that night, the group disobeyed a direct order.  The other seven had been ordered to back off as Electricians Mate 3rd Class Billy Hatfield wired the switch and activated the bomb. That way only one man would die if things went wrong, but these guys weren’t going anywhere. Seven men looked on as Hatfield made the final connections, each wanting to see that this last step was done right.

Barb had worked her way to within 600′ of shore and the shore party was barely halfway back, when the second train came through. A thunderous explosion tore through the stillness, as night turned to day.  Pieces of the locomotive were thrown 200 feet in the air as twelve freight cars, two passenger cars, and a mail car derailed and piled together.

There was no further need for stealth.  With barely 6′ of water under her keel, Fluckey took up a megaphone, bellowing “Paddle like the devil!”  Five minutes later the shore party was on board.  As “The Galloping Ghost of the China Coast” slipped away, every crew member not absolutely necessary to the operation of the boat was on-deck, to witness the spectacle they had wrought.

So closes a little-known chapter of the war in the Pacific.  The only ground combat of WW2, carried out on the Japanese home islands. So it is, that an American submarine came to count a Medal of Honor and a Japanese locomotive, among its battle honors.

In addition to Commander Fluckey’s Medal of Honor, the crew of USS Barb earned a Presidential Unit Citation, a Navy Unit Commendation, the Asiatic-Pacific Campaign Medal with eight battle stars, the World War II Victory Medal, and the National Defense Service Medal.  Of all those awards, the one of which later-Rear Admiral Fluckey was most proud, was the one he didn’t get.  In five successful combat patrols under Commander Eugene Fluckey, not one crew member of the USS Barb ever received so much as a purple heart.